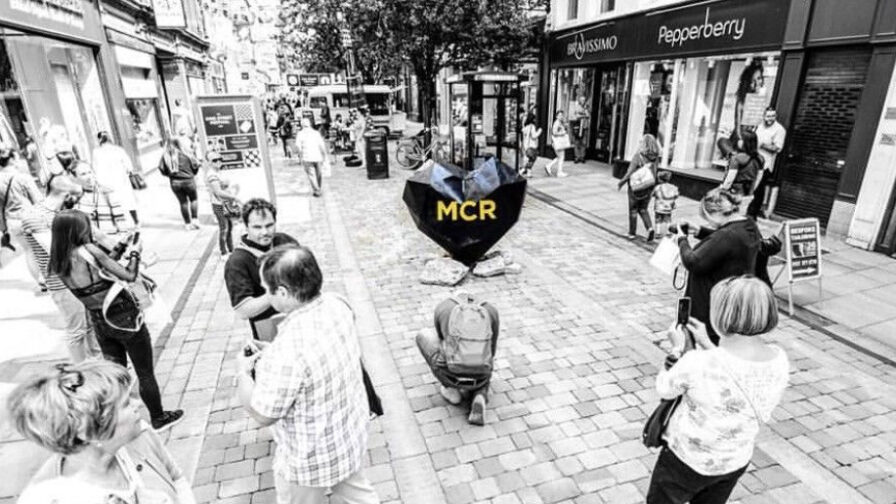 Manchester based designer Liam Hopkins is auctioning off his Manchester Heart sculpture, in aid of a local charity. Liam created the piece the day after the terror attack in Manchester Arena in May this year. It joined the many expressions of love made by Mancunians in response to the bombing, overpowering those of hate which the terrorist aimed to provoke.

For three weeks after its creation, the heart was then placed in several locations around Manchester city centre. After its tour, the work came back to Lazerian, Liam’s contemporary creative studio in Denton, where it has remained ever since. The original plan was to give the sculpture away. But realising the level of interest in it, he decided the best way to find a good home for it would be to auction it off.

Liam chose Forever Manchester to be the recipients of all the proceeds from the auction. Forever Manchester was established in 1989 and since that time has delivered well over £36 million into local communities, benefiting more than 1.1 million people in the Greater Manchester area.

The charity raises money to fund and support community activity across Greater Manchester, helping local people achieve extraordinary things. Forever Manchester guarantee that 100% of the monies they raise will stay in Greater Manchester and support local neighborhoods and communities. With a stated aim to focus on what’s strong not what’s wrong, they provide a hand up not a hand out.

Projects that Forever Manchester have supported are many and varied, ranging from weekly knitting groups, to empowering girls and young women, helping older people and the disabled, to homelessness, sports, environmental, education, and cancer support projects, plus everything in between. They also manage and administer a number of different funds supporting community activity across Greater Manchester.

It is Forever Manchester that in 2012 commissioned local poet Tony Walsh to create a poem that encapsulated the spirit of Greater Manchester, and celebrate the local community. The poem that he came up with was none other than ‘This is the Place,’ which he movingly read out at the vigil in Albert Square for the victims of the Manchester Attack. At the end of the reading Walsh beseeched the crowd to “Choose love Manchester.”

The poem has now been turned into a book, which has been released and is available to the public. More than 60 creatives from Manchester have each taken a phrase or line and created a page of the book, along with forewords from Tony Walsh and Andy Burnham, to honour the memories of those who lost their lives in the attack. The proceeds from the book will be split equally across the following three charities: Forever Manchester, We Love MCR Emergency Fund and The Greater Manchester Mayor’s Homelessness Fund. Liam Hopkins was one of those selected to contribute to the 88-page hardback book.

The Manchester Heart sculpture is a fitting tribute to those hurt and affected by the events of the 22 May. Made entirely of paper and glue, in Liam’s signature polygonal style, it was finished with lacquer to help it stand up to Manchester’s notoriously inclement weather.

Liam states that “It has held up well, but it is not in perfect condition. It has soul from the elements!” He could just as well be talking about Manchester’s residents; weather beaten, but surviving and enduring with spirit.
The auction is due to finish in the morning of Monday 9th October.