Manchester is hit hard by the overwhelming UK debt crisis 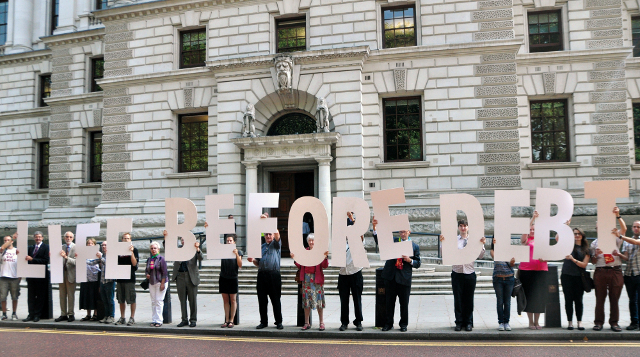 Britain is in the grip of a personal debt crisis, with an increasing numbers of families being caught in spiraling debt traps. Unsecured, non-mortgage, household debt is now at £239 billion higher than it was before the financial crash in 2008.

When it comes to those struggling with debt, Manchester is hit particularly hard with one constituency in the city coming third nationally for the high levels of over-indebtedness. The Money Advice Service define over-indebtedness based on answers given to surveys carried out nationally. Those that answer separate multiple choice questions with either of the following replies are classed as over-indebted:

Drilling down to constituency level we see that Manchester is over-represented at the top of the table, which contains 650 constituencies across the UK. Manchester Central is the third most over-indebted constituency nationally at 23.23%; Blackley and Broughton is 13th at 22.43% and Gorton is 22nd at 21.72%.

Debt Awareness Week (DAW), which ran from 27 October to 4 November this year, was marked by the launch of the Jubilee Debt Campaign’s (JDC) drive to disarm what they call “The Great British Debt Trap”.

The JDC has long been campaigning on issues of international debt since its foundation following the closure of the Jubilee Debt Coalition in 2000; now it has brought its campaigning experience to fight against over-indebted households’ debt in the UK. The campaign run during DAW called on the government to:

In Manchester the small JDC group was supported by members of the South Manchester Credit Union (SMCU), several founders of which are now councillors, who signed the petition with the campaign’s demands.  Cllr Sue Murphy, deputy leader with a responsibility for tackling family poverty, together with Cllr Suzanne Richards (executive member of Housing), concurred with Liberal Democrat councillor for Didsbury West, John Leech, who said:

“I am supporting this campaign because there are millions of families struggling to make ends meet and nobody should have to borrow money to put food on the table each week. When people do need to borrow money it should be at affordable rates and no one should be ripped off by the high interest rates that some lenders are charging”

An example of high interest rates was on display in the window of the Brighthouse store in Longsight, filled with Christmas offers to tempt those who don’t have the cash to buy outright. Advertised was a Nintendo Switch Pokemon console and games bundle with a basic price of £435.39. But to buy it at weekly payments of £7 over 130 weeks, the total cost came to £910 – with an annual interest rate of 99.9%.

Also taking part in the campaign outside Longsight Library were Rusholme councillors Rabnawaz Akbar and Jill Lovecy. Members of JDC and SMCU volunteers set up a stall outside the former RBS site in Chorlton, asking people to help end rip-off loans through signing the petition.

Gathering signatures daily across South Manchester during Debt Awareness Week, activists were often told personal stories of how debt had affected those signing the petition. One activist described how the need for this campaign was brought home to him when he was approached by someone living on the streets in the city centre who explained that debt was part of the background to his plight.

A cheerful middle-aged woman’s demeanor changed when she confessed to heavy debts which she couldn’t face dealing with. Telling her of unbiased professional help from the CAB being freely available didn’t seem to help. Another person told of a friend whose debt had ballooned into thousands.

Other local leaders also supported the campaign, including Manchester Cathedral’s Dean Rogers Govender and Gorton MP Afzal Khan, leading the way in the hope that their colleagues will follow.

High interest rates charged by unscrupulous lenders is just one factor increasing debt across Greater Manchester. Another is the austerity driven changes to the welfare system including the chaotic and much criticised introduction of Universal Credit (UC).

As reported in The Meteor last week, Charlotte Hughes campaigns against changes to social security every Thursday outside her local job centre in Ashton-under-Lyne. She spoke to a man who had his welfare payments sanctioned for eight months (which means no money for that time), for missing an appointment with his adviser. The reason he missed the appointment was to help his father move into a nursing home. He provided evidence of this but the DWP refused to accept it. This is just one of many stories Hughes has collected over the last four years that depict the callous bureaucratic nightmare that is today’s welfare system.

The Salford Star reported this month that 79% of housing tenants receiving UC in the city are in arrears, compared to just 34% of tenants who are not claiming UC. This is a common pattern seen developing wherever UC is introduced.

The disproportionate impact of debt on poor people has been underlined by the Institute of Fiscal Studies which found that 16% of those in the lowest 10% of the household income scale are likely to be in arrears on bills, compared to the richest 10% of the scale where only 1% are in arrears. The same study also shows that 12% of the poor households are likely to be spending more than 25% of their income servicing debt, compared to 5% for the richest households.

With winter coming on, things are set to get worse. The FT has reported that three million homes nationally owe money to gas and electricity suppliers, resulting in increased numbers of vulnerable households, many in poorly insulated homes, being pushed to decide between heating and eating.

It appears that this and previous campaigns against the debt crisis (and the mountain of statistics) may have finally filtered through to affect government policy. Philip Hammond, Chancellor of the Exchequer, made some partial concessions in his Autumn Budget on 29 October, promising a pilot of zero-interest loans for those tapped by high-cost providers and a 60 day “breathing space” for those with problems making payments. Whether these promises are kept and sufficient resources provided to enable them to be effective remains to be seen. Director of the JDC Sarah-Jayne Clifton responded to the promises made in the budget:

“It’s a welcome move if it takes off after the pilot, but the Government needs to go much further and rein in the rip-off lenders to whom so much debt is owed at the moment. That’s why we’re calling for a cap on interest rates and charges.”

The UN rapporteur’s statement on human rights in the UK was also not swayed by token gestures during the budget:

“The UK Government’s policies and drastic cuts to social support are entrenching high levels of poverty and inflicting unnecessary misery in one of the richest countries in the world.”

For a debt free future

The signature haul for the JDC campaign was good, with much public support and sympathy due to the widespread nature of the problem. But nationally, this and other campaigns in Debt Awareness Week were buried in the lately ubiquitous mass media reports on the Brexit saga and Trump’s tweeting career. Many local MPs are focusing their attention on Brexit and party point-scoring despite the obvious importance of the debt issue for thousands of their constituents. This makes it all the more important to bring in pledges of support from all politicians, which they can be reminded of in the future.

The massive reduction of public spending caused by austerity has weakened an essential pillar of our economy. The rise in personal unsecured debt is partly a response to that weakening. The Bank of England raised concerns this summer about consumer borrowing reaching heights unseen since before the financial crisis, growing at triple the rate of the annual growth in pay. UK households borrowed almost £80 billion over the last year, becoming net borrowers (they borrowed more than they earned) for the first time since records began in 1987. This situation feels inherently unstable. Our government instead of shouldering the weight that austerity driven cuts have burdened the country with, instead choose to hoist it on to the shoulders of those least able to bear it.

The latest JDC campaign covered one aspect, the regulation of unsecured loans, needed to solve household poverty. Insecure, de-unionised & low paid employment, cuts to welfare and the rocketing cost of accommodation are other important factors that conspire to make life economically difficult for people, especially the poorest. Saving before getting into debt, especially if done with a credit union, is clearly a better way, when it can be taken. Ease of access to these organisations should be promoted.

But in the world people find themselves, this often isn’t an option and the JDC feel they can’t give up on tackling the scandal by which the poorest in our society have to take the most expensive credit under the worst terms, entrenching them in poverty, enriching the already wealthy and increasing inequality.

Stephen Pennells is a member of the Jubilee Debt Campaign

To find out more about the Jubilee Debt Campaign – click here