Days of Hope: Manchester’s Mary Quaile reports on her visit to the Soviet Union in 1925

By Bernadette Hyland | 2 August 2017Friends of The Meteor 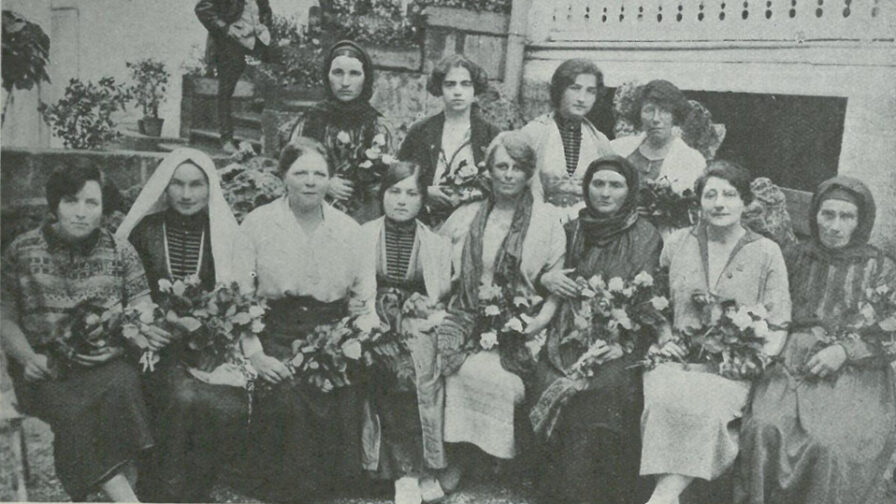 The year 2017 is the 100th anniversary of the Russian Revolution and it is difficult today to understand the hope that the revolution gave to ordinary women and men across the world. One of those women was Mary Quaile. An Irish immigrant who left school at 12, and,   because of her commitment to improving the lives of  women and her class,  dedicated her life to political activity. She went on to take leading roles within the Manchester  and the national trade union movement.

From April – July 1925 she led a delegation of women from the TUC across the USSR.   You can read my article about this  here. Christine Coates,  former librarian at the TUC,  kindly alerted me to an article that Mary wrote about her trip in the monthly journal  “Trade Union Unity”  in August 1925.  This journal is available at the Working Class Movement Library.  Here is the article:

Our Women’s Delegation to Russia

The visit to Russia of six British working women is a milestone on the road to international Trade Union unity. It will long live in our memories and also in the memories of the thousands of workers that greeted us wherever we travelled in that great country. We left London on April 23, and were met in Riga by comrades from the Central Council of the Russian Trade Unions, but our first great welcome came when we stopped at the first town across the border from Latvia.

Women were there in hundreds, many of them with bunches of wild flowers to give to their British sisters, all of them wanting to shake our hands, some with tears in their eyes, not of sorrow , but of joy at our meeting. There also came to greet us children, the pioneers of the new social order, which will emancipate the workers of the world. It was Sunday, but these workers in their hundreds had been out early planting their trees to give value and beauty to the country they now owned. This was voluntary work, but it was done in the willing spirit that afterwards we met with so often in Russia.

Moscow was reached a day sooner than was expected, but a tremendous welcome awaited us with bands, banners, flowers and speeches. One was glad and proud to be a member of the class that demonstrated so plainly their love for the women workers of Britain. Our tour of Russia took us to Leningrad, back again to Moscow,down through the Ukraine via Kharkoff, and then to the Don Basin, the Crimea, Rostov, Kislovodsk, Grozny, Baku, Tiflis, Borjom, Akhaltsikh, Abastuman and Vladikavkas.

After many personal talks with the workers of all trades and grades,including peasants and agricultural workers, we have no hesitation in saying that the Soviet Government not only has the enthusiastic support of the vast majority of the workers and peasants, but that both these classes of workers look upon the present Government as essentially their own. There is certainly a dictatorship in Russia, but it is a  workers’ and peasants’ dictatorship. The Russian Communist Party is undoubtedly the directive force, but it is the workers and peasants  through their elected soviets or councils that rule.

Women are encouraged as far as possible to enter all classes of work, and for equal work they receive equal pay. Their entry into industry is facilitated by the fact that most factories have nurseries and kindergartens attached  where the women can leave their children to be cared for by skilled attendants, and this in most cases is free of any charge.

In addition to this every month every woman factory worker gets two months leave of absence before and after the birth of her child, with full wages. All sorts of other benefits, such as food and clothing, are provided.

Workers’ canteens or communal dining rooms help to make the domestic drudgery very much less for working wife or mother.

The health of the worker is a first charge on industry, and rest homes and sanatoria are a feature of Russian life which will give the workers a better chance to carry on their great work of reconstructing their industries and abolishing many  of the evils inherited from the capitalist regime.

The workers showed a very lively interest in the cause of Trade Union unity, as the tremendous May Day demonstrations which we witnessed in Moscow made clear to us. We were asked many questions about the chances of a real international United Front. They see in this movement  a chance for the workers of all countries to emancipate themselves from capitalism and also to afford greater protection for the Russian workers from the many machinations of the imperialist Governments of the world.

The British workers have in the past often stood by the Russian workers. Let them once more lead the way in a movement to strengthen and protect the pioneer Worker’s Republic. Let us appeal to the leaders of our workers’ movement to come together, and with their great organising powers, set themselves the task of understanding and building up the united Trade Union organisation, national and international, that is so necessary to the working class of the world.