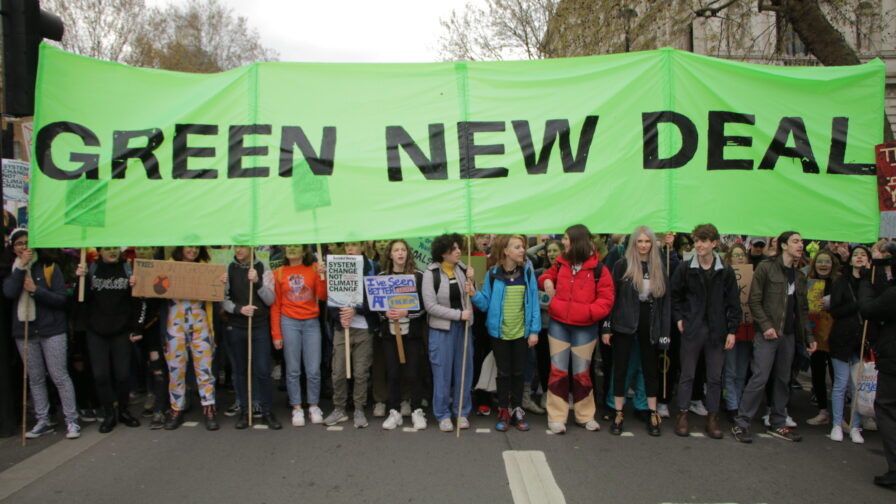 Greater Manchester Labour for a Green New Deal believes that the fight against climate breakdown is one in which mutual support is imperative — the GND Councillor Support Network is their contribution to that fight.

We established Greater Manchester Labour for a Green New Deal (GM LGND) two years ago with the purpose of bringing together climate-conscious Labour Party members who seriously engage with the sheer scale and urgency of the threat that we now face, and to campaign to put the climate at the front and centre of Labour politics.

We understand that climate breakdown is a global crisis necessitating a global response. However, climate change is an inescapable fact of life in Manchester, evidenced by the Saddleworth Moor fires last year, and the floods of Storm Christoph. Global action is thus intrinsically connected to the accumulative ecological work of communities and local government.

We have been active in educating one another on climate change. In the time since we formed, we have engaged in discussions on the dangers of climate breakdown and have extensively discussed how to formulate the best possible Green New Deal (GND) — a policy programme that is truly capable of mitigating the dangers that are already on our horizon. In the process, some of our members launched the ‘MCR GND Podcast’, which has hosted an array of illustrious guests like Jeremy Corbyn, Julia Steinberger and Kevin Anderson to delve into the issue of climate breakdown.

Others in our group have been engaged in research and writing, publishing pieces across a range of local and national media outlets such as The Meteor. This educational activity truly has been mutual; in addition to developing and exploring our ideas around what a GND can look like, both the podcast and our journalism has also been mobilised to platform and extend solidarity to many other local environmental campaigns across the conurbation.

Accompanying our educational drive has been a deep commitment to political praxis, resolved as we are to building practical solutions to the joint crises we currently encounter. Last year, in the midst of the worst of the pandemic, some of our members teamed up with a worker’s cooperative, Red Coop, to launch a retrofit project that helped laid-off theatre workers retrain in retrofitting. The ‘Retrofit Get-In Project’ made national news and was recently highlighted in Ed Milliband’s new book, ‘Go Big: How To Fix Our World,’ as an example of exactly the kind of project that the national and local government should support.

Our successes notwithstanding, with the current lack of radical thinking at all levels of the state — and the woefully inadequate funding from the government — these grassroots projects can only be limited in their scope and scale.

GM LGND is extremely fortunate to already count academics and environmental sector workers among our number, and to draw extensive knowledge on many climate-related issues from their expertise. Over the past few months, we have begun to build relationships with experts from across Greater Manchester; from local economic economic strategy experts, to sustainability academics, to urban environmental developers. The culmination of this networking has resulted in our new project: The GM LGND ‘Councillor Support Network’.

Greater Manchester has seen a recent flux in climate-conscious politics. The 2020 local elections have shown that many Labour Party councillors are aware of climate breakdown, and that they understand that climate and biodiversity have to be intrinsically connected to local government politics. However, many councillors that we have spoken to feel that they often do not have access to the expertise which can help them make informed environmental policy decisions that are capable  of addressing and beginning to tackle climate breakdown.

This is where we can help. From launch, the network is accessible to any GM Labour Cllr in need of advice or support on any environmental matter, in the quickest possible time. Currently, we have around 15 experts that cover an extensive range of environmental knowledge. This portfolio of expertise includes: retrofitting, fair and just employment, climate education, pesticide phase-out, disability justice, recycling, urban planning, biodiversity, climate policies, circular economics, community wealth building & procurement processes and even more. Whatever support a Cllr requires to implement municipal Green New Deal policies, we can provide.

We will endeavour to answer within 24 hours for general advice, or will give you a timescale for issues where appropriate.

It is important to note that this is a voluntary network, which may mean delays on occasion, due to expert availability or volume of requests, but we will, at all times, aspire and work for the greatest efficiency possible.

As we grow we will also need more experts to join the network. This will not only bring in even greater and more expansive fields of knowledge, but it will also help to lighten the load as, we hope, more councillors access the network. Therefore, if you are an academic who specialises in an environmental area or someone who works in an environmental field and would be willing to help support progressive councillors, we would love to hear from you.

GM Labour for a Green New Deal believes that the fight against climate breakdown is one in which mutual support is imperative — the GND Councillor Support Network is our contribution to that fight.

By Adam Williams and Sean Benstead