By Guest Writer | 20 February 2020Friends of The Meteor 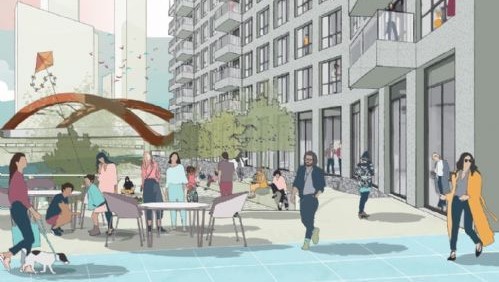 Salford City Council is set to approve an outrageous £4.752million subsidy to the English Cities Fund, or ECf, to build a 23 storey block of apartments off Stanley Street that will feature ‘no affordable housing’.

The ECf, is a partnership that includes the financially massive Legal and General company and Muse Developments, and the funding is coming from the Development Trust Account which was supposed to help build affordable housing. Guest article from the Salford Star.

Salford City Council’s relationship with the English Cities Fund, or ECf, will take another incredibly sick turn next week if City Mayor Paul Dennett signs off a £4,752,484 subsidy for the organisation to build 211 unaffordable apartments in a 23 storey block off Stanley Street down in what is dubbed ‘New Bailey’.

Planning permission for the development was granted last October (see here). The ECf is a partnership between the financially mighty Legal and General, Muse Developments and Homes England, with cheerleading by Salford Council. When the project was set up to develop along the Chapel Street and New Bailey, rather than pay Section 106 money for things like infrastructure and affordable housing, a secretive fund called the Development Trust Account, or DTA, was created.

…Except that, as far as the Star can figure out, none of it has been spent on affordable housing. Instead, millions of pounds have been taken from the fund to subsidise the building of unaffordable properties…The Salford Star reported in June last year that £6.437million was taken from the DTA to build 167 apartments and eleven townhouses on Chapel Street opposite Salford Cathedral and branded Atelier Homes.*

Now, £4.7million is set to be taken from it to build this latest unaffordable block to keep ECf’s profits high… “Under the terms of the ODA [Overarching Development Agreement], ECf are entitled to a return of 15% on development costs on each phase” states the Salford Council report.

“Each phase is subject to a viability test and ECf are only obliged to proceed with any phase where it is shown to be ‘viable’ i.e. where ECf should get back all phase-specific development costs and a full developer’s return.

“The report adds that “Recently, the commercial developments at New Bailey have contributed to the DTA whereas the residential schemes have drawn from it…”And none of these schemes have included affordable housing, including this one, despite the ODA stating that “Any surpluses generated are then deposited in the DTA for use on items such as affordable housing and public realm…”

It seems like the ECf is trying to spend up the Development Trust Account before the end of its lifespan, as anything left in the account at the end of scheme gets split 50-50 with the Council. The report apologises that “ECf are aware of the burden being placed on the DTA and are reviewing the wider residential/commercial mix within the ODA area…”

After this latest subsidy to mega-minted financial companies is agreed, it will be over £11million taken from the Trust Account which could have been spent on what the City Mayor keeps calling an ‘affordable housing crisis’ in the city. By the end of the ECF project the Salford Star will bet that not one single affordable property has been built.

Meanwhile, the process, the Council maintains is ‘transparent‘… “…As with all the ECf project schemes an open and transparent process will be undertaken to confirm actual costs against the estimates in the appraisal and the actual DTA contribution /credit is only crystallised at financial close…”

Except that the press and public are kept out of this ‘transparent process’, with all details kept secret.

At the same Salford Council ‘Regeneration’ meeting that will approve this outrageous subsidy next week, the ‘private sector partner’ for the Crescent and University Masterplan will also be appointed – with all details again kept secret as the agenda item appears under Part 2 – Closed To The Public.