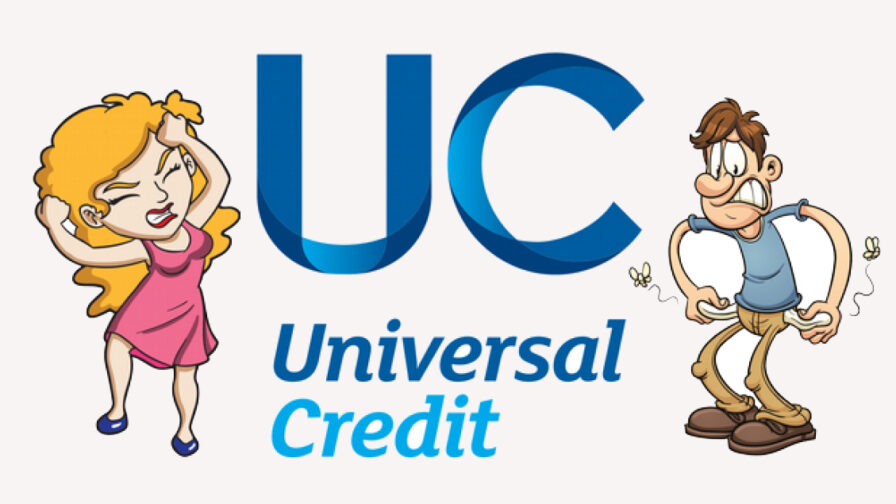 Disabled People Against Cuts (DPAC), an activist group fighting against austerity, have been particularly damning of Universal Credit, with Paula Peters from DPAC’s national steering group describing it as “conscious cruelty with punitive sanctions… at the heart of it”.

In April this year members of GMUCB, DPAC and other Manchester community campaign groups joined forces to denounce Universal Credit by chalking slogans across St Peter’s Square, and presenting a letter to Manchester Town Hall demanding an end to tenant evictions caused by lengthy waiting periods for Universal Credit payments.

Unite Community is a branch of Unite the Union that gives people not in regular employment the benefits of being a union member. Jan Pritchard is the secretary of GMUCB, and was present at the demonstration in St Peter’s Square. Pritchard has been campaigning against Universal Credit since it was first introduced as a trial in Ashton-under-Lyne in 2013 and says the branch created the guide to:

“Give as much guidance as possible to claimants about the complexities of the UC benefit system, which have caused a huge amount of financial misery.  The guide explains how UC is supposed to work, and how claimants can avoid the many pitfalls that they are likely to encounter, and who they can contact for support and advice.”

There has been a steady stream of press reports critical of Universal Credit (UC) since its inception, linking it to increasing rent arrears, homelessness and benefit sanctions. Perhaps the most damning criticism came in a report from the National Audit Office (NAO) in June, which prompted Labour MP Frank Field to call Universal Credit a “shambles, leaving a trail of destruction in its wake”. The NAO report on UC found that:

The guide published by GMUCB also sets out the union’s opposition to UC as it currently stands, as Pritchard explains:

“We think the Universal Credit system should be scrapped and replaced by one that is fairer and more humane. Thousands of people on Universal Credit have been adversely affected by getting sanctioned, being left with no money to live on, getting into further debt, losing their homes, and in some instances, committing suicide.

“Until it is finally scrapped, we support the campaign to make any changes that might alleviate the misery, including: making sure there are no delays in benefit payments, letting people apply for UC in a Job Centre not just online, having an option to ensure landlords get paid directly from a benefits payment to stop people getting into arrears and ending benefit sanctions.”

Anyone wanting a printed copy of ‘How to Survive Universal Credit’ can pick one up at the Wigan Diggers Festival, on 8 September, where Greater Manchester Unite Community Branch have a stall this year.