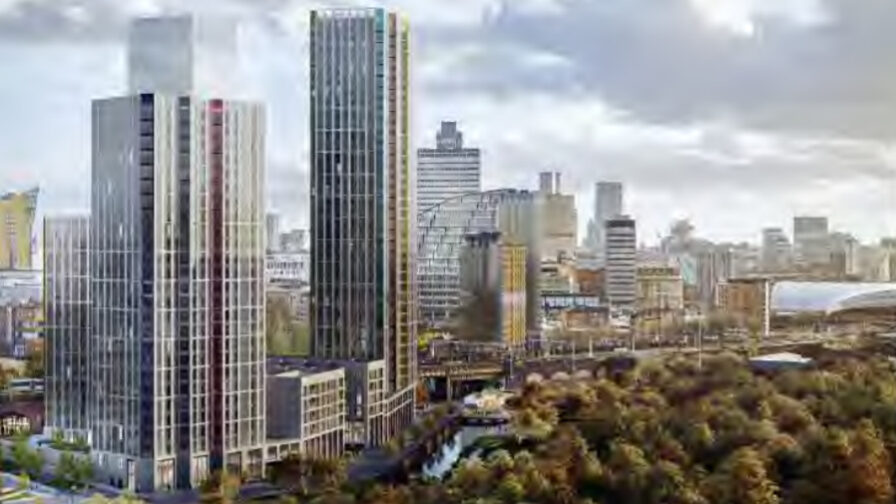 The Eastlands Arena goes before the planning committee for the first time tomorrow, while co-living towers and Thomas Street demolitions return for another round. The Meteor recaps the most important proposals.

A number of controversial proposals are up this week at tomorrow’s planning committee. Read more about the Eastlands Arena here, the biggest ticket item. Below are the other proposed developments you should know about.

Following the Eastlands Arena, the largest development set to go before Manchester’s planning committee is a co-living development consisting of four 10 to 45 storey towers. The proposal plans to occupy undeveloped land between First Street and the Mancunian Way.

The August planning committee ‘minded to refuse’ the application because of the impact on neighbouring residential areas in Hulme and because the development is in conflict with policies on current space standards and previous reports from the Executive.

Deansgate councillor Marcus Johns spoke strongly against the development which he said “is far too tall and would have a severe impact on neighbouring communities and listed buildings. It is egregious and unnecessary overdevelopment … We fear that these proposals are simply HMOs in the sky and do not contribute positively to our city centre or our wider city.”

As the Meteor has reported, co-living is a new concept in the UK, with an Executive report from last year cautioning against approving too many of what was dubbed an ‘untested concept.’

The development also became controversial for its 875 studio apartments, which make up 37% of beds within the proposal. These rooms, to be rented at full price, are significantly smaller than Manchester’s living-space guidelines.

The development includes no affordable housing.

A viability report values the First Street development at £301 million. After construction, the property will be sold to investor purchasers as a rental product. Projected revenues are redacted from the report. Downing Living expects to net a 15% profit of £45.2 million.

‘T1’ Co-living development is back

The second of two separate co-living developments on Water Street, near Granada Studios, is a 32 storey tower containing 390 co-living apartments and studios. The developers, Vita Group, a are large owner/operator company which runs a large portfolio of premium student housing and city centre apartments. Vita group also enjoy the services of Sir Howard Bernstein, the former MCC executive who joined as a non-executive chairman last year.

While a similar proposal, T2, was approved in July,  T1 was rejected by councillors as most rooms break rules on minimal living space. Union T1’s two-bed flat size is a full 16 square meters smaller than housing guidelines while studios are even smaller.

The developer justifies the small spaces by arguing that smaller studios will not be rented as permanent homes. The proposal was rejected again in August and returns this month with no changes.

A redacted viability report values T1 at £120.9 million. If approved the tower will be sold to investors as a rental product with net rental revenues (with cost subtracted) of £5.3 million per year while the developer reserves a 15% profit of £18.1 million.

For several years a row of former weavers cottages situated on the bright and bustling Thomas Street and the corner of Kelvin St, have been unoccupied. Due to years of neglect, several had fallen into dangerous disrepair and were partially demolished in 2018.

Manchester-based Real Estate Investment Partnership (REIP) proposed a five-story mixed development of flats and shops. Crucially REIP argued the development was “unviable” if the cottages were preserved and requested they be demolished to facilitate the proposal.

These plans were strongly rejected by residents and were unanimously rejected by councillors in August. The proposal returns with no amendments. Planning officers still recommend approval though councillors and residents have suggested the site instead be renovated into studios for local artists and a northern quarter heritage centre.

The first development of the Northern Gateway is brought by Hong Kong-based developer Far East Consortium (FEC). The proposal, consisting over three 18-37 storey towers could be built along Dantzic Street between Angel Meadows and the River Irk.

The Northern Gateway, a joint venture between Manchester Council and FEC, involves a plan to build 15,000 homes across Collyhurst, Smedley, and the Irk Valley of which 20% will be made ‘affordable.’

However, FEC’s first Gateway development will include only 32 affordable homes (5% of the total) for sale through shared ownership. The majority will be sold at the market rate. FEC predicts a healthy profit of £24.5 million or 16.9% on costs. The development is valued at £185 million.

Regeneration developers ENGIE Services Ltd & Landcare plan huge neighbourhood-sized redevelopment of 410 homes and apartments to occupy the site of a former dye works in Miles Platting. The land, half-owned by Manchester City Council, is situated near Rochdale Canal and the nearby Ethiad campus.

72% of the development will be full price build-to-rent and have already been ‘pre-sold’ to investors. ENGIE projects an annual rental profit of £2.7 million per year.

The remaining 114 ‘affordable’ homes will be sold at market price to social landlord One Manchester. The development includes no social rent homes and only 19% will be ‘affordable’ rent, normally discounted at 80% of full price.

The development is valued at £79 million; however, the developer only projects a profit margin of 10% (compared to 15-20% which is typical). To ensure the developers profit, the council has been asked to sell their land stake at a discount rate.