Castlefield Viaduct: Manchester’s new park in the sky could transform the city – but who will benefit? 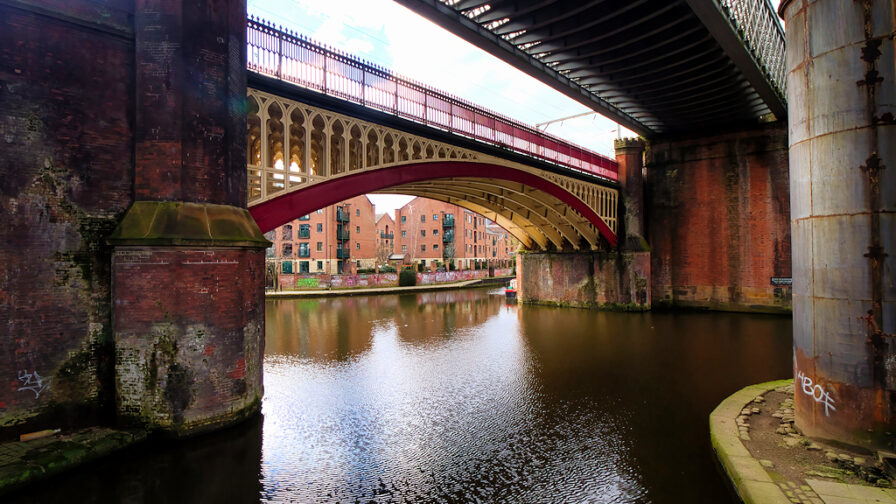 This week's guest article is by Ian Mell, Reader in Environmental & Landscape Planning at the University of Manchester. He considers the possible impact of the city's new sky park, and whether the benefits will be enjoyed by all Mancunians.

In July 2022, Manchester welcomed the newest addition to its roster of urban parks. Owned by the National Trust, the Castlefield Viaduct is a Grade II-listed, 19th-century railway bridge that has been redeveloped into a new 330m-long sky park.

The project is part of a wider repurposing of brownfield and former industrial space in Manchester with several other projects promoting the city as a go-to place for innovative urban development in housing and green and open space. Under construction, in particular, is Victoria North, a new neighbourhood of 15,000 new homes across a 155-hectare site in the north of the city. This includes City River Park, a huge new “recreational corridor”, according to the proposals, along the River Irk.

For now, the National Trust is operating Castlefield Viaduct as a 12-month trial. Entry is free but ticketed and limited to 100 visitors per day on allocated one-hour slots each afternoon. Due to the extensive publicity campaign, high demand has led to the National Trust website crashing.

The idea behind the trail is to generate political and financial support to create a longer park extending westwards (the current layout only covers a proportion of the total viaduct area) and make it permanent.

Initial reactions to the Castlefield Viaduct have been positive. Local charity Castlefield Forum, which is set to have its own community plot on the bridge, has launched a podcast to tell the area’s stories.

Access to green and open space is urgently needed in central Manchester. However, as my research on access to nature and regeneration shows, there is no guarantee that simply having green space makes people use it. Location, access routes and amenities all influence usage. Exactly who stands to benefit from a project like Castlefield Viaduct becoming a permanent feature of the city skyline is a crucial question.

Built in 1892, the bridge was left derelict after 1969, when Manchester Central Station, now the Manchester Central Convention Complex, was taken out of service. Repurposing an abandoned site with little access, socio-economic worth or ecological value into a public park is a sign that Manchester city council, the landowner of the viaduct, is willing to test new approaches to urban greening.

Initial designs for the site were drawn up by London studio Twelve Architects. Founding director Matt Cartwright explained in 2021 that the brief included creating “moments of joy”. On a recent visit, I found the site is divided into three distinct zones linking the viaduct’s past, present and future journeys.

The opening section draws on the railway motifs of trellis architecture to guide people into the site. The second introduces the 3,000 planted species – from cotton grass and ferns to fennel, Broom and fleabane – in a range of planters, highlighting the biodiversity of the local environment.

The third, meanwhile, which you can currently see, but not access, from the visitors centre, offers views on to where the site may go physically and conceptually. These various spaces blend with the sound of the passing trams. You are keenly aware of being in both a park and in a layer of the city’s history. The linear nature of the site underscores the notion of travel between the zones – as a visitor, you walk there and back again.

Castlefield is thus doted with a unique conceptual motif and a novel industrial aesthetic, as compared to other parks in Manchester. It remains to be seen, though, whether the design and the fact that it is located in an area of largely privately rented and owned flats will attract locals or serve primarily as a tourist attraction for visitors.

When the 606 linear park opened in Chicago in 2015, local residents reportedly expressed fears they would be priced out of their neighbourhoods. Reports in 2020 revealed that the park had indeed triggered luxury developments and long-term local residents being displaced. Research shows how similar developments, including New York’s High Line, can lead to what economists have dubbed eco-gentrification.

Research has also shown how much need there is for green space in Manchester. The city centre currently has very few public green spaces, and even fewer that provide play facilities or access to nature. According to Friends of the Earth, over 73% of people across Manchester have poor or limited access to a personal garden or a communal green space. Covid lockdowns highlighted how significant this lack of access to green space is, especially for those with families.

The redevelopment of the Castlefield Viaduct presents an interesting conundrum for Manchester and other UK cities. High-quality and potentially exclusive locations that are inaccessible can nonetheless act as a catalyst for green-space investment linked to regeneration programmes like Grosvenor’s Living Cities. This strategy provides increased certainty for investors but primarily serves specific communities, that is, those who can afford market-rate apartments.

We also need to look beyond the financing of high-end projects towards a more locally attuned approach to green space provision. Urban planning expert Meredith Whitten has shown how this would focus on local provision for meeting people’s everyday needs to interact with nature, play outside and live in a biodiverse landscape.

This requires sufficient public funding to be allocated to local government to support capital and revenue spend on public parks –- something not seen in the UK over the last 12 years.

By drawing on the industrial heritage of the city, Castlefield Viaduct makes strong links to its fabled Cottonopolis heritage. The park also sets out a bold statement of intent, that redundant spaces in Manchester can be meaningful, accessible and interactive. Of course, integrating industrial chic with urban regeneration is nothing new. But it is new in Manchester. This could be the start of something beautiful.