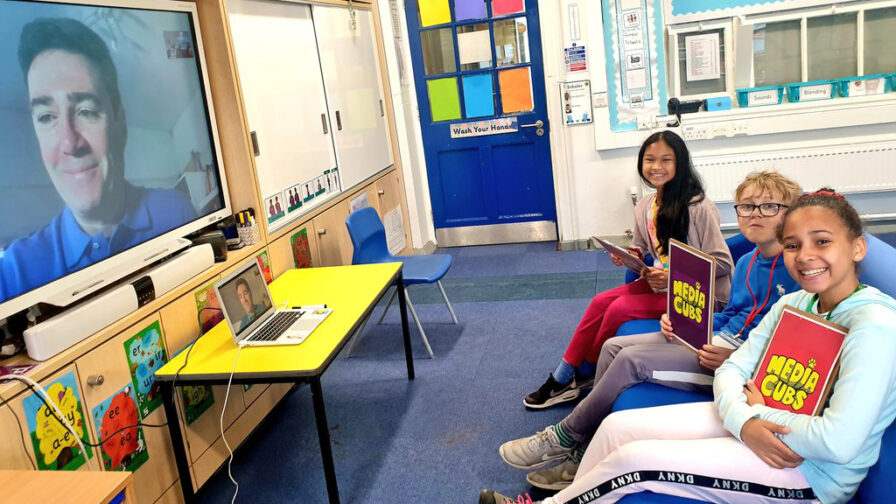 Mayor of Greater Manchester Andy Burnham and children’s commissioner of England answered Manchester Media Club mini-reporters’ questions in live press conferences and encouraged them to keep trying to have their voices heard.

The six students from Woodheys Primary School in Trafford and members of Media Cubs, are leading a campaign called Raise Your Hands, as they and their classmates feel ignored and left out of consultation about their Covid-19 future. They sent videos to UK prime minister, Boris Johnson, asking him questions on his Covid-19 strategy. The prime minister’s office has yet to respond.

Mayor Burnham agreed to meet three of the Media Cub reporters, Aisya Nazim, Jack Day, and Sam Mounfield in a Q&A Zoom press conference on 6 July to address their concerns.  They represented their classmates with queries about libraries, exams, vaccines, sports, the economy, and support for teachers. One question posed by them was “Was our route [the governments] the most efficient ways to curb the Covid-19 outbreak?”

During the press conference, Burnham gave the government’s performance a 5 out of 10, and said:

“I have some sympathy with the Government, it is obviously a very challenging thing to do, to deal with a situation like this, however, I don’t think they have got everything right, I think they have made mistakes.

“I think one of the worst mistakes they made was when one of the people in Downing Street broke the rules and they didn’t deal with that situation properly. They haven’t used people outside of Government enough, likes councils. They have tried to do it all themselves from London and I don’t think that was the right thing to do. They didn’t prepare enough; they didn’t buy enough protective equipment.”

Burnham addressed their concerns about school by acknowledging that:

“Some students get more help from home than others and I think that there is an unfairness that some children might lose out now because they don’t have the same facilities at home or maybe they don’t have access to a computer at home…so that those who missed out should get a lot more help to catch up.”

The mayor praised the Media Cubs initiative for making the voice of young people heard and believed the children should have been involved more in the discussion’s around planning for education during the Covid-19 crisis.

When asked what kids could do to help get through the pandemic, Burnham said that he felt that young people had been the most affected by the crisis, but he has been impressed by how young people have been supportive and positive. He pointed out that everyone could take inspiration from footballer, Marcus Rashford, who stood up for kids who often get ignored, by lobbying for the continuation of free school meals and that Media Cubs was also representing children by speaking up for them.

Media Cub reporters, Frankie Grindrod, Tom Snell, and Mya Willis met up with Anne Longfield, children’s commissioner for England on 16 July for a press conference to ask questions posed by their classmates. They represented their classmates with queries about the different ways schools have been operating, facemasks, big gatherings and social distancing. One of the questions asked was “When will schools go back to the way they were before Covid-19?”

Longfield said that she has been keen for students to get back to school as soon as possible and that there are also:

“…a lot of children that don’t have access to laptops, or broadband, so they just can’t get online at all…. if there is another lockdown or a localised lockdown, I would like it to be made clear on what children can expect from the arrangement with schools. It would be much more helpful if everyone had a similar level of engagement.”

She felt that in September, “all children of all ages will be in schools… It will be different because there will be more safety and emphasis on hygiene. It might mean that you can’t travel around the school as much and the desks might be laid out differently and teachers maybe a little more distanced physically from you, but I hope ….to see children get the normality back in their lives.”

In reply to the question asking why schools were closed in the first place, if they could open in September, the Children’s commissioner said:

“In some countries schools were closed. Sweden, Iceland, Estonia, I think, they actually kept schools open, but most countries closed the schools and I think on balance that was right decision because we didn’t know much about the disease, ….and it is not just children being in schools, it is teachers being in schools, and also parents and families taking children to school, dropping them off and traffic around. ….What I think we know now more on how to put safety mechanisms in place and the transmission rate and infection rate has dropped a lot, so it is different now…”

Longfield explained why it is still more difficult to be with friends outside of school, since schools provide a very structured environment, limited movement, and being able to trace who else is in that school. She argues that for some children who do not have access to unrestricted space, it has been very difficult and that we should “open spaces for children and families to be able to go.”

The mini-reporters wanted to know why the prime minister was not answering their questions. The children’s commissioner replied that, there have been a number of press briefings involving young people with prime minister’s in other countries:

“Denmark did it, Norway did it, New Zealand did it and actually dedicated one of those to children, talking to children, reassuring them and answering questions and that is something that I have been wanting and asking the PM to do, and would still like him to do.”

Longfield encouraged the students to “carry on asking politicians to talk, that is a very good thing” concluding that it has been a tough time for everyone but especially difficult for children.

Led by a mum, Kirsty Day, Media Cubs works with kids aged seven to 11 to introduce them to creative challenges, including photography, newspaper reporting, TV interviewing, and more.

The 39-year-old from Sale, said: “The kids were amazing in their first press conference, I am so proud of them. They gave the Mayor a bit of a grilling, but he gave full, open and honest answers. Maybe young people should always be the ones asking the questions of those in power? “

“They, like anyone else, teachers, politicians, parents should be given a say on their future, which is why we were delighted for them to be involved in the Media Cubs Raise Your Hand campaign…

“They deserve answers [and] to be heard at a national level. Other countries have held briefings with young people so why not here? I am so proud of all the pupils at Woodheys and how they have dealt with this unprecedented situation with maturity and compassion. Learning is a two-way process and us adults can learn a lot from them, they always bring a new perspective to any debate.”