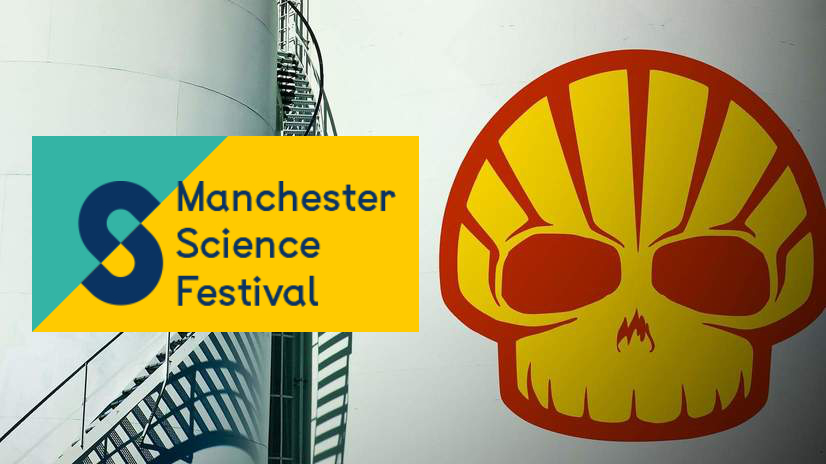 The Carbon Co-op announced their withdrawal from the 2018 Manchester Science Festival after the Museum of Science and Industry (MSI) announced that part of the festival would be sponsored by the oil company Shell. The community retrofit and renewables firm was a partner in MSI’s exhibition on Electricity, which will be part of the festival. Carbon Co-op are “hugely disappointed” that a public science event is being used to promote an oil company, and so are withdrawing their support.

At the same time, a public letter opposing the sponsorship has been signed by a large group of prominent scientists, artists, campaigners, politicians, local organisations and representatives of communities affected by Shell’s activities. Many had already approached the museum privately through a joint letter on the 9th of July, asking them not to partner with an oil company. But in a response today the museum refused their request, and did not acknowledge or engage with any of their concerns.

The summer of 2018 has already drawn unprecedented levels of attention to the growing effects of climate change, with record breaking temperatures and serious moorland fires in the hills surrounding Manchester.

Last month, almost 50 leading climate scientists, naturalists, and representatives of affected communities submitted a formal complaint to the Science Museum Group (of which MSI is a member), accusing it of’undermining its integrity as a scientific institution’ by partnering with BP, Shell and Statoil despite their continued contribution to climate change. The complaint presented new evidence showing the museum knew about sponsors’ ties to corruption and climate disinformation but signed deals regardless. At the same time, research and campaign group Culture Unstained launched a website detailing multiple reasons why Shell and other oil companies are inappropriate sponsors for museums.

Carbon Coop’s move comes in the wake of other high-profile withdrawals from major cultural events sponsored by unethical companies. In March, BAe Systems was forced to pull out as sponsor of the Great Exhibition of the North following an outcry from musicians and presenters including Nadine Shah and Lauren Laverne.  And just last week, over 40 artists removed their work from the Design Museum’s Hope to Nope exhibition after the museum hosted an arms trade event.

Jonathan Atkinson from Carbon Co-op said: “Our core mission is around developing ways to address the causes and effects of climate change. It is hugely disappointing that Manchester Science Museum have chosen to align themselves with a company that holds significant carbon reserves, with a historic position in denying climate change and a responsibility for tackling the issue.”

Naturalist and Broadcaster Chris Packham has signed the letter in support of our campaign stating that: ‘As the world swelters and wildlife struggles in this unprecedented heatwave, MSI has decided to partner with Shell, one of the corporations responsible for fueling climate change. A museum dedicated to science education should not be helping promote any company that is actively exacerbating this planetary emergency until they show a serious proactive drive to switch to renewables . And thus far this is not happening.’

We are writing as a group of prominent cultural and environmental organisations, concerned citizens, academics and researchers, to raise our deep dismay at the news that Shell is being announced as lead sponsor for Museum of Science and Industry’s (MSI) forthcoming Electricity Exhibition.

There are a number of reasons why we believe reputable cultural institutions should not enter into sponsorship deals of this nature:

Most obviously, continued fossil fuel exploration and extraction is at odds with preventing climate change. With at least three times more fossil fuels in existing reserves than can be burned if the worst consequences of climate change are to be avoided, we believe the companies that hold these reserves and participate in their continued exploration and extraction should have no role in the future energy system. As the world suffers a record-breaking and deadly global heatwave, the need to transition away from fossil fuels could not be clearer.

Secondly, the oil industry has a history of funding groups that have sought to discredit climate science and lobbying against concerted multilateral action on climate change. They have made huge profits from fossil fuel extraction whilst their own research demonstrated the harm of these activities.

We believe MSI has an important role in inspiring children and young people to become the climate scientists and energy system engineers of the future. Fossil fuel companies have no role in that future. The association of respected cultural institutions such as MSI with fossil fuel firms provides such companies with a sheen of legitimacy to continue acting in a way that damages the health of citizens and endangers the environment on a global scale.

Whilst understanding the need for institutions to raise much-needed income via sponsorship, we believe there must be ethical limits and that taking money from oil companies today is comparable to taking money from tobacco firms twenty years ago.

For these reasons, we ask that MSI reject Shell’s sponsorship of the Electricity exhibition and put pressure on the Science Museum Group as a whole to end their relationship with all fossil fuel companies.

We have previously written privately in the hope that we could avert any proposed deal before it was made public. Sadly, you have chosen to press on with this and though we regret having to engage in a public campaign on this issue, we will now make our case loudly and persistently.

A petition called ‘Shell Out! No place for big oil in public science’ can be accessed by clicking here