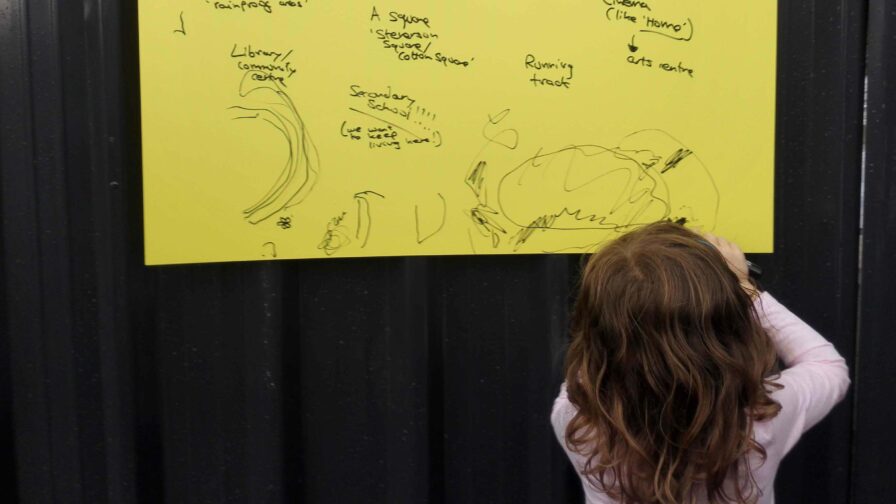 A protest was held on Thursday by the Northern Quarter residents and cycling campaigners who contend both schemes are inconsistent with the council’s recent declaration of a climate emergency. They argue the car park will attract more cars to the area, while the Great Ancoats Street scheme maintains five lanes of traffic within an area where air pollution levels are already “lethal and illegal”.

Despite the torrential downpour on Thursday evening, a group of concerned citizens met at Stevenson Square at 6.30pm to walk and cycle over to Central Retail Park for a general meeting about the car park proposal.

Carrying a large TfGM clean air banner adapted to read ‘Richard Leese show you care about clean air’ and a megaphone sounding a siren alarm, the group took over the road, holding up traffic on Great Ancoats Street.

“We want to be able to show that the two quarters, the Northern Quarter and Ancoats, are connected for humans, not for vehicles.”

Protesters split into six groups to brainstorm ideas for how they would like the space to be used, drawing and writing their ideas on yellow posters taped onto the hoarding that cordons off the main site.

Ideas generated included a park, extending the New Islington marina, allotments, a playpark, a cafe, a cycle repair shop, picnic area, benches, plenty of trees, social housing, a skate park, and sports facilities. The ideas will be shared with the council who are holding a consultation on the proposal, which closes on 6 August.

The council bought the 10.5 acre retail park in 2017 with the long-term intention of transforming it into space for offices as part of the Eastlands Regeneration Framework. The car park is an interim solution, with the planning application submitted on 10 July saying: “The current proposals are to provide a revenue-generating ‘meanwhile’ use for the site pending its future redevelopment.”

In his blog, Sir Richard Leese wrote: “We want to move parking closer to the IRR [inner ring road] to reduce the amount of unnecessary traffic penetration into the core of the city. Although it’s only intended for the short term, the proposal to use Central Retail Park as a car park is wholly consistent with this, it’s already laid out as a car park, and it will save council tax payers money.”

However, active travel campaigner, Nick Hubble, believes the car park will encourage more traffic into the city. “The council claim the Great Ancoats Street Improvement Scheme will keep traffic neutral, but that’s not true if they’re going to put a car park on it. The council are saying, ‘Let’s bring cars in and charge them for the privilege.’ That’s not what you do in a climate emergency.”

Hubble is also concerned about the lack of green space in the city, arguing ‘We’re getting all these high rise buildings and there’s no thought about where those people will go for leisure, exercise, fresh air, picnics. There isn’t an equivalent amount of public space to cater for the huge influx of residents.’

In his blog, Sir Richard Leese also acknowledged the increasing number of people living in the area, but maintains Great Ancoats Street ‘is still a crucial part of diverting traffic from the city centre.’

The plans, announced at the end of May, were met with backlash due to the removal of cycle lanes and resulted in a protest covered by BBC and ITV news crews.

Members of the scrutiny committee argued that sending 4,000 leaflets and holding one drop-in session wasn’t enough and called for renewed consultation.

Executive for Environment, Planning and Transport, Councillor Angeliki Stogia, however, rejected the recommendation. In an email sent to concerned citizens who had written to her about the scheme, she said: “A further consultation, when we do not have the option to change the scheme would undermine future consultations.” At the scrutiny committee, it was claimed the project must be completed by March 2021 or the central government funding would dry up.

In the same email, Councillor Stogia also said two parallel cycle lanes will be built to accommodate cyclists and keep them off the busy main road. At the scrutiny committee, former councillor Chris Paul argued it was ‘perverse’ to send cyclists down an indirect route when they want to get from A to B.

Yesterday’s protest may be an indication of future action to come. Hubble says, “There’s a pattern of the council doing what it wants with minimal public consultation or input. A lot of what seems to be happening now is campaign groups joining forces. The council is under more public scrutiny, and it’s good for the people of Manchester that we’re holding them to account.”