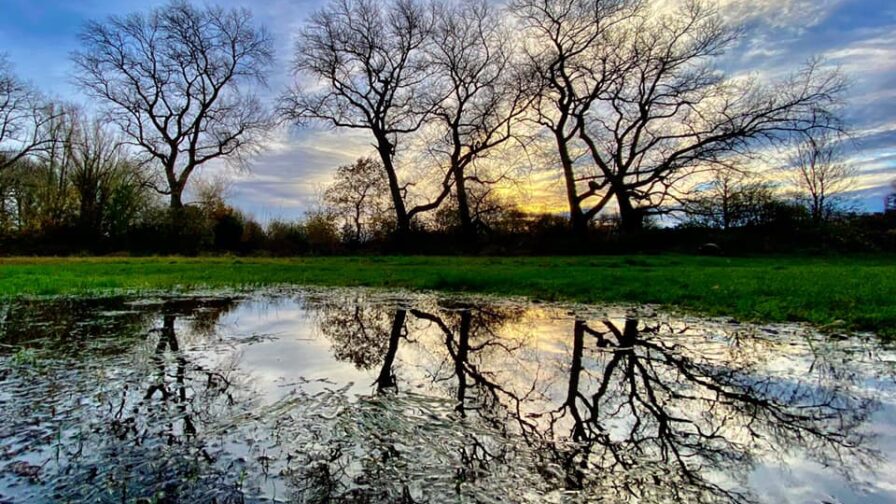 Campaigners can’t get a clear answer from Trafford Council and Manchester Metropolitan University about which side of the border these trees lie. They fear the trees could be felled to accommodate a controversial proposed development on Ryebank Fields. Andrea Sandor discovers the location of the boundary is indeed under discussion.

I recently visited the border of Longford Park and Ryebank Fields to see the female trees that lie along it. In the summer their expansive branches are covered with fluffy, white cotton-like tufts, the result of female catkins pollinated by wind-blown pollen. As autumn approaches the tufts fall to the ground. “It’s incredible,” Tara Parry, a local resident and activist tells me, “I’ve never seen anything like it. It’s like fur,” she says swooping her hands as though picking up an armful of snow.

It’s late in the year, and the tree’s cotton-like seeds and leaves have long fallen. Now you can clearly see the trees’ intricate branch structure delineated against the blue grey sky. Impossible to miss, these large handsome trees demarcate the boundary between Longford Park in Trafford and Ryebank Fields in Manchester. They were likely planted by the Rylands, one of Manchester’s great philanthropic families, around 130 years ago when the land was part of their estate.

Winter may seem like a strange time to visit female trees, which are distinguishable during summer when they are in bloom. But they have come under the spotlight in recent months as disquiet has grown around the boundary, the exact position of which could impact whether the trees live on or are cut down to accommodate a controversial planning proposal.

Recently the Friends of Ryebank Fields (FoRF) and Friends of Longford Park (FoLP) raised £748 in four days from the local community to have the trees DNA tested to learn whether the trees are Black Poplars, which are rare, or hybrids, which are more common.

“We had to tell people to stop donating because we had enough. People really care about this,” Tara, who is a member of FoRF, tells me.

For some time, the Friends groups have been trying to get clarity about where the boundary between Longford Park and Ryebank Fields is, and which side of the boundary the trees are on. This matters to them because Ryebank Fields, which is owned by Manchester Metropolitan University (MMU), is slated for housing development. This is a bitterly contested scheme and subject of a long unfolding saga, the latest chapter of which includes unearthed asbestos.

The University’s development framework recognises the importance of trees but categorises the boundary trees as “B” trees, rather than “A” trees of “high quality”. Across the boundary, Longford Park is a conservation area, which means the trees should have more protection if recognised as residing on that side of the border.

On the face of it, this should be a non-issue because multiple maps show the line of trees to the west of the boundary and in what is today Longford Park. One such map from 1890 is included in MMU’s development framework for the site, which clearly shows a line of boundary trees outside the area to be developed. Similar maps are used in Trafford’s 2016 Conservation Area document. MCC’s 2019 Strategic Housing Land Availability Assessment (SHLAA) map also shows the boundary trees on Trafford’s side of the border. The Friends groups even found a metal detectorist to trace old railings that used to enclose the boundary trees to the west of the border, which again suggests the trees lie in Longford Park.

For the past few years, however, the Friends of Longford Park have had concerns about the boundary and the future of the trees on it – and they say their concerns have never been clearly answered.

In December 2017, the group submitted a formal response to the consultation run by Manchester City Council about Ryebank Fields, expressing need for agreement on the exact line of the boundary. While they preferred that Ryebank Fields not be developed, their focus at the time was ensuring safeguards were in place so that the boundary trees and other border vegetation in Longford Park were protected. Richard Bond, Chairman of FoLP, says his group and Trafford Council both requested MCC ensure FoLP were consulted in the future.

The issue of the boundary seems to have been dormant until early this year when FoLP were alerted by the Friends of Ryebank Fields that MMU contractors had been working in the boundary area and had broken into a culvert, works that had also involved removing some vegetation.

Having not been consulted, FoLP asked MMU if they had prior permission from Trafford to carry out the works and pointed out that the fenced off culvert area was on Trafford’s land. The group also submitted a new formal response, now objecting to the development of Ryebank Fields since its status as greenfield was clarified, which also raised the significance of the pre-Norman conquest Nico ditch. Their response once again raised concerns about the boundary:

The responses I’ve received from MMU and Trafford give them plenty of wriggle room as to which side of the border the trees are on. I approached MMU for a comment, explaining there were concerns about the location of the boundary, specifically in regard to the boundary trees. A spokesperson responded, “We are not aware of any such concerns. The boundary of the site is clearly set out in the official title plan registered at HM Land Registry.” But not only must they have been aware of the concerns – the Meteor has seen several emails raising the issue – the HM Land Registry doesn’t show vegetation and therefore doesn’t indicate which side the trees are on.

Meanwhile, a spokesperson for Trafford Council said: “A line of trees were originally planted along the boundary line between Longford Park and Ryebank Fields and over time these have self-seeded. However, the trees are still visible. There are no plans for the boundary to be moved at this current time or in the future.” The spokesperson didn’t confirm the current location of the boundary.

I also approached Manchester City Council, who said any questions about the boundary should be posed to MMU, the landowner. They acknowledged the “boundary could become an issue once a planning application has been submitted and if it does indeed infringe on Trafford land.” In this case, the expectation would be that a formal comment would be made on the application.

Apart from their lack of clarity, what strikes me about MMU and Trafford’s responses in particular is how detached they are. According to MMU, the boundary is a line on a map that shows no vegetation, while for Trafford the enormous trees with sweeping branches are merely described as “still visible”.

The Friends groups concerns for the trees seem to be well justified. Discussions about the boundary are indeed taking place, and there are reasons why the trees might complicate the successful development of Ryebank Fields into a housing estate. They will cast shade on homes, obstruct views of Longford Park, and could make developing the site more challenging because their root structure will wind far into the field. It’s easy to imagine how some would feel the trees should be sacrificed on the great march towards “progress”.

But by all accounts these trees should never have been threatened. Ryebank Fields is land that was owned by Manchester City Council and bequeathed to MMU in the 1970’s to be used as sports fields and community amenity. Now it’s being sold to the private sector and disappearing from the commons. Perhaps this partly explains the strength of feeling for these trees, which are referred to fondly as “Enriqueta’s trees”, as members of FoLP and FoRB suspect John Ryland’s wife planted the trees after her husband’s death. The trees represent a connection to a disappearing past, and a time when land and amenities were more likely to be given to the community rather than taken from them.

But today, in the midst of a climate emergency, MMU sells land meant for the community to private developers, threatening the 1400 trees and eradicating the biodiversity on Ryebank Fields with its Aspen grove and hedgehogs. Now the boundary trees, great landmarks that are viewed affectionately by local’s and contribute to the character of the place, are threatened too. It may all be a step too far.

Feature image and all boundary tree images by Jay Clarke