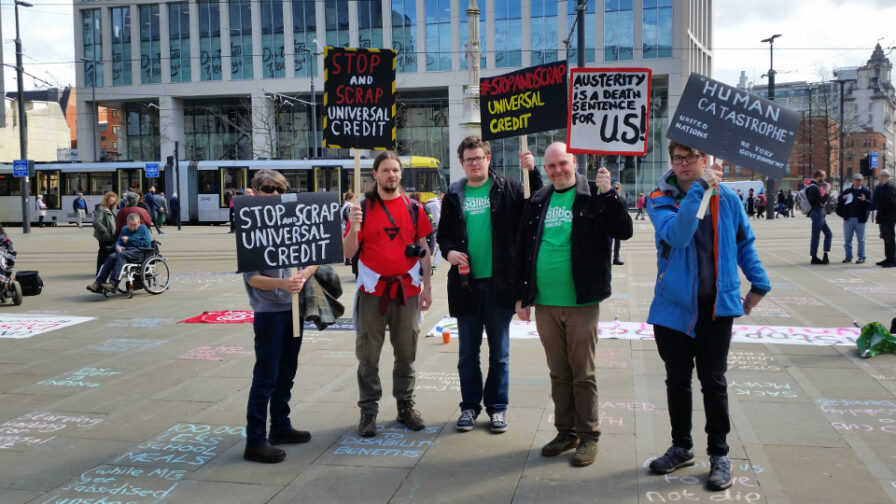 Members of four community campaign groups from Manchester joined forces yesterday to take part in a national day of action against Universal Credit. The paving stones of St Peter’s Square were covered with chalked slogans denouncing the controversial social security payment system, and a letter was presented to Manchester Town Hall demanding an end to tenant evictions caused by lengthy waiting periods for Universal Credit payments.

Manchester Disabled People Against Cuts (DPAC) were one of many DPAC groups around the country taking part in the #StopAndScrap  Universal Credit campaign (previously reported on here) which demands that the controversy-stricken social security system should be consigned to the dust bin and legacy benefits reinstated. Joining them on the day of action were Greater Manchester Housing Action (GMHA), Greater Manchester Law Centre (GMLC) and Acorn Manchester (renters’ union & anti-poverty organisers). All four organisations collaborated on the joint letter to Manchester City Council requesting that “under no circumstances will you allow an eviction order to be enacted towards a resident of Manchester purely as a result of waiting for the first payment of Universal Credit or subsequent processing delays which may occur”. 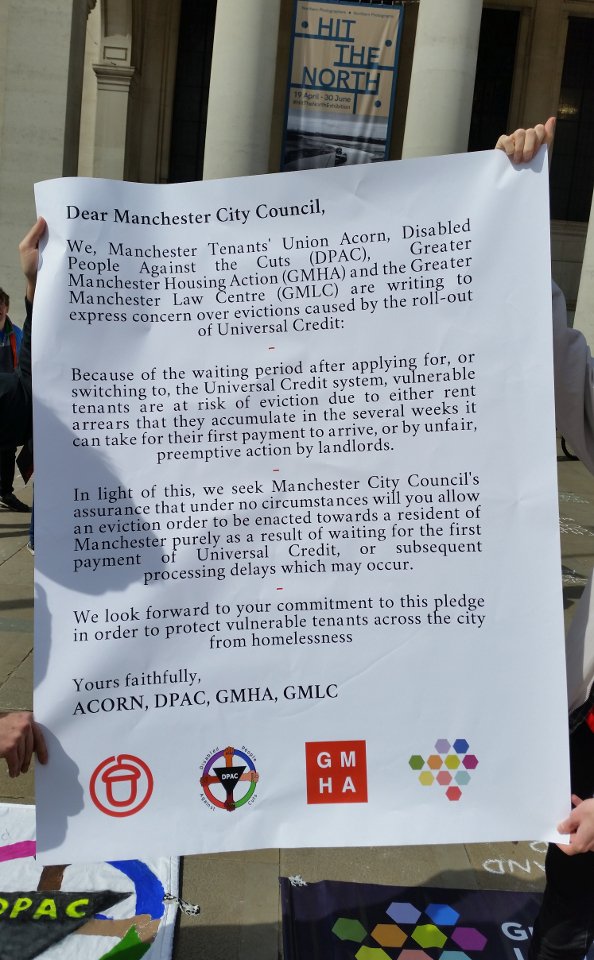 Universal Credit (UC) can cause major housing issues for claimants for a number of reasons. Housing Benefit is one of the six legacy social security payments that UC replaces, and there is a minimum 35 day wait to receive the first payment, but some claimants have reportedly waited 60 days before payment. Eighty percent of social housing tenants moved onto UC have fallen into rent arrears or increased pre-existing arrear levels. The monthly payments of UC, containing the Housing Benefit element, are mainly paid directly to the claimant rather than the landlord, increasing the risk that rent money will be used to pay other debts. The Landlord Association has reported a huge rise in non-payment of rent in areas where UC has been introduced, resulting in many private landlords being unwilling to rent to UC claimants. Charity Homeless Link have also released a report showing a link between rising youth homelessness and UC.

Rick Burgess of Manchester DPAC thinks that tenants should not be suffering due to the multiple failings of UC, saying:

“It is not the fault of tenants that they can’t pay the rent. Because Universal Credit has these massive delays the computer system is always breaking down. So there should be no evictions because of this system which is frankly rubbish.”

Greater Manchester Housing Action have been warning about the dangers of UC increasing homelessness for some time, their representative on the day Debbie Blanshard said:

“Universal Credit is a flawed and brutal system. It’s leading to a huge increase in homelessness… We are calling for this flawed system to be scrapped. It is as unjust as the poll tax and should go the same way. Homelessness will only increase if it continues.”

Despite a pledge by government ministers that no one with a disability would be worse off financially under UC, some disabled people are seeing cuts to their payments. A terminally ill 52-year old man found himself £178 a month worse off after being moved on to UC; fortunately he has managed to launch a legal challenge against the introduction. But cuts to legal aid mean that many disabled people are unable to challenge wrong decisions made by the Department of Work and Pensions, such as incorrectly applied sanctions which can see their payments stopped for a minimum of 1 week and up to a maximum of 6 years. Official figures show a 99% drop in legal aid awards to disabled people in dispute with the DWP over social security payments, which is particularly troubling since disabled people are 53% more likely to have their payments sanctioned than claimants who are not disabled. The move to Universal Credit has also introduced a complex and time consuming application process, that people with disabilities can struggle with.

John Nicholson, chair of GMLC, was particularly concerned about the effects of legal aid cuts, saying:

“…the cuts in legal aid have been extensive… we want the restoration of legal aid, we want a properly funded legal aid system so that everybody who is in need , whether that is a tenant, and employee a disabled person or someone on benefits, everybody has access to legal advice. These [social security claimant] regulations are really complicated, they are getting more complicated. You cannot as an ordinary person, not even as a lawyer – I am a lawyer- you cannot read these regulations and make sense of them. The very least you need as a possibly vulnerable person, a disabled person, is some assistance, some legal advice, some legal representation to help..” 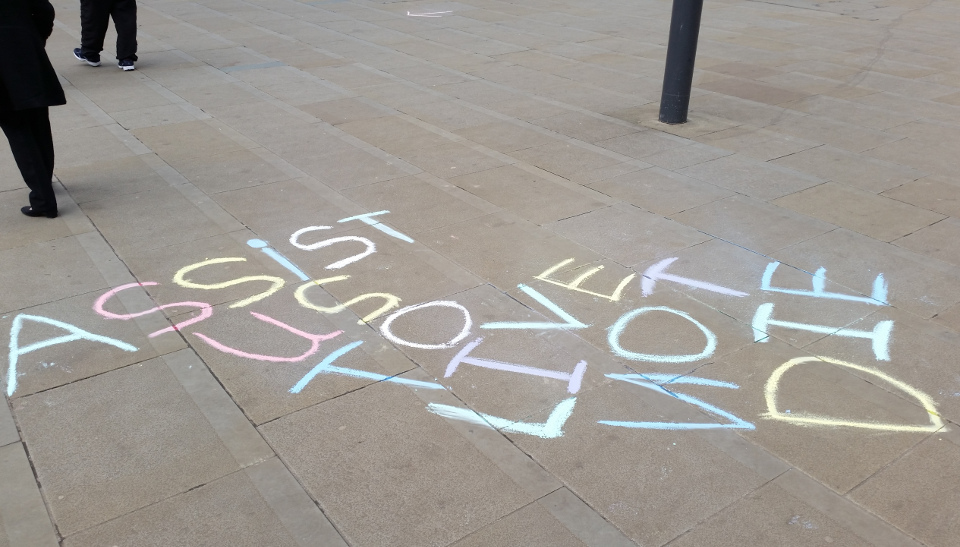 Nicholson thinks that the ‘hostile environment’ devised by the Home Office to deter immigration, which has led to the recent scandal of the abuse of UK citizens who migrated from the Caribbean in the 40’s and 50’s, has unpleasant parallels with the current social security claimant environment. The architect of this hostile environment, Prime Minister Theresa May, recently apologised for the anxiety caused by threatening these citizens with deportation unless they could provide often unobtainable evidence of their arrival in the country. Nicholson says:

“In my view the two categories in this country who have been most demonised are migrants who have been called bogus, and benefit claimants who are called cheats and scroungers… The way in which they are treated legally is very similar. The hostility – and they are so unashamed the government – they call it a ‘hostile environment’, we want ‘a hostile environment’. Nobody in their right mind wants that… it is a very similar arrangement that is taking place here for people who are seeking migration and people who are seeking social security, just the ability to live and survive. It’s a very similar treatment that is being put to both of those categories of people, and it is wrong.”

“…found by the United Nations to have committed grave and systemic human rights abuses that have caused a human catastrophe for disabled people. The UN gave them 11 recommendations to alleviate this abuse; they have refused to do that. So I would say to her [Esther Mcvey, Secretary of State for Work and Pensions], implement those 11 recommendations, otherwise you are in the same class of national government as any other, whether it is Assad’s or Trump’s government, that abuse their own citizens and have been judged to be doing that by the UN…