Is Burnham’s A Bed Every Night scheme enough? 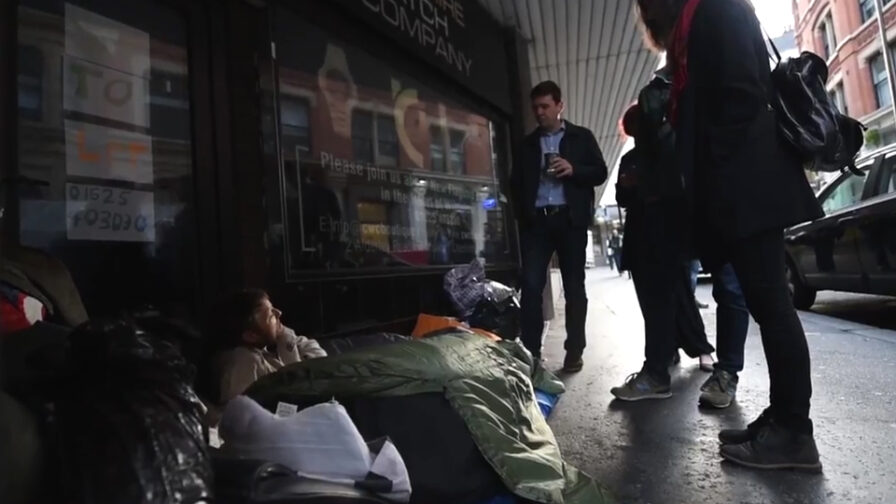 On the first day in his role as mayor of the Greater Manchester Combined Authority, Andy Burnham pledged 15% of his £110,00 salary (£16,500) to his newly created Mayor’s homelessness fund. He had soared to victory in the election with 63% of the vote on the back of a pledge to end rough sleeping in Greater Manchester by 2020.

During the so-called ‘Beast from the East’ cold wave last winter, the Greater Manchester Combined Authority (GMCA) arranged for beds to be provided for rough sleepers across the region every time temperatures were forecast to fall to freezing or below. Whilst in accommodation, individuals were able to access support for other issues such as mental health and alcohol problems.

The scheme was considered such a success that this winter, it has been expanded to stretch across every single night from the beginning of November until the end of March, under the name of A Bed Every Night. Burnham has allocated all the money from The Mayor’s Homelessness Fund – a fund set up when Burnham took office to provide financial support for projects that work towards ending rough sleeping – to the scheme until its end.

£183,602 has been pledged to the fund’s GoFundMe page since May 2017. Highlighting the success of A Bed Every Night so far, the GMCA website states that over 400 people have been helped off the streets in Greater Manchester by the scheme since November. This includes 172 people taken off the streets on one night alone on Monday 19 November.

These figures are impressive. They make for great soundbites on breakfast news shows and for concise, consumable graphics on the mayor’s Twitter timeline, but is the scheme enough?

The scale of the problem

With the real number of rough sleepers difficult to know, the claim to be able to provide a bed for every night, as the title of the scheme suggests, becomes a dubious one. GMCA stated on their website this month that “officials believe A Bed Every Night….now has enough beds in every borough for every person who has been living outdoors.” This would mean a vast increase in available accommodation for rough sleepers on previous months in each of the 10 Greater Manchester boroughs, particularly Manchester City Council, which only had 51 beds available for rough sleepers last month, just over half the number Manchester’s of rough sleepers (which we know is likely an underestimate).

Manchester has since increased the number of available beds to 103, but some still doubt whether they will be able to provide shelter for everyone who needs it. GMCA have not specified exactly how many beds they estimate will be needed this winter, and how many they currently have available, and were unavailable for comment when The Meteor contacted them.

A Bed Every Night …for everybody?

As well as expressing doubts about whether Greater Manchester has enough beds for everyone sleeping rough this winter, some believe that simply providing accommodation isn’t adequate, such as Liberal Democrat Councillor John Leech. He said: ‘I think there is a challenge in so far as there are some hard to reach people. Even if you offer them accommodation, they won’t necessarily want to take it up for whatever reasons.”

Siobhan Donnachie, from campaign group Greater Manchester Housing Action, said that whilst the scheme had certainly helped alleviate the problem of rough sleeping, its name was misleading. She said: “It’s obviously not going to get everyone off the streets and end rough sleeping. I think the message that there’s a bed for everyone every night is a bit misleading, but it has definitely started to alleviate things quite significantly, so I think it is a good use of funds.”

She also voiced concerns that the scheme failed to address the changing demographics of the rough sleeping population on the streets of Manchester. She said: “I don’t know how much the scheme is providing for women and young people specifically. If you look on the streets of Manchester there’s an increasing lot of young people who are homeless. Sometimes they get ignored along with women.

The scheme also appears to exclude those whose last registered address isn’t within Greater Manchester. In a blog post announcing the launch of the scheme in September, Burnham writes, “A Bed Every Night has to be aimed at people who are from Greater Manchester so we will be supporting people whose last address was in the city region.” He says this is to address fears that the scheme will cause Greater Manchester to become a “magnet” for homeless people from elsewhere to come to the region, a fear for which Burnham also states there is “no actual evidence.”

Beyond the issue of excluding a sizeable amount of the homeless population, there are also inconsistencies in the publicising of the scheme. On 24 November, the Greater Manchester Combined Authority released an infographic on their Twitter feed under the title ‘A Bed Every Night,’ with a phone number to ring to report a person seen sleeping rough in nine of the ten boroughs of Greater Manchester.

The only borough for which there wasn’t a phone number was Manchester, the district with by far the highest rate of rough sleeping in the city region. An email address was provided instead. When GMCA were contacted and asked if a number existed to report rough sleepers in Manchester, they said to contact 0161 234 4343. The number is the switchboard of Manchester City Council. They incidentally were able to easily provide a phone number to call for homelessness services in Manchester. The reason why that number isn’t on the infographic remains to be known. 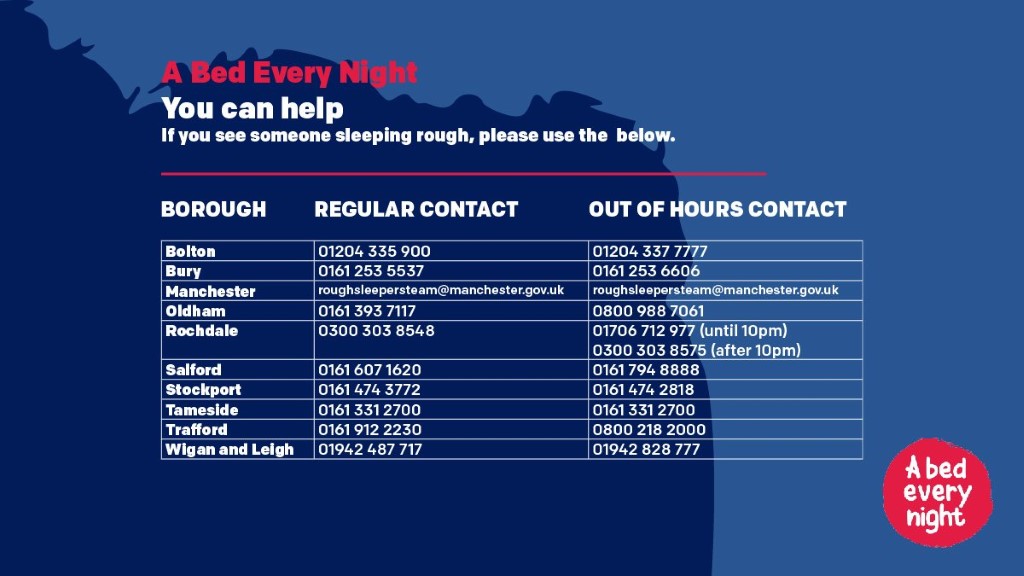 Beyond A Bed Every Night

Regardless of A Bed Every Night ’s other shortcomings, it is also only temporary, finishing at the end of March. What solutions exist beyond the scheme?

Siobhan Donnachie accepted that the impetus for real change lies with national legislation. However, she welcomed Salford Council’s plans to build over a hundred new council houses. She added: “It’s not just about increasing the supply of housing, it’s about increasing the right supply of housing to cater for people’s needs. I think they should be working to build more housing. Not even social housing, but community-led housing, co-operatives, community land trusts.”

Meanwhile, John Leech said in the short term he’d like the council to reassess how it defines individuals as vulnerable, therefore obliged to be given accommodation. He said: “I’ve heard anecdotal evidence of people who’ve presented themselves as homeless, people who haven’t been classed as vulnerable who could have then quite easily ended up on the streets.

“I think local authorities need to have a rethink about how they assess somebody as vulnerable or not vulnerable because that will stop some people from ending up on the streets.”

“Where it has had available land, it has not used that available land for affordable homes. In many circumstances, it has sold it off to the highest bidder.”

Other schemes taking on homelessness in Greater Manchester

In addition to A Bed Every Night, GMCA says that 222 rough sleepers have found accommodation through the Social Impact Bond. The SIB is a £1.8 million government-backed bond, using money from the private sector to help regular rough sleepers off the streets.

The scheme aims to help people maintain a tenancy in one of 270 homes made available by 15 Greater Manchester housing providers and two private rented sector partners. Furthermore, in May 2018, the government announced £8 million of funding for a Greater Manchester Housing First scheme. The scheme puts the emphasis on finding people a house first, rather than making engagement with services a precondition for housing.

A Bed Every Night is the perfect marketing slogan for a mayor who needs to show he’s taking his pledge to end rough sleeping by 2020 seriously as he reaches the halfway point in both this mission and his term as mayor. And it’s undoubtedly alleviating the worst realities of homelessness: sleeping outside on the streets in winter. However, in its simplicity, its ‘does what it says on the tin’ matter-of-factness, it seems at risk of obscuring the gap in provision – what is being missed. Whether that’s efforts to address the particular needs of the rising number of women and young people sleeping rough, or the lack of council and social housing embedded at the heart of the issue.

The latest estimates show that there are 6409 people homeless in Greater Manchester. A few hundred or so temporary beds for rough sleepers is a start, but it’s hardly a safe bed for everyone, every night, in a place they can call home.