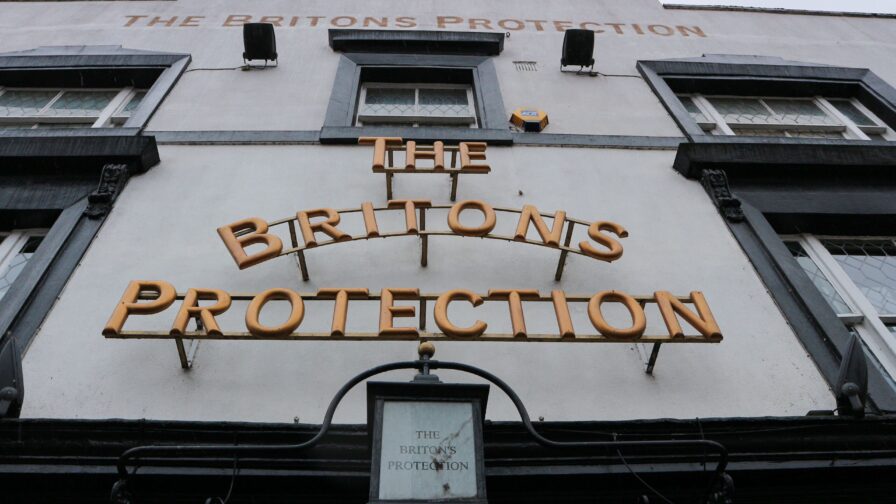 The 200 year-old much loved Manchester pub built close to the site of the infamous Peterloo Massacre faces a double-jeopardy threat to its future as Heineken brewery refuses to renew its owner's license, and a controversial 26 storey skyscraper towering over the pub threatens to blot out the sky for pubgoers.

Nestled behind the Bridgewater Hall, and with the Manchester Central exhibition centre viewable by the smokers gathered at its doorway, the Britons Protection is facing a pincer movement of challenges which threaten its future as a much loved and historic drinking establishment in the city.

The current management of the pub have launched a crowdfunding appeal to pay for a legal fight against a subsidiary of brewing giant Heineken which wants to take the management back in-house. And the Peterloo Memorial Campaign are opposing the development of the 26-storey Apex Tower and are calling on people to comment on the plans before the council, before the online consultation ends on 17 April.

The Britons Protection, built in 1806, has become a staple attraction for pub crawlers, ale lovers and tourists wanting to visit an authentic British pub. It is also well known for its expansive collection of whiskies and a rotating selection of cask ales from local and regional brewers.

Allan Hudd, who has been its landlord for over 10 years, was served a notice by management company Star Pubs and Bars stating that his current lease arrangement will not be renewed, with the firm wanting to run the Britons in-house.

Star Pubs & Bars was fined £2 million in 2020 by the pub code adjudicator for “seriously and repeatedly” breaching laws protecting pub owning companies and their tenants, by forcing many to sell “unreasonable amounts” of Heineken’s beers and ciders.

The team in charge of the Britons fear the move could end many of the features drinkers most enjoy about the legendary boozer. Over 8,000 people have signed a petition and a crowdfunding appeal has been launched to help the lease-owners go to court and fight the decision.

Star Pubs & Bars owns the building, but Allan and its team had negotiated a “free-trade tie” agreement which gave them a free hand in choosing what drinks they stocked.

The result has been a growing library of whiskies from obscure Welsh, Japanese and Scottish single malts to corn and rye bourbons. Its revolving selection of cask ales has also earned a strong reputation among real ale fans visiting the pub. Allan argues:

“People come here because of our drinks, local cask ales, specialist whiskeys. Heineken haven’t got the portfolio of their own brands to match what we do.”

“If my Heineken tap stopped working tomorrow, my customers could drink Moretti or Stella. Because with all due respect a lager is a lager. But if I took out all the whiskies tomorrow, a good chunk of my clients wouldn’t be here because that’s what they come for.

”The local cask ales we have here and the 300-odd whiskies we’ve had on the back bar. That’s why people come to this pub. If you took that away, which Heineken would have to do, they wouldn’t be setting up accounts and credit with the range of whisky and spirit companies like I have.”

“To them the Britons is just one item in their 150-pub portfolio, they aren’t going to make exceptions for what we do here. For me it just doesn’t add up if you take away what this pub is all about and what people come here for, how can it fit into any business model.”

The second threat to the pub’s future is the plan to develop the small plot of land at the side of the pub. The Apex Tower is a proposal for a 26-storey block containing 72 luxury apartments, by London-based firm Arrowsmith Investments, announced last November to wide denunciation from the pub’s owners and the Campaign for Real Ale.

The development, which includes a smaller tower on a tiny plot in between the pub and the nearby Jury’s Inn Hotel, contains no affordable housing. A viability assessment seen by The Meteor revealed that flats will be priced at upwards of £392,500 and the developer estimates upwards of £4 million in profit from the development, if it goes ahead. Hudd is vehemently against the tower:

“It will sandwich my pub between two buildings. After that’s been built, you’re not going to see this little pub anymore, you’re going to see this massive tower. And it’s all metal, glass, too modern. It doesn’t fit with the type of building this is. You’ll have taken this key bit of Manchester heritage and destroyed it by building all these glass towers around it.”

The Britons Protection is built close to the site of Peterloo Massacre in 1819, a formational event in the fight for democracy in Britain, and the pub features large murals in its corridors depicting the events.

The pub’s direct connection to the city’s past and the towers’ proximity to the nearby memorial commemorating the massacre has attracted further criticism from the Peterloo Memorial Campaign.

“Whether you support or oppose the continued creation of skyscraper accommodation in the city, this incongruous, visually jarring structure is a tower too far,” said Paul Fitzgerald, founder and chair of the Peterloo Memorial Campaign. “We could easily lose the entire pub, just like we did with another valued building, the bulldozed Tommy Ducks pub.”

“We’ve all seen abandoned, rotting vintage buildings dotted around the city. We can’t let that happen to this hugely significant landmark that’s so linked to the history of Peterloo. We call on the people of Manchester and all the councillors voting on this planning application to Protect The Protection and say a clear no to this act of developer hubris.”

Allan and the campaign are urging everyone concerned about the Apex Tower development to register their comments on the application on the formal planning application online consultation, before the consultation ends on 17 April.