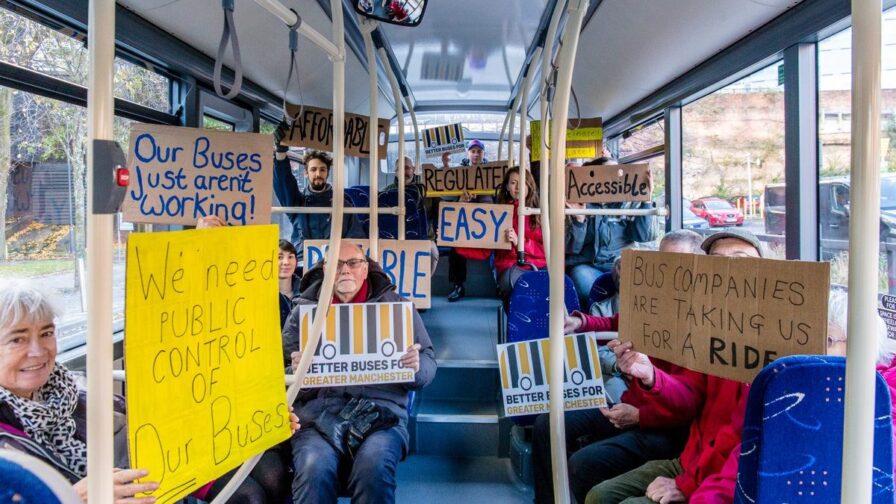 A bus surrounded by people with protest placards asking for more “affordable”, “reliable” and “accessible” buses was parked on Store Street in Manchester last Thursday, before transporting the campaigners to the city centre for tea and cake at the Greenfish Centre. The bus ride was organised by the Better Buses for Greater Manchester, a campaign backed and set up by national organisation We Own It.  The bus was supplied by a not-for-profit bus operator that provides accessible transport solutions for local communities.

At a time when uttering the word nationalisation would draw accusations of being a Stalinist, Cat Hobbs founded We Own it in 2013 and has campaigned for public services to be brought back into public hands following the privatisation and deregulation caused by Margaret Thatcher first, which was then allowed to persist and proliferate through Tony Blair’s premiership. The wind has since shifted, more and more people are now in favour of the return to public ownership of Royal Mail, the railway, the outsourced sectors of the NHS, prisons, care work, water, and education. In a country where a 2-hour train trip to London can cost anywhere from £27 to more than £300 and commuter trains are crammed with irate passengers running late, public transport is becoming a hot topic of political debate.

Only a few months ago, the Conservative government brought back into government control for the third time the East Coast Main Line, ending the failing Virgin and Stagecoach franchise. Shadow Chancellor John McDonnell responded that he welcomed the move, and joked that the Transport Secretary Chris Grayling had “nationalised more railways than any Labour Minister”.

Unlike Transport for London’s (TfL) integrated system under local government control, Manchester’s transport system is fragmented and headless. At least 40 different bus companies serve the Greater Manchester area, and ‘because it’s a deregulated market, no single organisation is responsible for planning the bus network or setting fares’, states the Transport for Greater Manchester (TFGM) website. This means that passengers are forced to buy different tickets and passes for each journey if they need to change bus, unless they buy the expensive System One/Get Me There passes which can reach £36.60 a week to travel on all buses and trams, but not on trains. You can have a bus + train (and only some tram routes) monthly pass for £118, or a bus + tram for £120/month, but not one for all three, apparently.

The simplicity of the Oyster card and the TfL seamless system started by former Labour London Mayor Ken Livingstone is more efficient and understandable compared to the current system in GM, and it provides a possible model for Greater Manchester to follow

So far, not much has changed in this respect, despite the Mayor’s good will, and the Get Me There card which was supposed to be the Manchester Oyster card, but it is of limited use as it is easier to buy digital tickets and passes on the app that goes by the same name.

Some say it’s complicated to reorganise our transport system, and a backward step to introduce more regulation. But is it really? In several European countries, public ownership of bus services is the norm, and so are public and private partnerships, with councils having a majority share and, therefore, the final say in decisions. Some German cities are currently trialling schemes to make all public transport free to take on air pollution. Public welfare, clean air and a healthy population seem to be a minor concern for many British politicians, when compared to innovations in Europe to improve these issues.

The Better Buses for GM campaign has gathered data about the major bus companies in Greater Manchester, and they have discovered information showing eight-figure dividends for their shareholders, while services fail passengers. The petition in support of the campaign can be accessed online from today.

Better Buses is not currently campaigning for the nationalisation of bus services; it is campaigning for re-regulation of bus networks and franchising, which TFGM says is “a procurement method that sees the transport authority specifying the service requirements in a series of contracts, with bus operators competing for each contract to provide the services.”

This is the system used in London and in Europe and TFGM claim it is “an efficient competitive mechanism that brings together the best of the public and private sectors”. Currently, there is no control over commercial bus services in GM. Transport for GM only subsidises directly the unprofitable routes that private companies are not willing to operate, that is about 20% of the routes in Greater Manchester, while companies cherry-pick the profitable routes and keep all the profits.

“So many of us don’t know that the bus service isn’t run by TFGM. We all assume that those at TFGM have the power to change that, but the truth is that bus companies are literally in the driving seat and choose what routes to run and what fares to charge…TFGM are at the mercy of bus companies, because it’s companies who ultimately set the prices to run unprofitable routes.”

Says Robinson, who also believes bus companies will not cheer at the prospect of being regulated and of downsizing their dividends, following the example of bus companies opposing re-regulation in Tyne and Wear, Robinson continues. “When a re-regulation proposal was put together there, the bus companies launched a legal challenge and overturned that decision, saying that it was not in the public interest to be regulated… In London their profit margins are around 8%, while in Tyne and Wear they reach 20%, and shareholders payouts are through the roof… Re-regulation would significantly reduce that, and that money could be used much more efficiently to fund less profitable routes, for example”.

Robinson expects private companies in Greater Manchester to start a similar propaganda campaign and to lobby TFGM against re-regulation: “That’s why, in Manchester, we are keen to build a very broad movement and get our petition signed by as many people as possible, but also campaign on the streets to show how important buses are for us. The vested interests will obviously be against us.”

A public consultation on franchising bus services is to be held soon based on a detailed TFGM proposal, but ultimately it is the Mayor of GM that has the power to make the final decision.

On the 22 November 2018 there will be a public meeting about the topic, location to be confirmed.