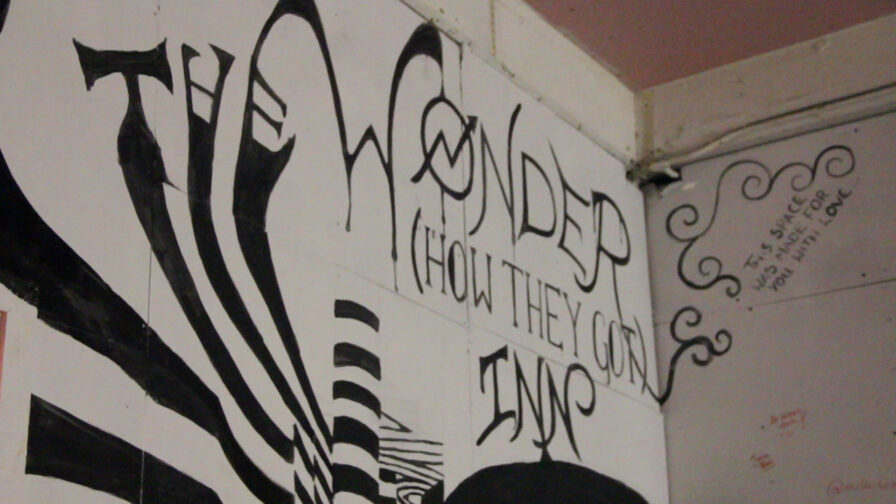 The idea that ownership breeds value is essentially true. However, it is not true in the Thatcherite sense, where ownership is the means to the end of an individualistic anti-society. It is true if you develop an area which’s express purpose is to be the collective property of those who inhabit it or utilise it, then you create a system of value and engagement you cannot achieve through a space engineered to profit from its visitors.

The examples of The Addy and The Wonder How They Got Inn (formerly The Wonder Inn)  highlight the increasing need for autonomous community spaces in a city which has suffered greatly from the degradation, defunding and closure of public services. Precisely because of this there is a need for community-owned spaces not under the auspices of local government or private ownership in the main because these institutions are transient. While the state is capable of good governance in providing a range of services for its people, the reality of the situation we find ourselves in currently demands a different, more active attitude.

In a nihilistic sense, the act of squatting a space is a futile one, especially in the UK, a country with little protection for squatters and an odd national belief in the inviolability of private property. Unlike Denmark, whose government has permitted the existence of Christiania, an autonomous collective community built on an abandoned military base, or Germany which despite a creeping government crackdown on squatted spaces, still has large squatting scenes in Hamburg and East Berlin.

The UK is a country which has progressively lost its collectivist traditions, labour unions have declined in density and power, community structures have been dismantled and public services are teetering after swathes of budget cuts. These are problems visible in any town or city in the country. While we can petition local progressive administrations to take action on the subject most of those inclined have their hands tied financially trying to maintain their services within ever-shrinking budgets. Manchester City Council’s overall budget has been reduced by more than 40% in real terms since 2010. This is not conducive to taking the radical action which is required to reduce the harm central Government is intent on meting out to anyone unlucky enough to not be rich.

Manchester City Council has no love for squatting, this is made clear by its somewhat disingenuous and active eviction program of squatters from occupied buildings across the city. The recent eviction of 17 homeless people from a squat on Princess Street, opposite Albert Square is an example of this response and also highlights a wider lack of effective action on this issue. MCC has stated it is doing all it can to remedy the homeless issue and provide shelter, as is their legal obligation during winter, and it has made welcome extensions to Rough Sleeper Outreach teams and Housing Options services, a programme to prevent homelessness. However, its final results too often consist of piecemeal bed provisions in local community centres. While these are all welcome measures, on its meagre budget, the council should also be focusing on immediate harm-reduction strategies, mainly getting rough sleepers off the street in whatever way possible.

This is where squatters have played an essential role in establishing shelters in unused buildings. These efforts deserve to be recognised but they also need support rather than prosecution. Activists and those who are homeless will continue to access buildings and shelter there, to establish new support networks and distribute donated food, clothing and medical supplies. It is up to MCC whether it wants to intervene and sabotage such efforts, or support them and extend shelter provision in a comprehensive way.

If it is a problem of safety, charities can be invited to provide financial and legal support or unoccupied public buildings can be leased temporarily to organisations to establish their legality. In fact, this is a necessary action to take because MCC spends the overwhelming majority of its Homelessness funding on temporary accommodation, costing almost £2 million last year. The city’s homeless budget is stretched thin so there needs to be more inventive provisions such as utilising unactivated public buildings with volunteer and charity support.

The homelessness situation is getting worse and it presents a stark choice to the council on the issue of squatting. Either they open up relevant empty buildings to serve as temporary shelters, or they continue as they are evicting people into the cold and rain who have done the rational thing in finding shelter of their own.

These places have to be recognised for their contribution to the city. Alongside providing shelter for those without, they are also important contributions to the cultural community of the city providing venues for music, art and political discourse. These groups are not simply surviving, they are also organising to fill some of the gaps left by austerity.

The government has cut funding for welfare programs and community centres which have torn the safety nets between secure housing and the street. Simultaneously, the longer project of privatising public spaces and indeed the city has manifested itself in the progressive monetisation of society at large. Programmes and services are judged on their ‘Value for Money’ while it is the intangible benefits provided by such places which are so often ignored.

Squatters have multiple motives for creating a community space and shelter to presenting a challenge to capitalism and the privatisation of public space, but in each instance each squat poses a question to local government and Manchester as a whole; do we want to help the homeless in an immediate, effective and life-saving way or are we content to leave them struggling for hostel spaces or braving the streets at night?

Frustratingly the causes of these problems, and indeed many of the methods with which to solve this issue are crafted far away behind the walls of Whitehall by the hands of an unsympathetic government who ignore opportunities for grassroots solutions. But from adversity comes innovation and local governments, though hamstrung by central administration, should empower and support their citizens’ efforts to solve these issues.

Squatting is not the only solution to the current crisis in homelessness or the continual loss of community space to privatisation and monetisation. it is true that these places will not solve the crises intrinsic in our society. Nevertheless, it is with a thousand small struggles that change is achieved, that minds are changed and causes are won.

Film by Alice Toomer – McAlpine and Mo Jo, with thanks to Lousy Badger Media