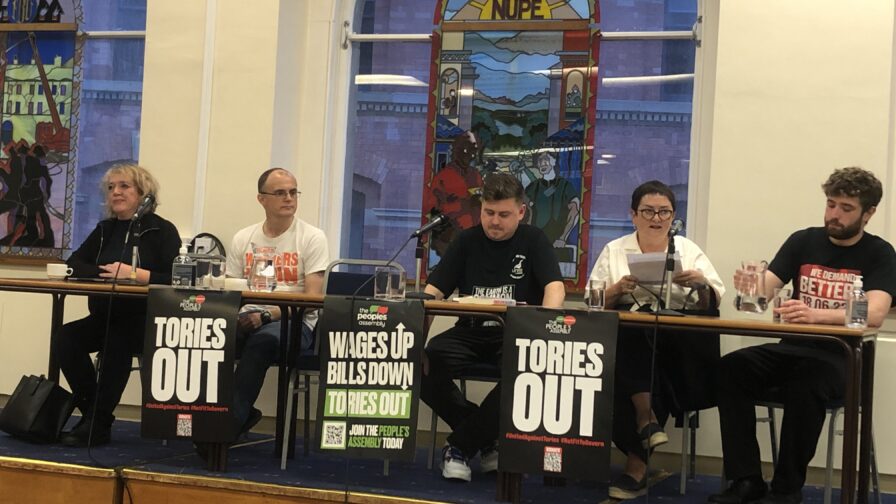 Trades Unions are working together with community groups to organise action against poor pay & conditions, and the cost-of-living crisis. I attended the first of many planned ‘town hall’ meetings in Greater Manchester designed to inform and prepare locals to fight back against a broken system.

The Mechanics’ Institute played host to the first of many ‘town hall’ meetings on worker solidarity and the cost-of-living crisis on 20 September; this one run jointly between the TUC and the People’s Assembly. There will be more announced over the coming months, as part of an ‘Autumn of Action’.

The idea is to bring people together, who might not know what they can do about their declining circumstances, to push back against the numerous social problems plaguing Britain under the Conservatives.

The initial meeting brought together speakers from campaign group the People’s Assembly and unions representing education, transport and civil service workers, as well as the Trades Union Congress and StrikeMapUK. All of these speakers had something to say that affects aspects of everyone’s lives. Whether you’re rich or poor, facing a pay cut or pay increase, you still rely on public service workers to keep the country running.

And they’re not happy. From teachers to nurses to barristers, railway workers and council officers, there is a crisis of pay and conditions in the public sector. And we haven’t even got on to the problems in the private sector.

So how bad is it?

The audience heard shocking testimony of just how far standards have fallen in this country. Although current industrial disputes centre on workers’ pay and conditions, there are direct and indirect consequences for all of us. Cuts to public services mean fewer staff to operate essential services and a paring down of the already-stretched services we still have left.

Mary Bowstead, joint general secretary of the National Education Union (NEU), spoke about the effects of government policy on the teaching profession, but also the whole economy: “We are entering a moment of social crisis in our country. Inflation and energy costs will immiserate many people this winter.

“Working people are suffering the longest and harshest squeeze on wages for more than 200 years, since the Napoleonic Wars. The average worker has cumulatively lost nearly £20,000 in real earnings, when you take into account inflation, between 2008 and 2021.”

Three panellists were from education unions, and they described the dire conditions and falling pay within teaching that is having a knock-on effect on the quality of our children’s education.

Lucy Burke, UCU Chair at Manchester Metropolitan University began: “University pay is now so poor that many universities can’t hire cleaning staff, they certainly can’t hire IT staff, because the wages are too low. There are such poor employment practices in universities that staff on hourly-paid and zero-hours contracts might find themselves teaching students in the morning, and pulling pints for them in the afternoon.

“You’ve got highly-trained, committed staff who cannot afford to put a roof over their heads or pay their bills. And we know that there are people in our union who are homeless, who’ve had to live in tents, because pay is so poor.”

She described the “disastrous consequences of turning education, which is a public good, into a business.” The marketised model of higher education stems from the introduction of tuition fees by the New Labour government, later ramped up to £9,000 per year by the coalition government of 2010-2015.

This allowed central government funding for universities to be cut, and any shortfall to be met by the universities. This often means cutting staff numbers and pay, and cramming as many ‘customers’ as possible into labs and lecture theatres.

Mary Bowstead elaborated further on the effects of government cuts on teachers and pupils: “Teachers have lost 20% in real terms since 2010. Support staff have lost 27%. Another huge real-terms cut, on top of those cuts, is simply unsustainable. Schools are underfunded and can’t afford their energy bills.”

“Our children’s education needs properly paid teachers, properly paid support staff and well-funded schools. We are seeing teacher flight in schools. 40% of the profession leave work as a teacher within 10 years, a third leave within five years. It used to be excessive workload that drove them from the profession. Now it’s the toxic combination of excessive workload and [low] pay.

Another teacher, Rachel Knight, NASUWT national executive member for Greater Manchester, continued in a similar vein. She graduated and started her career in the early 2000s, during the New Labour years, and before the austerity measures brought in by the Conservative-Lib Dem coalition government. She described a stark contrast between the years before and after the 2010 election.

“I was talking to a young teacher who’s gone into the profession at a later age to get a better wage to support his wife and his four children. And he said, with tears in his eyes, ‘I do not understand how I’m supposed to pay my £700 per month rent and feed my four children on £1700 a month’ – because that is basically what’s happened to teachers’ starting salaries.

Darren Ireland, from the rail workers’ union, RMT, told us that “We should be angry. We should be very, very angry. Because if you look at what’s happened over the last 12 years, our class, the working class, have been under consistent attack from the Conservative government and their hard right-wing policies.

“Our pay is dropping. If you work in the public sector, you’ll know that your pay’s dropped 20 – 25% in real terms over the last 12 years. You’ll know, if you’re an outsourced cleaner on little over £10 an hour, that when the energy bills went up you’ve lost two days’ pay to the corporate racket of these private energy companies.”

“What’s on the table at the moment means the closure of 948 booking offices across the country, and they’re using the terms ‘let’s get the booking office staff out from behind the glass’, they want a multi-skilled station role, a five-hour longer working week and lower rates of pay.

“They’re not even calling safety-critical guards ‘guards’ anymore, they actually want to reinvigorate driver-only operation across the whole of the industry, they want to cut maintenance scheduled tasks and Network Rail maintenance staff who keep the tracks and infrastructure safe by 50%.”

Fran Heathcote, president of the PCS union, which represents the UK’s government workers, told us that:

“Our members aren’t the overpaid bureaucrats [the media and government] try to portray them as. Many of them are just above the minimum wage. 40% of those processing Universal Credit are entitled to claim it. Many of them do three or four jobs to get by. Many of them are fearful of how they’re going to pay their bills and turn their heating on this winter, some reliant on foodbanks. And a really shocking statistic is that there are now more foodbanks in this country than jobcentres.

What can we do about it?

The message was clear for those within the unions represented on the panel: to vote in the upcoming ballots for strike action, to clear the thresholds required by law; and to work together, with other unions and community groups, and to not feel like we have to wait for permission to act.

Ian Allinson (TUC) spoke about the importance of solidarity in the face of anti-union legislation: “We have to be ready for when Liz Truss tries to bring in more anti-union legislation. We have to make the arguments now about why those laws are unjust, and why they deserve to be defied. And of course, if some of our leaders do call unlawful action, we’re going to need more solidarity than ever if the courts take action against our unions.

“And of course, if it’s down to members taking action, or workers that are not even in a union, we have to make sure the whole movement has no hesitation in giving solidarity just because such action is unofficial. We have to remember the basic rule: it’s solidarity that makes us strong.”

“One of the changes they’ve already pushed through is the legalising of using agency workers to provide a scab labour force during disputes… If we don’t organise everybody who does the job or could do the job, we leave ourselves vulnerable when we take action, and I think we have to build that solidarity between the directly employed, the outsourced and agency workers.

When is a strike lawful?

Only if all of these conditions are met:

(Read more: When is it illegal to strike?)

Mary Bowstead (NEU) said that unions need to collaborate: “Now is the time for unions to come together. It’s no accident that the NEU will be consulting its members at the same time as NASUWT and the leaders’ union, the NAHT. That’s unprecedented. We’re seeking to coordinate the ballots, and seeking to coordinate when we do take action together.”

Connor McGurran (TUC) said “We need to take all of the issues of [the] unions and [the] workers to the government.”

The TUC’s programme of activity across autumn aims to do just that, said McGurran. More Town Hall meetings like this will be taking around the country to co-ordinate action, and a mass lobby of Parliament on 2 November wil take place alongside a rally in Westminster, designed to “flood Westminster with workers from up and down the country.” Those interested in joining can register to lobby their MP on the TUC website.

Rob Poole is the co-founder of StrikeMapUK, which is the first coordinated attempt to track industrial actions taking place across the country.: “We’re gonna see even more strike action from rail workers, from postal workers, communications workers,“ said Poole. “And we’ve got ballots coming up from firefighters, nurses, teachers (like myself)… This is why we launched StrikeMap in the first place – and it’s why, with the support of the Bakers’ Union (BFAWU), we’re now launching a new project called Organise Now!

Organise Now! is a peer-to-peer organising network that provides workers who are new to industrial action with support from experienced reps and activists to help them organise in their workplaces. Workers can submit a form on the Organise Now! website and will receive a call within 72 hours to talk through issues and plan their next steps.

RMT’s Darren Ireland said that, rather than bureaucracy, it will be “militant industrial action” that will win this dispute. “We can’t just have a meeting tonight and all go home, and come back in three months’ time and have another meeting and talk about the same issues again, we’ve got to take some concrete actions from meetings like this, so we actually build a mass campaign through the union branches, and through your communities, to make sure we collectively win together.”

Fran Heathcote from the PCS called for unity across all unions, adding, ”anybody who thinks that they can win on their own against this government, and stop the unrelenting drive for cuts and privatisation, is frankly kidding themselves.”

Book travel from Manchester to London for the 2 November rally with the People’s Assembly.