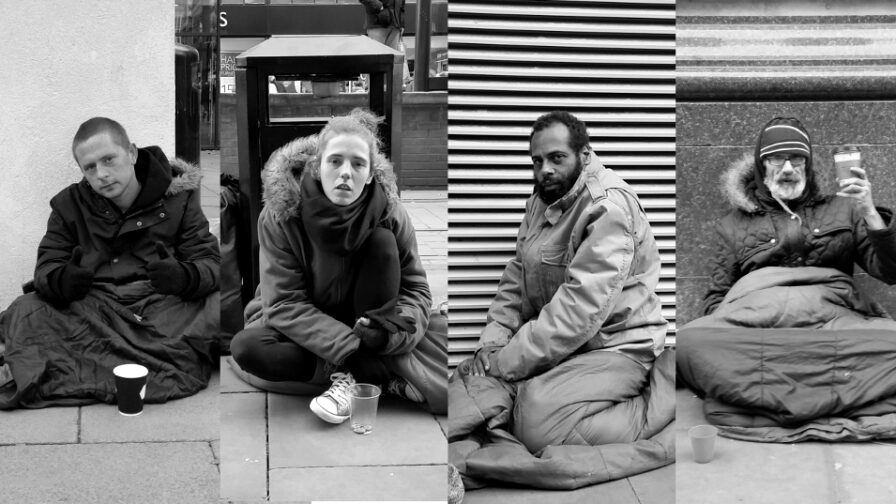 First article in ‘The Meteor Explores: Homelessness in Manchester‘ series. Part two can be read here.

Homelessness is often described as a complex problem, usually by those tasked with reducing it, and there are no doubt a multitude of factors that contribute to someone becoming homeless. But there is a common theme to the rise in homelessness apparent on the streets of Manchester and across the UK: the simple lack of resources allocated to keeping citizens securely housed and rehousing them once they become homeless. This lack of funding is driven by the ideology of austerity, embraced by the Conservative and Liberal Democrat (ConDem) coalition government in 2010 and continued by Theresa May’s government, despite growing evidence that austerity is a false economy with a huge human cost.

Pre-austerity, it looked like we were winning in the battle against homelessness, at least when looking at the national statistics for households accepted as statutorily homeless by local authorities; a council has a legal obligation to offer housing assistance to accepted households. These figures for England peaked in 2003-04 with 135,420 households accepted as homeless, and then fell to a low of 40,020 in 2009-10. The figures for 2016-17 in England stand at 59,090, a 48% increase from the low point in 2009-10. When the ConDem government came into power, the financial crisis began to bite, and the government’s austerity agenda was launched.

Households accepted as statutorily homeless in Manchester have risen by 133% from a low point of 533 in 2012-13 to 1242 in 2016-17. The official statistics for statutorily homeless households could be a lot higher than they are now except for a practice called ‘gatekeeping’. This involves councils, or outsourced homeless service providers, refusing to accept a homelessness application and/or provide accommodation to them.

Gatekeeping was facilitated by a piece of legislation passed by the ConDem government, the Localism Act 2011. This gave local authorities greater discretion in who to accept as statutorily homeless, and also the ability discharge their obligation to the homeless by offering them a one year tenancy in private rented accommodation rather than a permanent social housing tenancy. This has led councils to point homeless people to private rented houses or rooms before checking whether they meet the strict criteria to qualify as statutorily homeless, thus reducing the official figures. The Localism Act has also led to more homeless households being offered out of borough housing, contributing to the increasing trend of gentrification.

Walking around the streets of Manchester it is impossible to miss the homeless tip of the iceberg – the increasing numbers of rough sleepers in the city. Rough sleeping across England has more than doubled from 1,768 in 2010, to 4,134 in 2016. In Manchester there has been an even greater 11 fold increase in rough sleepers, from just 7 in 2010, to 78 in 2016.

The rough sleepers count is widely acknowledged to underestimate the problem. At a Manchester Council meeting in 2015, Councillor Hazel Summers said, “The headcount is set up in a way as to undercount the problem, as a snapshot of one particular night”. In the same meeting Jenny Osborne, Senior Strategy Manager of Public Health Manchester, indicated how inaccurate the rough sleepers headcount was likely to be by comparing it to data gathered from the Severe Weather Emergency Protocol, where the council has an obligation to house rough sleepers in very cold/bad weather. Osborne said:

To accommodate these cuts the council has had to slash the proposed budgets for many services, including Housing Services. This division of council service provides support for those who are already homeless, including rough sleepers, and provides housing welfare to prevent vulnerable people becoming homeless.

Rick Henderson, the chief executive of Homeless Link, which represents homelessness charities, said of the cuts to Housing Services:

“These essential services provide a lifeline for some of society’s most vulnerable people, as well as being beneficial for the wider community and the public purse, and they need protecting.

“While we recognise that local authorities are under significant financial pressure, the evidence points to the real danger that cuts today will result in immense long-term damage for vulnerable individuals and communities as a whole.

For 2009-10 the proposed Housing Services budget for Manchester stood at £67.5 million, this saw a drop of 74% to £17.5 million by 2016-17. The predicted budget for 2017-18 rises slightly to £23 million, but is likely too little too late to make a significant difference to the rising numbers of homeless including rough sleepers.

Due to the high prevalence of substance abuse (39 % have drugs problem and 27% alcohol) and poor mental health (~ 80 %) among the homeless, cuts to these services have a greater impact on them than the general public. The Social Care budget for Manchester, which provides support for mental health and substance abuse issues, was at a high of £307 million in 2011-12 but saw a drop of 22% to £240.6 million in 2015-16. This has recovered somewhat to a predicted £273.4 million for 2017-18, but still falls way short of the high point with no doubt a higher number of people in need.

The austerity driven cuts to local services are part of a failed economic experiment that the Tory government stubbornly refuses to acknowledge. One stated aim of austerity was to reduce the government budget deficit, the difference between how much the government receives, through taxes and other income, and the greater amount  it spends in a financial year. George Osborne initially planned to achieve a balanced budget, i.e. zero deficit, in five years, mainly by slashing public services. He failed and the UK deficit remained at £80 billion in 2015. Phillip Hammond, chancellor from 2016, has seen the deficit drop to £52 billion in 2017. He is still aiming for a deficit of zero, but has not set a hard deadline, vaguely pledging to eliminate it by the “middle of the next decade”; committing the UK to around eight more years of austerity.

The majority of British economists are certain that austerity damages the economy. A regular survey of a panel of leading UK economists is carried out by the The Centre for Macroeconomics in London. The survey asked the economists whether the coalition government’s austerity policies had promoted employment and growth, those saying the policies had not had a positive outcome outnumbered those saying it had by four to one.

An economist who has consistently criticised austerity driven cuts is Richard Murphy, author of the ‘Joy of Tax’ and a prolific blogger at Tax Research UK. Murphy argues that the view/theory backing austerity as a means of promoting economic growth has been completely discredited and says:

“Those who are now arguing for more austerity must share this view that government spending harms the economy, and that shrinking it delivers growth and so more tax revenue and so balanced budgets.

“But the reality should, by now have dawned on the Office for Budget Responsibility, whose forecasts have been consistently wrong…cuts shrink the economy, and so shrink tax revenues by more in many cases than the value of the cuts, meaning that austerity is in fact self defeating: you have slower growth, more unemployment and deficits still.”

Murphy also suggests that if the government collected the tax owed to it there would be no need for austerity driven cuts. The government provides a yearly estimate of  the tax gap, the difference between the greater amount owed in tax and the lesser amount collected. In 2017 HM Revenue and Customs (HMRC) estimated the tax gap at £34 billion a year, Murphy thinks the figure is much higher at £120 billion a year. More than enough to turn our annual budget deficit into a surplus.

The irrational and dogmatic nature of austerity ideology becomes readily apparent when considering HMRC itself has been subjected to austerity driven cuts, reducing its ability to collect taxes owed to the government.

Cuts to services that help reduce homelessness can have deleterious and costly effects on other services that deal with homeless people, a pattern often occurring with austerity induced cuts. Cuts to social care have placed greater burdens on the NHS, and insufficient funding for mental health has placed greater strain on police forces having to detain people experiencing mental health breakdowns.

A report by Crisis called ‘At what cost?’ provides a compelling argument of the economic folly that allowing homelessness to persist and rise engenders. It estimates the cost to the taxpayer, over a year, of preventing a person becoming homeless or letting that person become homeless. In the examples presented (based on real costs and experiences of the homeless) it estimates the extra cost to the taxpayer of not preventing homelessness ranges between £3,000 and £19,000 per homeless person.

Dylan Stratton is an ex-homeless person, who is now a Core Group Volunteer with Inspiring Change, helping the homeless in Manchester. Stratton has first hand experience of the extra resources needed from council homeless services, NHS and the criminal justice system when dealing with the homeless, saying:

“I was a frequent flyer to Manchester Royal Infirmary, because of some issues I have… I was that frequent you might think I had shares in the place, to tell you the truth, but I was flagged up as problematic. Since coming through the services I went through detox in prison. I came out and because I didn’t fit the criteria for rehabs, I was back onto the streets.”

Things changed dramatically for Stratton when he acquired stable accommodation:

“I think the most positive side of having my own property is I haven’t actually stayed in A&E for over three years, I have had no issue over going to A&E for whatever reason.”

But the pain doesn’t end here with current cuts to local authority budgets. The new Chancellor of the Exchequer Philip Hammond is still pursuing austerity cuts decreed by George Osborne. Local councils will see funding via the Revenue Support Grant fall 77% from £9.9 billion in 2015-16 to £2.2 billion in 2019-20. The Conservative’s quest for small government, at both a local and national scale, continues regardless of the excruciating effects it is having on the UK’s most vulnerable communities.

The only thing austerity has achieved is a reduction in the UK deficit.  But this has come at the cost of: increasing national debt, stagnating wages, loss of public sector jobs, poor productivity levels, increasing inequality, sluggish economic growth (compared to our peers), a growing housing crisis and increasing levels of destitution.

The cuts to local authority budgets are just part of the story behind austerity driven homelessness. Reductions and changes to the social security system, some beginning before the austerity era, are also causing extreme hardship and growing levels of poverty and destitution. These cuts, and their influence on growing homelessness and the housing crisis, will be covered in the second part of this story.

First article of two. Part two can be read here.

Feature image: Homeless people on the streets of Manchester city centre, who kindly gave permission for their photos to be published in The Meteor.