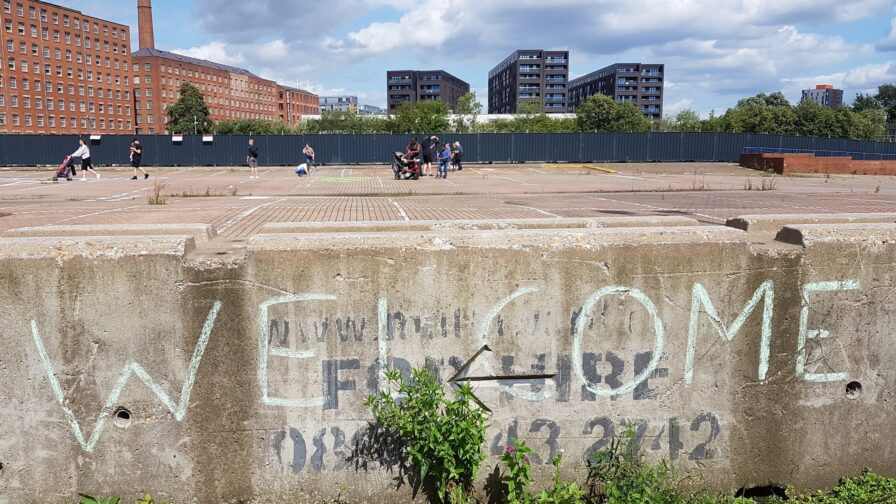 Residents are organising to turn a former retail site into green public space in defiance of council plans for a 440-space car park. The controversial proposal follows several contested planning decisions in Ancoats and Northern Quarter. Locals are staking a claim to the land for a ‘Peoples Park’.

Every Saturday Ancoats residents are bringing greenery and community spirit to the former Toys ‘R’ Us retail park off the Manchester ring road, to oppose development plans for the site.

They started last Saturday when people gathered on the site to plant the first patch of a ‘People’s Park’. Northern Quarter Forum and Trees Not Cars, were two local action group taking part who oppose the development of the site into a 440-space car park for five years, and then open it up to development after that. They have been organising a series of mini-events to bring life into the formerly derelict space.

At the event on Saturday around 70 residents gathered on the site and were joined by guerilla gardener Chris Thody, who plans to make a wildflower survey of the site and encourage people to use the space for “performance art, a kickabout, exercise, picnics and BBQ’s.”

My mini-event at the #PeoplesPark this Saturday at 1 pm is to conduct a wildflower survey of the park.. we will identify and label ( with chalk) any species we find
Bring chalk and a wildflower guide (app or book) if you have one @TreesNotCars #Treesnotcars

The action is one a series of conflicts over the purpose and quality redevelopment of the Northern Quarter and Ancoats with residents railing against and impenetrable and developer-friendly planning system.

Conflict over the 10.5-acre site began in earnest after council plans for a 440 space car park were revealed last month. Concerns have since been raised about increased air pollution not just for residents but also pupils of New Islington Free School which sits adjacent to the proposed site.

Pollution monitoring stations in the city centre regularly see air quality breach legal limits for pollutants such as nitrogen dioxide (NO2) and particulate matter (PM10). Both are dangerous pollutants are linked to long term organ damage, cancer and respiratory problems.

A diffusion tube monitor, situated on the corner of Ancoats Retail Park to record levels of nitrogen dioxide has never reported a legal measurement.

City-wide Manchester suffers from an ongoing public health crisis linked to air pollution while Central Manchester reports one of the highest rates of emergency admissions for asthma in the country.

Meanwhile, a study from the University of Leeds’ Institute for Transport found that as many as 38 per cent of new child asthma cases each year could be attributable to air pollution, with 24 per cent directly linked to vehicle emissions.

New Islington School has come out staunchly against the councils plans with a spokesperson highlighting concerns such as:

In a time of climate crisis the work of teaching pupils climate literacy, the school says, is being openly undone:

The proposal by the council to make interim use of the space as a car park came alongside the Council’s declaration of a climate emergency.

One clause of this declaration mentioned the need to make “climate breakdown and the environment, an integral part of activity throughout the Council, including all decision making, ensuring key decisions take into account the impact on achieving the zero-carbon target”

Within this new framework, it is unclear where the creation of further infrastructure for polluting transport fits.

A spokesperson for Manchester Council said of the proposed development:

“This proposal will not generate more traffic and is aimed at managing existing traffic in a better way. Having parking immediately adjacent to the inner relief road will reduce the amount of traffic penetrating both the city centre and residential streets to the north, with a positive impact on emissions and air quality.”

The council asserts that the retail park will alleviate parking stress from the city centre.

Final approval for retail park application was due to go before Manchester’s Planning Committee on August 22 but has been postponed until late September.

The council only plans to keep the car park for the “shortest time possible” and bring forward development. Part of what the council dubs a ‘transformative scheme’ is reportedly taking the form of 50,000 sq ft of office space targeted at the technology, media and telecoms sector.

The campaigners argue that a ‘transformative scheme’ would be the creation of the largest public green space in the centre of Manchester. A petition that has gathered over 8,000 signatures and rising, calling for “a Green Community Space, not a CAR PARK” seems to think so too.

Find out more about Trees Not Cars – click here