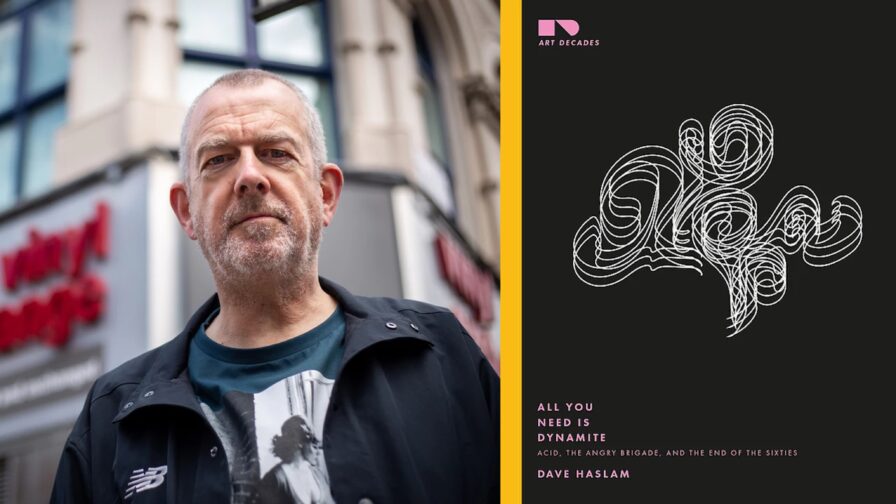 Dave Haslam, author, journalist and former resident DJ at the legendary Hacienda club, on the Angry Brigade’s campaign to bring about revolution and the role of underground press titles such as the Mole Express in Manchester in the 70’s.

Dave Haslam’s new book instantly piqued my curiosity with its bold title: All You Need is Dynamite. It evoked memories of one of my favorite films, A Fistful of Dynamite by Sergio Leone, where an Irish revolutionary and a Mexican bandit, played superbly by James Coburn and Rod Steiger, team up to fight in the Mexican Revolution. Explosions galore ensue and the authoritarian regime they are struggling against is defeated.

All You Need is Dynamite also concerns the desire for revolution, this time in the UK and Manchester, by a now little-known left-wing terror-cell called the Angry Brigade, which in a widespread campaign in the late 60’s used explosives to damage property in an attempt to change the UK system to a more egalitarian one. Researching the mini book, the fifth in the Art Decades series, Dave spoke to Angry Brigades members including a former resident of Moss Side in Manchester called John Barker, who was sentenced to ten years in jail in 1972 for his part in the bombing campaign. Haslam explained to me the gist of the Angry Brigades raison d’être he had learned from his conversations with its members:

“So if you were a cabinet minister, or you were the head of a large business who were making people unemployed, or involved in a conflict with trade unions, for example. Or you were some other symbol of imperialism or capitalism. You were a target.”

The Angry Brigade’s insistence on not taking life in its attacks was seen as a lack of conviction by supporters of other contemporary armed revolutionary terrorist organisations such as the Baader Meinhof group in Germany, and the Brigate Rosse groups in Italy, where many innocent lives were taken during their attacks and in the armed police response to them. Haslam said:

“Their lack of fundamentalism was seen as a weakness, whereas I think now, I think it’s something that we should applaud, especially after our experiences of terrorism in Manchester and elsewhere, you know in more recent years. I think that’s underlined to us the destructiveness and inhumanity of taking lives.”

A bomb found outside the Italian Consulate in Manchester, wrapped in a copy of Rolling Stone magazine which had fingerprints on it belonging to a former headgirl at a Stockport Grammar School, was one of the pieces of evidence presented against Barker and the other Angry Brigade defendants in the trial in 1972. And Haslam suspects the bombing of a sub-station in Altrincham was also due to an Angry Brigade action, which he investigates further in the book.

As well as facing criticism from the far-left, the Angry Brigade and its destructive activities were used as a weapon by the popular press to bash the “much bigger alternative movement” Haslam says, “by calling everybody angry and everybody violent and everybody extreme. It was a way that the press and the media found to undermine all manner of alternative ideas in the late 60s, early 70s, and there was a lot of them.”

Many of the Angry Brigades attacks went unreported in the mainstream press, at the insistence of the police who Haslam thinks feared copycat violence occurring. The Angry Brigade took to releasing communiques, half press release and half manifestos, to increase their profile which did find coverage in the underground press.

Mike Don and the Mole Express

The book opens with a scene in a communal house in Cannock St in Moss Side Manchester, in March 1971, where seven people are gathered round a kitchen table working on a new issue of the Mole Express. Mike Don was one of those people visiting the house, and three of the other residents would later that year stand trial for Angry Brigade activities alongside John Barker.

“He said they were his kind of people… He called himself an acidhead lefty… I think they probably smoked marijuana together. They hung out together, put the world to rights and talked about music, art, politics,” said Haslam.

Mike Don died while Haslam was writing the book, which became an unexpected tribute to his life and work. Don himself describes his relationship with the Angry Brigade in the book:

“They had much the same sort of politics as me, which is basically libertarian, socialist, anarchist… Their politics was fairly radical but they never gave any impression of being involved in planting bombs and so on.”

Don’s description of being an “acid head lefty” brought a smile to my face as I have done my fair share of psychedelics as a youth, which I suspect has influenced my politics, and the Mole Express’s reporting on social justice issues around housing, work, education, health and discrimination also has parallels to The Meteor’s work today, so I asked Haslam what the Mole’s major contribution to the media landscape of its day was:

“Providing an alternative voice, in all kinds of ways. Exposing town hall corruption became a very big part of what Mole did in the later part of the 70s. Also giving space and information to people who were engaged in political campaigns, everything from anti-apartheid to gay rights.

“So it filled what would have otherwise been a vacuum… It’s always useful for people to feel that connection between their world and concerns in their neighbourhood and the concerns of people elsewhere in the country and even elsewhere in the world, and the Mole Express kind of joined up what was happening in Manchester on the streets with the big political and social issues of the day.

I think that was a really important thing that the magazine did. It also had coverage of art, poetry, music… it covered peoples interests and concerns across a much wider and much more eclectic landscape than you often do get.”

Back in the 60’s and 70’s the main existential threat dominating peoples’ conscious thoughts was the threat of nuclear war. Now that threat, where many would die with a big bang followed by the rest freezing and starving to death in a nuclear winter, has receded to be replaced by the insidious creeping threat of climate change, where we mostly die whimpering and sweating as Earth slowly transforms into hell.

Haslam believes the lack of change in the situations people were vigorously campaigning against in the 60’s and 70’s such as the threat of nuclear armageddon, the war in Vietnam and ongoing discrimination across a broad spectrum of life, was the reason the Angry Brigade began their bombing campaign:

“For the Angry Brigade there wasn’t time for the long revolution. Something had to change at that moment. Which is why their actions tipped into violence” Haslam said and also referred to the parallels with the current existential threat of climate change which he described as “an escalating threat to mankind, and it’s urgent.”

Our discussion turns to Extinction Rebellion’s campaign against climate change and the government’s democracy undermining response to that and other campaigns, the police, crime, sentencing and courts (PCSC) bill. Haslam reveals information not included in the book that John Barker pointed to Extinction Rebellion as one of the groups that still carried a torch for the kind of things that the Angry Brigade were trying to do. Haslam went on to say:

“Similar things are being said about Extinction Rebellion as was being said about alternative movements at the end of the 1960s: ‘get a job’ you know all that. But I think the new police powers are about suppressing voices who are oppositional voices in all kinds of areas and clamping down on civil liberties of all kinds.”

Haslam referring to the government and media’s role in the current campaigns for justice says “while they control the media, they can control the message” which brings to mind the Tory governments cancellation of the Levenson two inquiry in 2018, which threatened to decrease the government’s grip on the message by investigating the often unhealthy relationship between the media, police and government. Going back to the PCSC bill Haslam says:

“One of the things it could do is if it’s a criminal action to meet with a few fellow citizens and carry placards through the streets. If that is deemed illegal, then people may think you might as well do something truly illegal, you know blow up a bank. In a way it’s going to increase the conflict. And I think increasing the conflict is part of the strategy from the government.”

Bringing up the leaders of other right-wing governments such as Richard Nixon, General de Gaulle and Ted Heath, Haslam says they presented the right as the side promoting, “law and order, keeping chaos at bay, protecting you and your family. And so in periods of conflict the more extreme the conflict, the more the right believe they maintain power.”

All you need is dynamite ?

A key Manchester venue for the counter-culture scene to let their hair down, affectionately described by Haslam in the book, was the Magic Village, a basement club and live music venue, established in 1986, which hosted bands such as T-Rex and Van der Graaf Generator. Cromford Court, where the venue was situated, is now buried somewhere under the Arndale Shopping Centre. Roger Eagle, the prime mover behind the Magic Village, invited Mike Don to set up a stall selling underground newspapers at the venue.

The title of the book, All You Need Is Dynamite, is taken from graffiti on a wall in London in 1969 by a group called King Mob, who were influenced by the French Situationist International. The Situationists believe that capitalism is a negative force that forces us into lives where we are mesmerized by the glamour of consumer society, and to escape this trap the web of illusions underpinning power and control must be destroyed or revealed for what they are. It was a movement that was also influential in the Angry Brigade’s formation and thinking.

I asked Haslam whether he thought that it was the case now, that all you need is dynamite? Haslam replied “I don’t think violence against people is ever the answer”, and went on to say that “one of the strategies that I think is undervalued – I’m not saying it’s the only strategy – but along with all the other multiple strategies you can think of to bring about social change. I think the idea of having fun is something that is often not recognised.”

Haslam describes playing joyous tracks such as Moving on Up by Curtis Mayfield and You’ve Got the Love by Candi Staton, that have gone down a storm at anti-fracking and anti-Trump protests in Manchester. The Situationists pointed out that the left were too often puritanical and negative in their struggle for justice and Haslam believes that providing a joyous atmosphere to the struggle is an essential component for successfully creating change saying that “dancing should be part of the revolution. I think dancing more than dynamite should be part of the revolution. And if only the left could see that, which they did in the years of Rock Against Racism, for example, then I think we can make a start.”

My advice is read the book, get your glad rags out, put on your dancing shoes, and let the revolution begin.

Dave Haslam is doing a promotional tour for  the book at the locations and venues listed below, for further information contact Confingo – click here