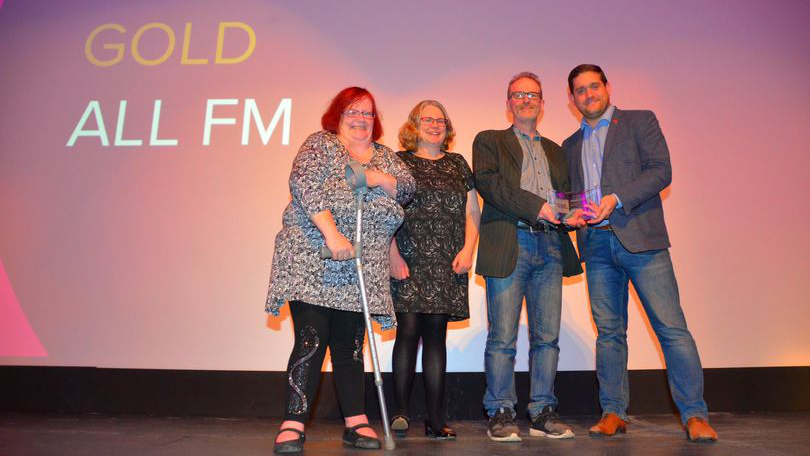 Manchester’s ALL FM radio station won the coveted Station of the Year award in a hotly contested national category, at the Community Radio Awards in Barry, South Wales, last Saturday. After bestowing the award judges praised ALL FM , one saying “possibly the most inclusive, diverse station I have ever heard and is a wonderful example of what Community Radio should be”.

Nominated for the third successive year, ALL FM 96.9 successfully managed to scoop the gold prize this year, against stiff opposition from Pride Radio, Spark FM, Wycombe Sound and Ujima Radio. Another judge at the competition said one of the reasons the Manchester station landed the award was, “the wide range of programming available and the clear passion of the presenters”.

Ed Connole, Director of ALL FM said.  “There are so many amazing community radio stations in Manchester and the UK. So we’re very proud to have won Station of the Year. This award represents the hard work, dedication and talent of our volunteers and staff who have been going above and beyond for over nineteen years. It’s a great achievement.”

Running with ethos of “by the community, for the community” ALL FM reflects the diversity of South Manchester with six foreign language shows. Their wide range of programming includes shows produced by, and for: carers, people on the autism spectrum, disabled people, people from BAME & LGBTQ communities and specialist music shows.

ALL FM is one of the longest running community stations in the UK. First airing as Radio Longsight in 2000 it received its permanent broadcasting license in 2005. ALL FM has 115 active volunteers and broadcasts seven days a week, 16 hours a day. The station moved earlier this year to a new base in Levenshulme, at the Levenshulme Old Library.

We are very proud to be recognised at the @CommRadioAwards as the Gold Station. We recognise and salute all those community radio stations in the UK helping to change lives. We are very proud. #CRAs19 #Manchester #CommunityRadio @MENnewsdesk pic.twitter.com/yCftrU5aED

A major part of ALL FM’s work is providing training in radio production from the technical facets of programming to journalism and presenting skills.

In November ALL FM has lined up a program of radio training projects for those who have long term mental health issues, out of work adults, women and older people at risk of isolation.

The courses will use ALL FM’s new broadcast and training studio in Levenshulme Old Library. The old library building, left shuttered after funding cuts, was transformed last year into a new arts and culture centre. This was the result of a long campaign by the Levenshulme community in which they convinced the council to asset transfer the building to them to use it. It is becoming a stalwart community resource once more, with ALL FM playing a key part in that transformation.