‘Stay strong, stay determined and stay out on strike’ – activists turn out for Manchester’s bus drivers 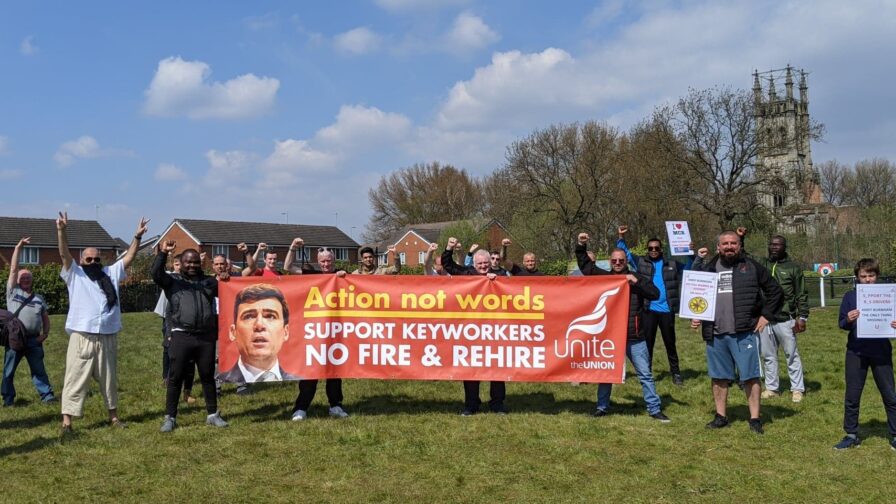 Activists attended the picket lines at Queens Road Depot in north Manchester to show solidarity with Go North West bus drivers, as Unite the Union announced new leverage campaign aimed at increasing pressure on Go Ahead Group to return to the negotiating table.

Go North West bus drivers employed at Queens Road have been on strike since 28 February, in dispute against the company’s so-called “fire and rehire” practices. Unite the Union, the trade union representing the drivers, has organised picket lines outside the depot everyday since the strike began. In a speech to the 150 people gathered, Ben Clay, representing GMTU, said:

“We are here to offer maximum support and solidarity. One message I would like to give to you is that what is important is yourselves. You are the ones who are going to win this fight. Stay strong, stay determined and stay out on strike.

“[Nigel] Featham [managing director of GNW] has got to be beaten for the whole union movement. Everyone is behind you, and as long as you stay solid we will be able to support you to win this dispute. That message is coming from around the country and from around the world.”

In May last year, Go North West offered drivers a one-off payment of £5,000 in return for altering the terms and conditions of their employment, as part of its cost-cutting plan. Unite the Union argues the changes will see drivers £2,500 worse off after three years, and highlight drivers’ sick pay has been drastically reduced in their new employment contracts. Go North West denies it is using fire-and-rehire tactics.

Go North West (GNW) operates 130 buses on 30 routes in Bury, Manchester, Oldham, Rochdale, Salford, Trafford and Warrington. Speaking on behalf of Better Buses Greater Manchester, Pascale Robinson told those in attendance: “We wanted to come here today to show solidarity with you, and we want to show you time and time again that we are a coalition of passengers and staff.”

Besides making speeches, Manchester activists put on a pantomime for the drivers, featuring Featham as a greedy fat cat, and Unite as the saviour of passengers and workers.

Unite organisers also announced the launch of its leverage campaign at the picket line. Bobby Morton, Unite National Officer for Passenger Transport, explained to The Meteor what this entailed:

“I use boxing parlance to describe this dispute… My General Secretary, Len McCluskey, called me down to London and asked me if I thought we would win this dispute. And I said, Len, we have knocked Go North West around the ring every round. However we can’t deliver the knockout punch. I need to deliver that knockout punch, but I need your help.

“Len told me he would start a leverage campaign. The idea is that we ratchet the dispute up every day. From now until the dispute has ended, there will be a problem for Go Ahead Group [GNWs parent company]. Each single day, we make it worse for Go Ahead Group. We will not run out of ideas.”

The leverage campaign involves leveraging the union’s international network to exert pressure on Go Ahead Group (GAG), instead of just targeting Go North West, Morton said. He explained to attendees in a speech given at the picket line that the campaign had started in Sweden, where, Morton alleges, GAG is looking to win rail contracts:

“Sharon [Graham, Unite assistant general secretary] approached a number of Swedish parliament members. In Sweden, fire and rehire is illegal. So, we are talking to a group who have our sympathy. Sharon informed Swedish MPs that their parliament was about to sign railway contracts with Go Ahead Group and asked them to refuse to enter into any business with GAG because they’re in favour of fire and rehire. Now the Swedish parliament has decided that they will not deal with the Group now.”

As part of the campaign, on Thursday Unite called on Andy Burnham and Sadiq Khan to publicly back a declaration to outlaw fire and rehire on bus services. Unite argues the mayors have the power to bar employers from bidding for bus contracts controlled by Transport for London and Transport for Greater Manchester respectively.

In February, The Meteor reported Burnham had branded fire and rehire “industrial blackmail”. Burnham also visited the picket line on 7 April. He is yet to state publicly that bus companies using fire and rehire tactics to reduce costs would be banned from running Manchester’s newly franchised bus network. Morton told The Meteor Burnham had said to Unite negotiators that there were legal issues with not rewarding bus companies’ contracts on the basis of fire and rehire practices. Unite insists that there are “no legal problems”.

Colin Hayden, a Unite representative and a Go North West bus driver, said Andy Burnham needed to back drivers. “We want Andy Burnham to publicly back our declaration to outlaw fire and rehire, to stop bus companies using it to get future bus contracts.”

Hayden was clear what members of the public should do if he failed to act. “Don’t vote for him. If he is backing fire and rehire, I just do not think he should be mayor of this great city we live in.”

There have been signals from local government that it opposes awarding contracts to companies using these employment tactics. Manchester City Council two weeks ago passed a motion opposing publicly fire and rehire. “We need the likes of Salford, Tameside, Trafford to all jump onboard,” Hayden says. “Otherwise they are siding with a company which has trashed industrial relations.”

Go North West has been engaged in discussions with Unite since March last year to agree a way to stem £2 million in annual losses being incurred at Queen Road depot. The company has stated that the losses are due to “outdated working practices and customs” which “most of the bus industry moved on from years ago”. Unite said that Go North West was only operating at a loss because Go Ahead Group, its parent company, had saddled it with debt.

Go North West argues the drivers have signed up to the new contracts voluntarily, but Unite claim this was under duress. Sam Harvey, a Unite representative, explained to The Meteor:

“When Go North West issued the Section 188 notices [‘fire and rehire’ notices], we entered into one-to-one discussions with management but we were denied union representation, so drivers could not get any advice. We put out grievances to say we want union representation in this meeting, and they denied that. We were told, sign your contracts, or in seven days lose your job.”

“We are not just doing it for us, we are doing it for other bus drivers and other employees in Manchester and across the country, because if fire and rehire is allowed to happen here it’ll happen elsewhere. Employers will see they can do it, and it will start a race to the bottom. We have had a lot of support from the public. We just hope they’ll continue to support us until we win.”