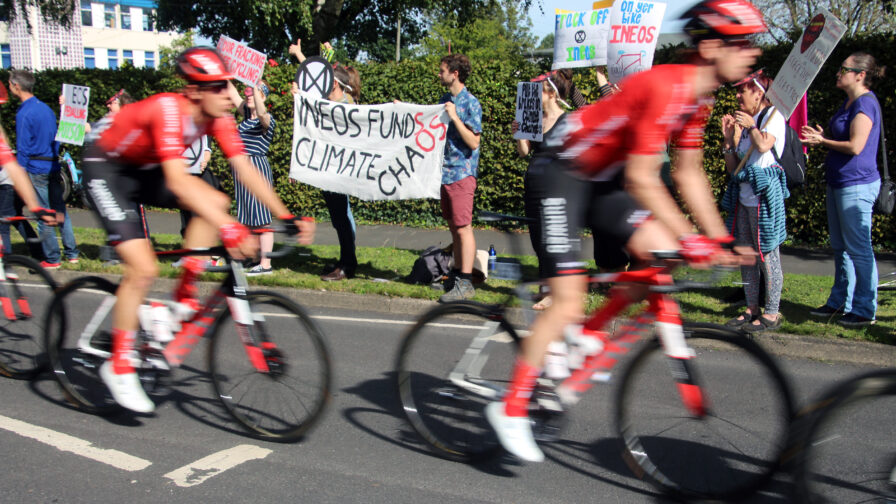 Anti-fracking activists took to Deansgate last weekend to protest the sponsorship of the British national cycling team by Ineos, the fracking company and chemicals giant.

While remaining peaceful and respectful of cycling fans, the protestors gathered at the start of the race in Altrincham and at the finish in Deansgate. The protestors held banners and placards to demonstrate their opposition to what they called the ‘greenwashing’ of Ineos’s public image. They wore devil masks with a counterfeit of its chairman and chief executive, billionaire Jim Ratcliffe, to highlight the “true face” of the sponsor.

Ineos took over from Sky in its sponsorship of British cycling in March this year, with the team being renamed from Team Sky to Team Ineos. Ineos holds a large number of licences for fracking in the UK, including Barton Moss, Salford.

Ineos uses fracking gas to power its virgin plastic manufacturing facilities. Its largest site by volume of product is in Grangemouth in Scotland, where 300bn plastic pellets are manufactured every week. These pellets are used as the raw material to manufacture products, from supermarket food trays to bottles.

The pellets are also one of the worst sources of ocean microplastic pollution because of spills during production and transport. In May 2018, about 450,000 plastic pellets were found on a single beach in Scotland, not very far away from Ineos’s biggest facility in the UK. Post-mortem examinations of endangered puffins and gulls have also found plastic pellets in their stomachs.

“Ineos is a company which bets on the dirtiest of fossil fuels,” Andy Gheorghiu, a campaigner at non-profit Food and Water Europe, said. “Its vision runs contrary to everything we are doing right now to combat climate change.” Barry Wooding, an activist for the Barton Moss anti-fracking campaign back in 2014, said that Ratcliffe was embarking on a programme of ‘greenwashing’ Ineos’s public image and that associating with clean air and sustainable transport initiatives like cycling enabled Ratcliffe to mask the company’s extractivism, emissions and pollution.

Allan Challenger, Secretary of Frack Free Greater Manchester, said the purpose of the demonstration was to raise the public’s awareness of Ineos’s environmental impact by highlighting the link between Ratcliffe, fracking and single-use plastics. “It’s about holding companies to account for their contribution to pollution. We want companies to be responsible for their products end to end, from production to waste disposal.”