ACORN will fight to ensure there are no Covid-19 evictions 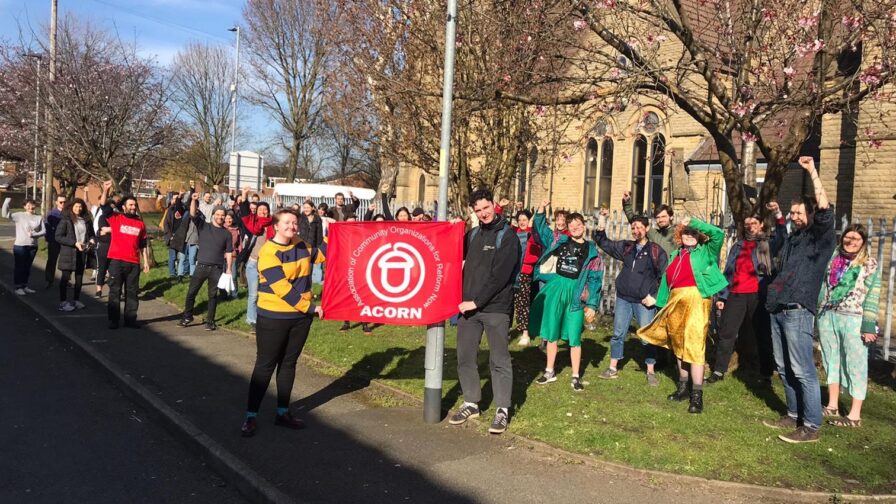 ACORN tenants union in Manchester are fighting against the threatened ejection of homeless people housed in hotels and the growing threat of eviction for private renters burdened with growing rent arrears due to lockdown.

They have put together six key demands to create a healthier housing system nationally and are petitioning Greater Manchester councils to prevent evictions and homelessness.

That Greater Manchester has a serious homelessness problem should come as no shock to anyone living in the area, nor will the fact that huge swathes of Greater Manchester residents that rent their homes are in extremely precarious positions, even prior to the Covid-19 crisis.

These two issues are intertwined and the struggle against them both goes hand in hand; an unstable, expensive, and inadequately regulated private rental sector has played a substantial role in exacerbating the homelessness crisis in England’s second largest metropolitan county.

As the country slowly eases its way out of lockdown, the immediate focus is on what we do over the next 12 months. But it is essential that we understand the future implications of these short term decisions and actions in order to build a better housing system in the longer term.

Danger of going back to the old “normal” of homelessness

One of the most urgent of these potential decisions is around the future of the government’s ‘Everyone In’ scheme.  In late March the Government wrote to councils across the country and advised them to do everything they can to provide a living environment in which homeless people were able to self-isolate, including housing rough sleepers in hotels if necessary. The Greater Manchester Combined Authority has since spent £2 million on this, and housed almost 1,600 people – around 400 of those had become homeless since the pandemic began.

The Manchester Evening News have reported that the Everyone In scheme funding has been cancelled by the central government, and hundreds of the homeless people in Greater Manchester put up in Hotels face the prospect of being ejected onto the streets again.

The GM councils are working to ensure that those housed under the scheme will be moved on from hotels into settled or sustainable temporary accommodation. But with resources stretched further than ever, if the government does not provide further funding and a continuation or follow up plan to Everyone In, then it is inevitable that rough sleeping will increase, and with it the risk of Covid-19 to an already vulnerable population.

Having worked so hard to provide alternative accommodation for so many people in such a short period of time, it would be morally and practically wrong to go back to “normal” and throw these people out onto the streets again. ACORN’s pledge to fight for “no Covid evictions” means we will resist any decision that tries to evict these temporarily housed vulnerable people and return them to sleeping rough.

A second wave of homelessness

As things stand, a second wave of homelessness is likely to tear through our communities in the near future as a predictable consequence of both the likely end of the Everyone In policy, and the upsurge of evictions that look set to follow the end of the government’s three month ban on evictions that has been in place since 26 March.

While the eviction ban was a welcome intervention, no action has been taken on a national level to prevent renters from racking up rent arrears due to job losses and lower incomes. We know from experience that relying on the good will of landlords is not a recipe for success, and as such it is undoubtable that renters will be evicted as a result of rent arrears once this deadline is up if no further action is taken.

There are over 400,000 private renters living in Greater Manchester, and with around 1.7 million renters across the country expecting to lose their jobs throughout the course of the Covid-19 crisis, it is clear that the shocks of this will be felt by many of those renters in the area. In Greater Manchester, the single most common cause of homelessness is eviction from a private tenancy, and this was already on the rise prior to the pandemic.

In-work poverty was a huge issue in Greater Manchester prior to the pandemic, with 43% of Local Housing Allowance benefit claims coming from households in work. Household income data shows that Greater Manchester has 20.5% more low income households than the national average. This, alongside the growth of the gig economy with its “flexible” contracts, and dwindling supply of social housing has led to an overwhelming reliance on the private rental sector, and as such any instability in employment and wage levels will have a damaging impact on people’s ability to pay rent.

Local government can play a positive role in ensuring that an already desperate homelessness crisis is not exacerbated in the near future. As a region that has committed itself to ending homelessness, the GMCA and all ten Local Authorities in Greater Manchester must do all they can to prevent evictions as a result of the pandemic.

ACORN Manchester have long worked towards the renewal and expansion of selective landlord licensing schemes in Greater Manchester, and Manchester City Council had recently published their plans to do just that in the city before the Covid-19 outbreak. This would mean a higher standard of protection for renters from the rogue landlords that we know plague the city, an improved standard of housing, and it would provide Local Authorities with the power to guarantee resident’s homes are up to scratch.

There is no better time than now for landlord licensing to be expanded as much as possible; landlords must be subject to the same checks and balances that others, from butchers to taxi drivers, are. Housing is a public health issue now more than ever, with people confined to their homes it is unacceptable to continue turning a blind eye to substandard housing conditions in the private rental sector. It is of the utmost importance that plans to renew or expand landlord licensing schemes must continue and be hastened.

All ten local authorities in Greater Manchester are in contact with many private landlords, either through the mandatory licensing of HMOs, or through selective licensing schemes. Communication with landlords in regards to preventing evictions may well make all the difference in preventing a wave of evictions that would create a rising tide of homelessness. It is absolutely vital that these avenues of communication are used to their fullest extent, alongside other powers. ACORN Manchester have created a petition calling upon the Greater Manchester Combined Authority and the 10 Local Authorities to:

To efficiently tackle this crisis there also needs to be action on a national scale. The national government has previously committed to putting an end to Section 21 “no-fault” evictions, however it is unlikely that this will be done prior to the eviction ban being lifted. Even if this type of eviction is ended it will not protect renters who have accumulated rent arrears over the last few months of lockdown.

The scale and duration of the impact of the Covid-19 pandemic is as yet unclear, in medical and economic terms. The response to this uncertainty must not be to return to business as usual; both national and local government must re-evaluate the economic assumptions that have underwritten their relationship with the private rental sector in recent years. Tenants, not landlords, must become the priority, or it is glaringly clear that a new wave of homelessness and housing insecurity will soon be upon us.

Jack Yates is a member of the Manchester branch of the ACORN community and tenants union.

ACORN is a union which campaigns to further the rights of ordinary people by organising where we live to stand up to landlords, businesses and governments. ACORN Manchester is the local branch for Greater Manchester.

To join ACORN, or find out more about them – click here