Access to Pride should not be denied to disabled people 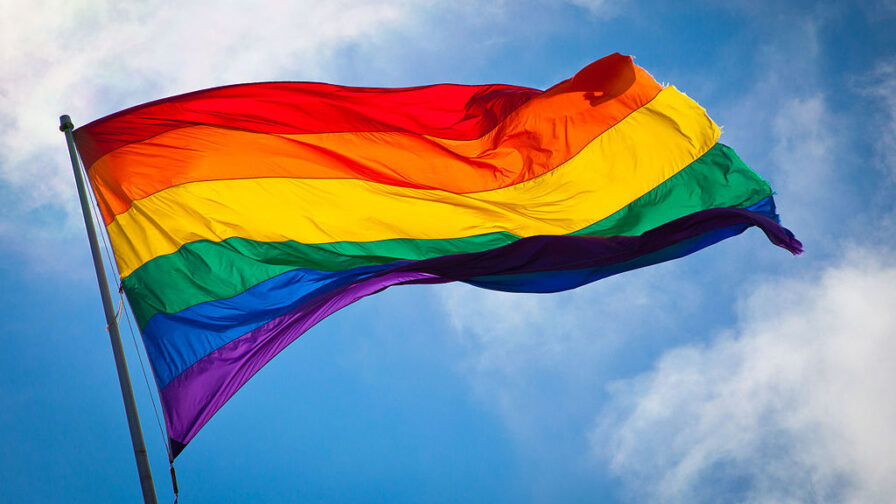 Pride in Manchester is becoming a bigger event with each passing year, reflecting the city’s reputation as a diverse and LGBT+ friendly place. But this year’s Pride celebrations were not inclusive for everyone, as some disabled attendees discovered during the weekend’s events. Concerns about event pricing, over-ticketing and poor organisation were raised by many people, but these inconveniences became major issues for disabled people that required adjustments to the event that were not properly implemented.

Those affected took to social media to raise concerns and highlight the difficulties they experienced at events catering predominantly for abled guests. Over the Pride weekend, thousands of people came to Manchester and gathered in a small region of the city. It’s a major health and safety matter to accommodate this volume of people in general, but additional consideration must be given to those with accessibility issues to ensure the enjoyment and wellbeing of all guests.

Designated accessibility viewing platforms were created, but unregulated by event security. This resulted in able-bodied people jumping over barriers and blocking the view of those seated and in wheelchairs. This behaviour went unchallenged and other guests in the area did nothing to intervene. Travelling around the Gay Village during Pride is difficult for anyone due to the sheer volume of people attending, but this year’s Pride was not accessible for those with mobility issues. Disabled guests were unable to reach dedicated accessible areas, and toilets and seating were under provided and in inappropriate locations.

The public at the Pride Parade also paid little regard to accessibility issues, facilitated by Pride security failing to control the crowds. Bobby Kent, who has spinal muscular atrophy type 2 and uses a wheelchair, photographed his view of the parade and described the behaviour of those who stood in front of him: 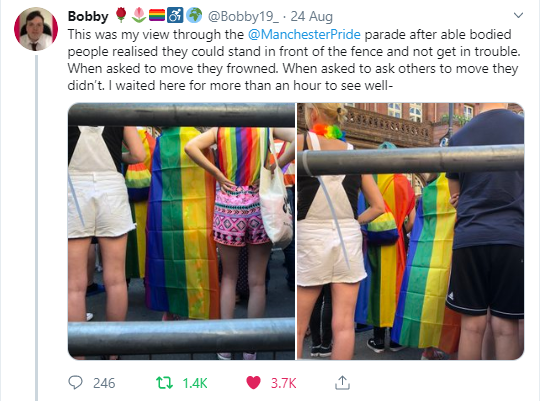 “-in my wheelchair, but at their first opportunity they blocked my view for the whole thing. I’m so fucking humiliated and upset.I’m not the type of person to go out of my way to make a fuss but this seriously damaged my confidence publicly and I just want to vent about it.

“You’re only as inclusive as you are accessible. I was meant to be at a stall after this but I’m too upset and embarrassed for being in a stupid fucking wheelchair so I’m just gonna go home.”

Bobby received a reply from the Senior Operations Manager of FGH Security, the contractor providing crowd safety services, saying that “next year I will personally ensure that [he would] have “the absolute BEST experience of our wonderful Manchester Pride Parade”. That’s good news for Bobby, but of little comfort to other disabled attendees that risk experiencing another Pride where they are literally pushed to the margins.

Bobby has offered to consult with Manchester Pride on access and inclusion issues for disabled people, and is awaiting a response. He says that “Pride itself should take on board more disabled voices when planning these things” so that this doesn’t happen to any disabled people, not just him.

As Manchester Pride has gained popularity and grown from its origins in 1985, the grassroots enthusiasm and community spirit has fallen prey to commercialisation and exclusivity. The event has for a long time been ticketed, which has its pros and cons. But the 2019 ticket price, at £70.95 for the weekend were far higher than last years comparable ticket at £28.

There are reports of racial discrimination at Manchester Pride  and it was the latest Pride event to have its parade hijacked by trans-exclusionary radical feminists. It’s not just the disabled who are feeling excluded, but working-class, BAME and transgender people also.

Manchester Pride Limited states on the charity commission’s website, that it is a charity set up to:

“Promote equality and diversity for the public benefit and in particular the elimination of discrimination on the grounds of sexual orientation, including in particular but not exclusively by raising the awareness of the public with regard to all aspects of discrimination in society and issues and difficulties affecting the lives of lesbian, gay and bisexual and transgender people.”

They failed in their aims this year; this must not happen again. Bobby has written an open letter to the organisers of Manchester Pride outlining his concerns and those of other attendees who were unable to enjoy the best of the weekend because their access needs were not catered for. You can sign it here.