Consent To Entertainment: The Newspaper Boy 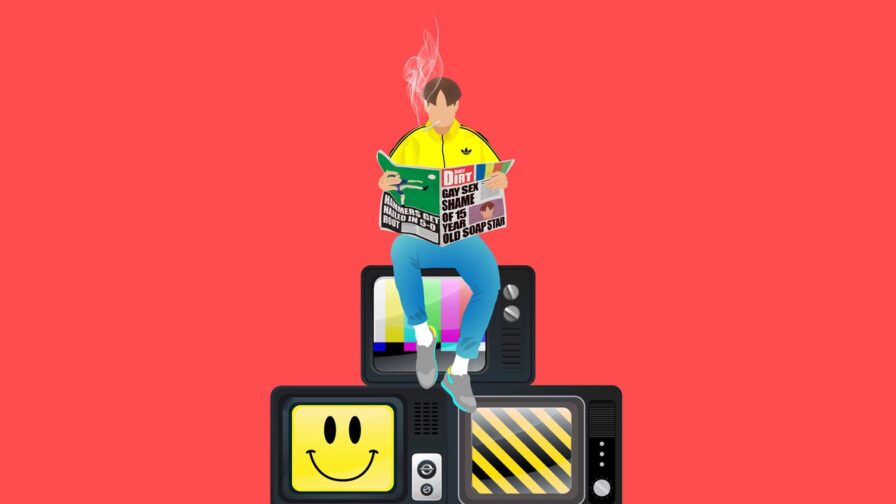 It probably says a lot about the kind of theatre I’m accustomed to that I was initially disappointed by the lack of soliloquies and arty shouting. After some adjustment, it turns out that well-drawn characters struggling relatably against society’s pettiness and cruelty, speaking from the heart with witty, unpretentious dialogue, against a backdrop of impeccable period detail and great music… Well, blow me down if it ain’t entertaining.

Set in Manchester in 1992, The Newspaper Boy tells the story of Christian (Daniel Maley), a headstrong 15-year old whose nocturnal antics at the Hacienda and the Gay Village begin to threaten his promising career as an actor in a popular soap opera.

The play is a semi-autobiographical retelling of writer Chris Hoyle’s travails with the Coronation Street Industrial Complex in the early 90s. A child actor in the hedonistic heyday of acid house, success went to his head and he was booted from Corrie after being caught in possession of weed, much to the delight of the tabloid press. Tabloid gossip about hedonistic celebrities has often carried a homophobic subtext, and by tweaking reality to have the main character’s scandal explicitly relate to a love affair with an older man, Hoyle dredges up this fatberg of hate and puts it on display. 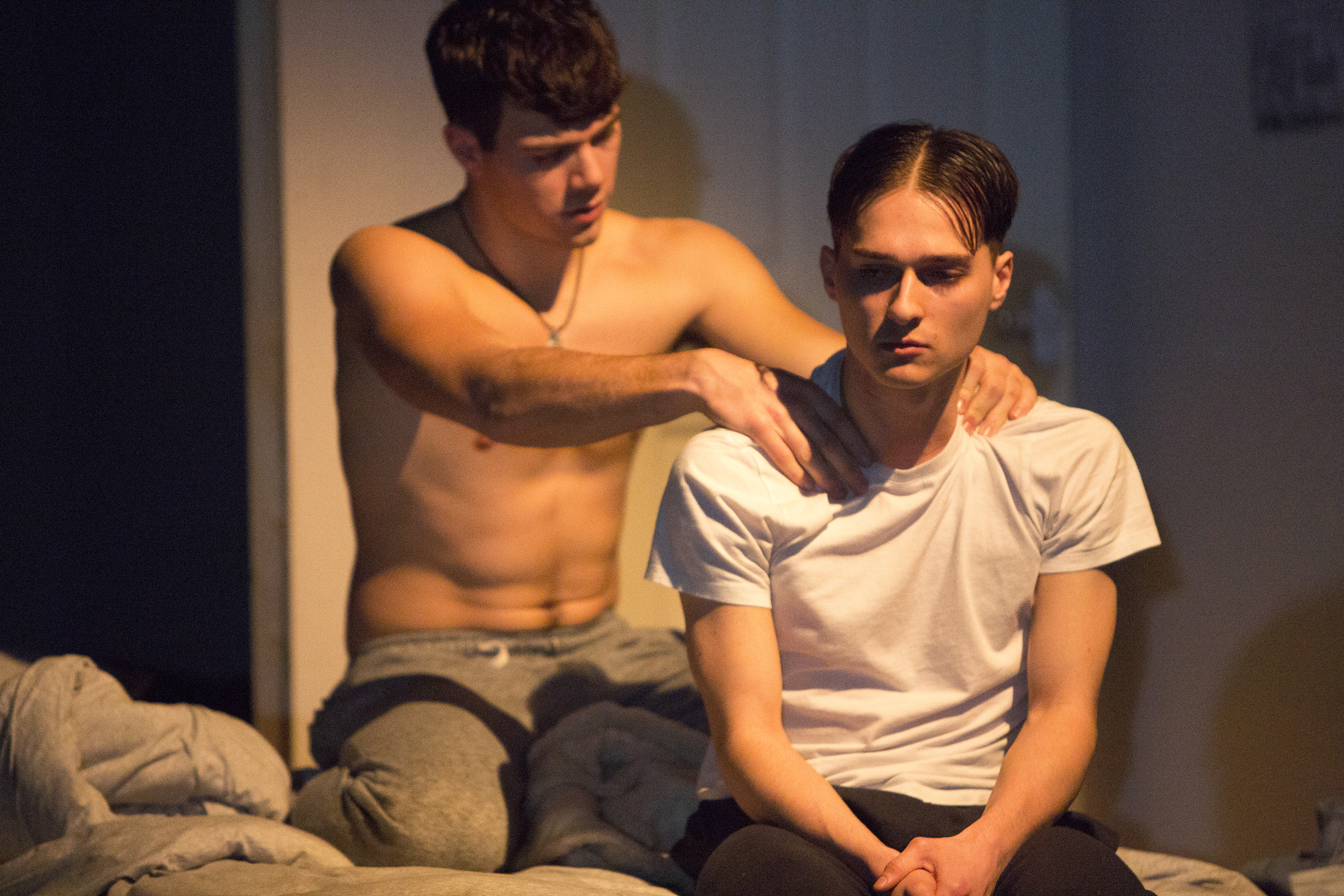 Teenage Christian’s relationship with the 21-year old Max (Sam Retford) does not fall into the standard narrative of innocence corrupted, a trope teased at by Christian’s petulant and seductive co-star Mandy (Hollie-Jay Bowes), who initially lures our protagonist onto the rocks (and gets to say lines like “you’re the most beautiful blank canvas, one that I can decorate and corrupt”). The gilded cage of Fame Too Soon, which often surrounds its prisoners from birth (“If I was born with ginger hair and green eyes, then I got the part”) is instead presumed to be the scourge of young minds, and that which drives them to find empowerment and release by losing themselves to dancefloors and sex. We feel for Mandy when she makes a monster of herself by screaming at ITV’s long-suffering make-up artist that she wants to do it her way. Christian asserts his own identity in his desire for Max, who fears jail if he succumbs to Christian’s come-ons. A queer sexual awakening is never easy, but throw in the harassment by paparazzi, and the lover who can be imprisoned if caught, and any envy or schadenfreude we might have for the precociously successful is dispelled completely.

New Order’s Age of Consent turns out to be an inspired curtain-opener, and we might want to take another look at Chomsky’s Manufacturing Consent for a fuller understanding of the play’s political message. Grandma Jean (Karen Henthorn) begins the show in a ‘Bollocks To The Poll Tax’ T-shirt and gradually takes on the role of flagbearer for the rights of the downtrodden, culminating in a beautiful rant against the TV station establishment for its hypocritical treatment of her grandson – trading in stories of flawed humans acting out their secret desires whilst disowning the humans acting out the stories. The mass conditioning towards indulgence and licentious behaviour done by culture in general and television, in particular, is playfully hinted at by the era-appropriate advertisements for sweet treats. Fans of ‘This Is England’ will enjoy the instant scene-setting nostalgia. 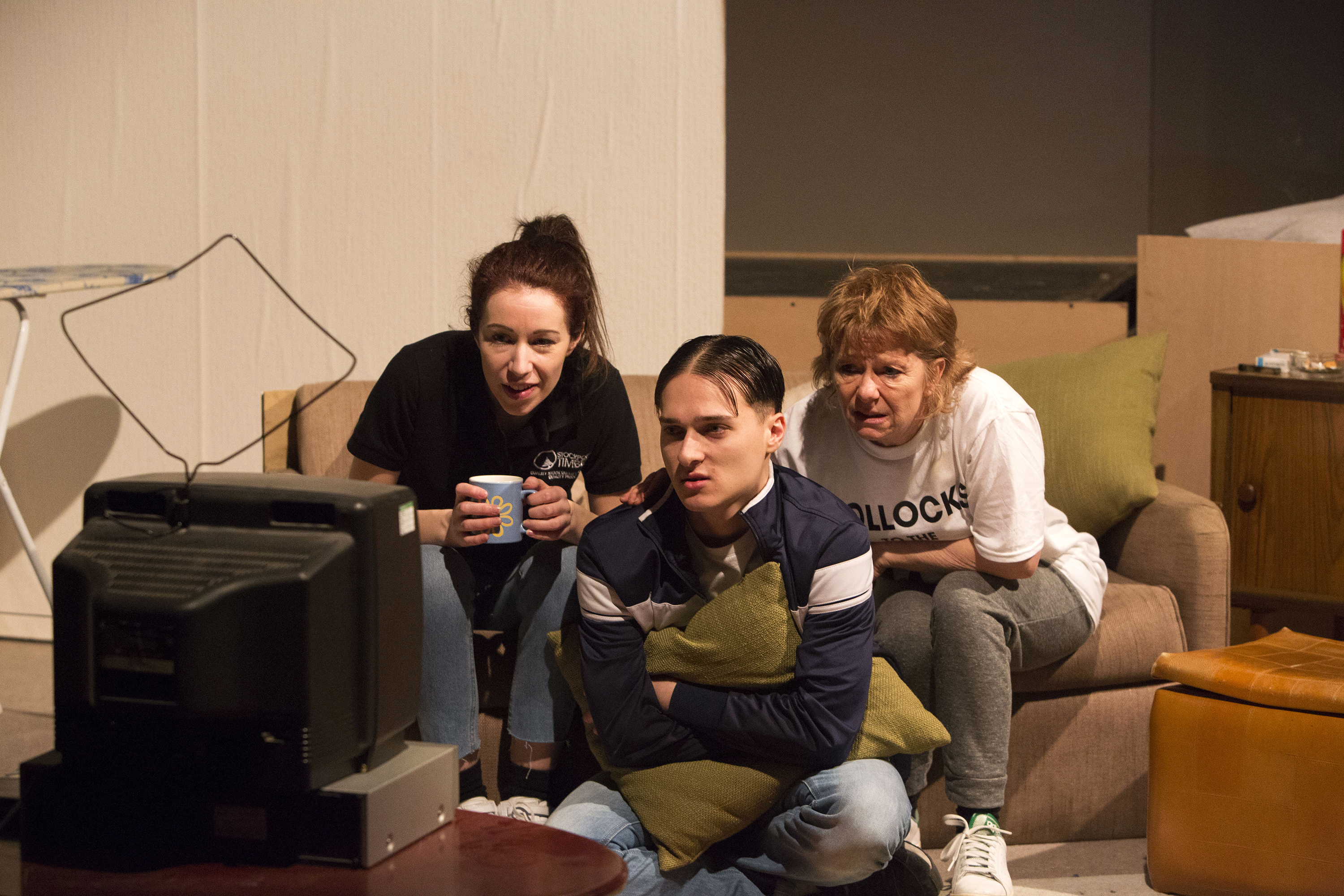 The influence of Coronation Street extends further than the subject matter. The wit and relatability of the characters carries through, as does the rapid alternation between sarcasm and earnest emotional exposition – characters blowing hot and cold like an out of place colloquialism. Hoyle has actually mentioned he’d like to write for Corrie and he’s right that he’s got the voice for it, although perhaps Shameless is a closer comparison to The Newspaper Boy. The contained format obviously makes for a tighter dramatic experience closer to box-set series than sprawling soap, and the adult themes enable greater frankness and emotional honesty. There’s no schmaltz when the lovers confess their mutual admiration: “I wank off to you too.” More complex moments also get this treatment, as when the mother, Sharon (played by Shameless star Samantha Siddall) is confronted with news of her son’s affair and the lies he told to hide it. In that moment, her plea to her son that she might remember their love is simple, powerful, and resonant: “Look at me.” At its most raw the play feels like a heartfelt thank you, or apology, to Chris’ mother and grandmother.

During the intermission, another audience member said: “it must be good because it feels like an uncomfortable intrusion.” Indeed you agonise with the protagonist who cannot ‘anonise’ (a humorous and potentially Freudian mispronunciation of ‘analyse’ by the grandma), however the level of discomfort you feel around this sort of thing might vary depending on your background. The play’s squishy intimacy and emotional transparency are only too familiar for the generations of oversexed oversharers that continue to wobble off dancefloors up and down the country, but it’s important to remember that much of the mutual trust and emotional literacy some of us now enjoy would not have emerged without the late 80s / early 90s party scene, so attractive to the likes of Christian and Mandy, and so expertly depicted in this play.

In a similar fashion, we now mince proudly in the footsteps left by prominent and unapologetic queers who fought in cultural battles long past, battles dying to be sang about. Like it or not, the second half of the 20th century marked a significant cultural shift towards people being out and proud of their individual and collective fabulousness. People began to stay a bit more true to their biology, and though we sometimes get up our arses about it, it’s worth remembering that for a moment there, Manchester was a catalyst for this paradigm shift. Someone on the grapevine said that this play made them feel proud to be Mancunian, and I’d agree with that. Celebrate a city that insists on disco.

The play runs until this Saturday, Feb 24 at 53two. Tickets are available from www.fatsoma.com/thenewspaperboy