By Jonathan Schofield | June 22, 2021Friends of The Meteor 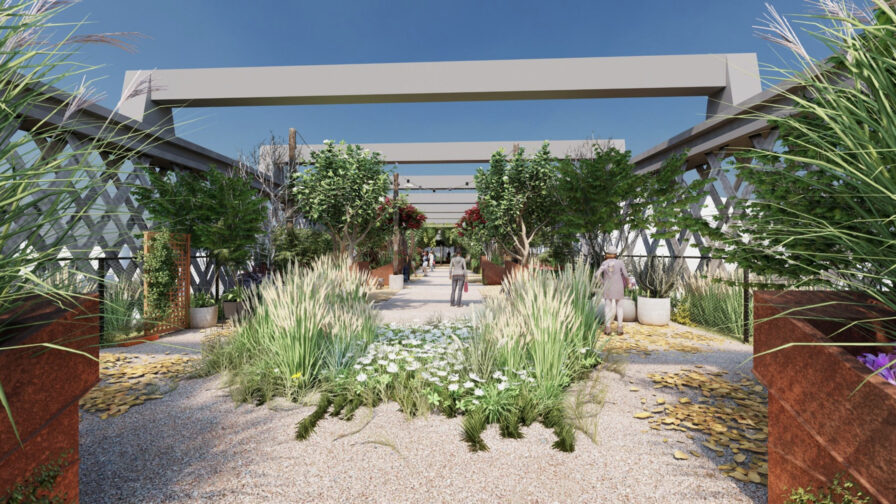 Jonathan Schofield and how the National Trust have moved to beautify engineering.

This article was originally published in Manchester Confidential.

This is great news. The disused viaduct running alongside the Metrolink line in Castlefield is to blossom.

Confidentials suggested this back in 2007 in a series of articles that led to public meetings hosted by the city council and the formation of the magnificent Castlefield Forum. This charitable body is an excellent example of an active and engaged city centre community group.

As with a great number of people, Confidentials had been concerned about the shocking state of Castlefield in 2007, so we’d commissioned a first article from well-known city commentator Phil Griffin.

In the second article we wrote: “To treat Castlefield the same as any other city centre district, not only in Manchester but in the UK, is wrong-headed. This is a place where a huge history and a powerful urban landscape come together. In the true sense of the word, Castlefield is ‘unique’ and should be treated as such. Thus simple husbandry, the maintenance of a crumbling infrastructure and the sporadic upkeep of planted areas is not enough. We have to take things much further.”

The quote above recognised that at this location we have the oldest completely artificial canal of the industrial age from 1761 and the oldest passenger railway station in the world from 1830, amongst other treasures. There is a modern landscape too of flats, gardens, art galleries, more waterways and lots of food and drink establishments.

We also suggested the green spaces within the area should be a series of immaculate pocket gardens full of colour and beauty. We suggested the fine but disused iron viaduct in Castlefield from 1892 should be turned into an elevated garden akin to the High Line in New York or Promenade Plantee in Paris.

Progress has been made by Castlefield Forum in caring for the area in subsequent years, but sadly, after minor improvements, the city council has allowed some of the major heritage assets to deteriorate.

Back to the viaduct. That suggestion to convert the viaduct into a garden was 14 years ago. Now, at last, there’s action.

The National Trust has stepped in.

This is part of the institution’s desire to bring the benefits of its custodianship into urban areas. The initial design ideas have come from Twelve Architects Masterplanners.

Mike Innerdale, the Regional Director for the North at the National Trust, says: “National Trust houses, gardens and outdoor places in the North West welcome over a million visitors every year. However, we understand that these places can be hard to reach for people who live closer to the city and access to good quality green space in urban areas is limited. The viaduct gives us an opportunity to create an accessible green space for the 50,000 residents living within a twenty-minute walk of the area of Castlefield.

“As well as transforming the viaduct into a green space for people, we recognise the viaduct’s importance to Manchester’s history and the need to protect it.”

Andy B’s got in the act, of course. The Mayor of Greater Manchester says: “It’s fantastic to see the National Trust’s plans for breathing new life into this landmark and I look forward to working with them to make this a reality. Greater Manchester’s parks and green spaces have been a lifeline over the pandemic, and we’ve all been reminded of how important access to nature is, which is why I’m committed to creating greener, more liveable communities. This project could make a big contribution to this goal – and help revitalise our city’s heritage at the same time.”

Just as importantly Castlefield Forum are fully engaged. Calum McGowan, Chair of Castlefield Forum, says: “To be approached by the National Trust to help galvanise our community around this project is something we have run straight towards and we are thrilled to be working alongside them. From the humble beginnings of the Forum we have often stared up longingly at the old viaduct, thinking ‘what if?’. We have always had it in our sights to bring it back to life, but now there’s a very real chance the viaduct will be back in use. And sooner than we had ever expected.”

Trial runs of how the viaduct might look are to be run as early as next year. These are only early stages in the process so the full planting scheme may look differently from the visualisations here.

Members of the public who live close to the viaduct are invited to find out more about the proposals, help shape the plans and have their say at events taking place in June and July. Online events will take place on Wednesday 30 June, Thursday 1 July and Tuesday 6 July 2021. An online survey will also be available from Wednesday 23 June to Sunday 25 July for people to share their views.  Full details on timings and instructions on how to join the events will be available on the National Trust’s website.

This is great news, of course, adding to the amenity not just of Castlefield but of the city as a whole. It’s an astute move for the National Trust as it attempts to modernise itself. On a minor note it is also very satisfying for us given this magazine’s involvement at the start.

Speaking of beginnings there are also plans for a longer “high line” at the northern end of the city centre as part of the Northern Gateway. So Manchester now looks set to gain two landscaped viaducts which is entirely appropriate. This city was, after all, the first railway city in the world so it is natural that Manchester should make valuable assets of such a rich legacy.