Why planning is political 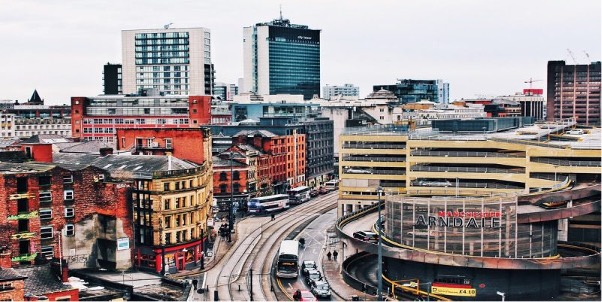 Andrea Sandor explores how community-led developments are putting democracy at the heart of the planning process. Guest article first published in Red Pepper.

At the start of this year, the UK government released a report advising local authorities to ‘bring forward democracy’. Citizen involvement comes too late in the planning process, it said, and there is ‘unacceptable uncertainty’ built into it, highlighting structural problems in the national planning process.

Six months later, however, the government appears to be rolling democracy back. In their panic to ‘build build build’ their way out of the economic crisis triggered by the pandemic, the government plans to take powers away from local authorities and cut red tape. This will likely mean residents have even less voice, with panic-built developments ignoring the needs of localities.

While there’s little doubt the planning process needs reforming and development sped up (development in the UK is particularly slow compared to other countries), cutting out civic voices is not the answer. Instead, existing examples of community-led development are already providing viable democratic alternatives to the current model.

Few places illustrate the anti-democratic nature of the current planning system better than Manchester. With a skyline dotted with glass skyscrapers of ‘luxury’ flats, apart-hotels, and offices, the council has spent decades marketing the city as an investment opportunity for national and international capital. Unsurprisingly, democracy has routinely come a distant second in this extractive and property-led urban development model.

Led by Sir Richard Leese for a quarter of a century, the overwhelmingly Labour council has developed a vision of the city centre as a place for affluent young urbanites wiling away the heady days of their youth, before decamping to the suburbs for familyhood. A recently approved planning application references this vision, saying families should look to ‘more traditional neighbourhoods in Manchester’ as their proposals are made to ‘appeal to a distinct demographic’.

Unfortunately for Manchester City Council and developers building in the city, many don’t agree with this vision. Rather than move away, people increasingly want to stay in the city centre and raise their families. They’ve become invested in where they live, and want to have a say in the future. Yet rather than starting with the wants and needs of residents, the current planning process treats democracy as an impediment to profit.

The main way residents are able to have voice in the planning process is through public consultation, a statutory responsibility of local authorities. Yet consultations are rarely more than a tickbox activity. Rather than enabling people to shape the future of their local area, developers routinely offer nearly-finished plans to residents, such that ‘consultation’ means little more than the ability to make minor tweaks. The past 18 months have provided numerous examples of just how ineffective this looks in practice.

Perhaps the most shocking case was a 2019 consultation on the widely opposed Hyde Road widening scheme. The council reclassified more than half of the negative responses as ‘neutral’, later claiming this was due to a lack of funding to address the concerns. The council then used this manipulated data to claim that only 18 per cent opposed the plans rather than 75 per cent. Meanwhile in September 2018, the developer Salboy used a consultation event to announce the next-day demolition of a historic building in a conservation area.

The council’s own scrutiny processes, which ought to guard against the worst excesses of the planning system, are equally toothless. In July 2019, a council executive rejected its own scrutiny committee’s recommendation to send a proposed development back out to consultation. Unbelievably, the executive who rejected the recommendation was the same council member overseeing the scheme. This latter episode demonstrates just how unaccountable the council’s own power structure has become.

The pandemic has only further exacerbated the situation. While council planning committees across the country began meeting and taking decisions virtually in early April, Manchester’s planning committee wasn’t scheduled to be reinstated until the end of July. The council repeatedly claimed they were not confident enough in the technology, despite this not being a barrier for other councils. In the meantime, decisions on a number of controversial developments were made by the council’s chief executive – an unelected council employee – alongside the chair and vice chair of the committee. These include developments previously rejected by the planning committee, and schemes fiercely opposed by local communities.

Planning for the worst

The UK planning process is now heading for a shake up. The government plans to fast-track development rights for converting commercial buildings and empty shops, and enable demolishing vacant residential and commercial properties without planning permission. At the time of writing in early July, it looks like this will also involve taking planning powers away from local authorities and giving them to ‘development corporations’.

The Royal Town Planning Institute has warned this could mean communities have even less say on development. Moreover, while Boris Johnson claims the planning reforms will enable faster building, Peter Apps of Inside Housing points out a report published 18 months ago by the Conservative Party showed that the UK’s slow build out is due to the homogeneity of tenure: ‘If you want faster build out, you need a blend of tenures (rental, sale, social)’, Apps explains, ‘If you try to put 100 per cent market sale on a large site, the developer can only release them at the pace the market allows’. So not only will the reforms cut out people’s voices, they’re unlikely to solve the problem they purportedly set out to address.

The government appears committed to using the ‘state of exception’ created by the current health crisis to push through further anti-democratic reforms to our planning systems. But there is another way. Examples of community-led regeneration on large sites are growing. Apart from plans for green space, these tend to include mixed-use proposals – the very kind of development that can happen more quickly – and is rooted in community-driven development.

Planning with the people

A great example is Berlin’s Haus der Statistik, a building complex that served as the headquarters of the State Central Administration for Statistics of the GDR. The building was slated for redevelopment but plans stalled, and then a group of Berlin artists staged a stunt. They hung a 10 metre poster from the seventh floor, in the style of a construction site banner, which read ‘Here Arises for Berlin: Room for Art, Culture, and Social Space’. Shortly after, the group was joined by architects, urban planners, land-use activists, arts educators, members of housing cooperatives, and advocates for the homeless and refugees; together they founded the Initiative Haus der Statistik. Nat Berg for Places Journal chronicles the whole story, but the short version is that core members of the Initiative founded a cooperative and are now an official partner in a consortium developing the site, including state-owned real estate companies and state and local government agencies. The plans include affordable housing, artist studios, education and cultural facilities, a new town hall, and council space.

In making this community led project possible, a key factor was that the local government recognised they had sold off too much public land to developers and had little space left for their own growing operations. Rather than fighting each other, the local government and community began to work together to deliver spaces both felt were needed to save Berlin’s diverse character. Since then, community engagement has been at the heart of the project.

Closer to home, a community buy-out has recently taken place in Dumfries, Scotland. The Midsteeple Quarter is a Community Benefit Society with over 400 members that is taking ownership of a group of disused buildings on the high street. The spaces will be refurbished and used as affordable enterprise space on the ground floors, with affordable housing upstairs. ‘The Oven’ is the first building to come under community control through a Community Asset Transfer agreed by the local council. Interestingly, like the House of Statistics, artists are at the centre of the project.

In a video about the initiative, Matt Baker, an artist and the project’s Strategic Director, says the failure of the town’s high street with its many closed and abandoned shops reflects ‘extreme market failure’: ‘The key thing for us is we must gather as much of that property into community ownership so that the benefits of that and the control of that is retained within our community, growing it for local people instead of just stimulating a market which is going to perpetuate that idea of extracting income through national chains’.

Planning of the Future

Back in Manchester, communities have their battles cut out for them. The city council are particularly unlikely to be interested in approaches that cut out their international partners such as the Abu Dhabi United Group. England’s legislation also gives communities fewer levers to pull. But Covid-19 has triggered a global economic crisis, and there’s good reason to believe development across the city could stall as it did after 2008. The conditions could align for community buy-outs and co-development to become a feature of our future.

Yet coordinated citizen organising needs to be met with a fundamental policy shift that positions communities as partners in shaping the future of the places they live, rather than obstacles to be overcome. The Scottish Community Empowerment Act 2015, which helped make the Midsteeple Quarter initiative possible, demonstrates that planning policy doesn’t have to be orientated towards supporting big extractive developers. However, the proposals being set out by the Conservative government threaten to further disempower and alienate communities, whilst continuing to extract wealth from our cities. As long as the Conservative government and Labour councils like Manchester remain invested in the status quo – the neoliberal development model – communities will have to fight very hard indeed for a sustainable and equitable future.