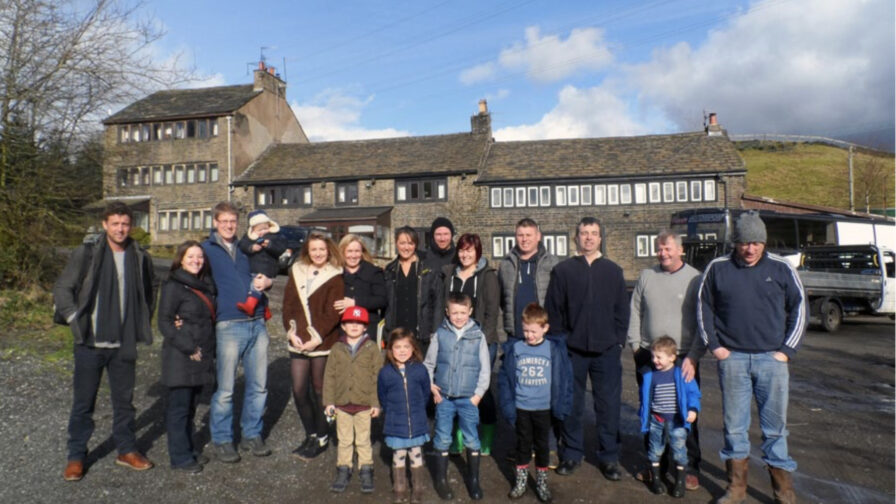 Locked out of the housing market, locals in Saddleworth set up a not-for-profit company to build beautiful bespoke affordable homes. The project shows the huge potential of community led projects to build better homes and strengthen local communities.

Nestled in the sloping green hillsides of Woodbrook valley in Saddleworth, amidst the picturesque pubs and cottages on leafy quiet country lanes, sits Laureates Places. A hamlet of nine houses, tranquility reigns here. Horses roam freely in the fields, grazing on mat moorland grass. The silence is broken only by the white noise of a stream trickling nearby.

“It doesn’t matter how busy your day has been, when you drive on to Laureates Place everything just vanishes, it’s an oasis of calm,” Melanie, one of the residents, tells me. “It gives you that feeling that you’re out of the busy life and you have this area of peace. It’s idyllic.”

Laureates Place is also full of communal spaces. There is a giant chess board where children living in the hamlet play together. “On a Friday evening in summer we put out picnic tables and eat together,” Melanie says.

This community spirit is all the more striking when one considers the residents had been total strangers when they came together in 2014 to start a not-for-profit community led housing project. “Seven of the nine households had never met,” Steve Bradley, another resident, tells me. “We really came together through desire.”

Back in 2014, all of the households had been at different places in their lives. Some were starting families, some families were growing, others were downsizing, and some people were retiring.

However, the common denominator was that they all wanted affordable homes. Some were first time buyers. Others had families which were growing and who needed more space. At the same time, the group wanted sustainable homes because they were concerned about energy prices spiralling out of control.

But finding homes in Saddleworth which were both affordable and sustainable proved elusive. “I was really disappointed with the lack of sustainability in the housing bracket I could afford,” says Melanie. And many didn’t want to relocate because they had grown up in Saddleworth or had lived there for decades. So they explored the option of building their own homes.

The problem was that none of them had enough money to buy self-build land. The price of a single self-build plot of land in Saddleworth at the time had been £325,000, whereas the average detached properties fetched £338,000.

But then a local architect, Deramore Hutchcroft, had a radical idea. He suggested the households band together and set up a company – Laureates Place Self-Build Ltd. This would enable the group to approach landowners and the local council to find an acceptable site for the build, to have a say in decisions on the design of the homes and the neighbourhood, and to be able to own and manage the site collectively. By clubbing together the group could construct affordable, custom-built homes in a neighbourhood designed by them.

Deramore identified a former breaker’s yard in the area going for £200,000, meaning each household chipped in around £27,000 – around £300,000 cheaper than if they had purchased self-build plots of land individually. Each household became a director of the company with an equal share, as well as a portion of the land on which to build their home.

Forming a company opened lots of doors for funding opportunities. The group secured £79,194.00 from the Homes and Communities Agency (HCA) for getting planning permission on the site. They also received £5,000 from UnLtd, a fund for social entrepreneurs, to pay for legal advice on what kind of company to form, like a limited company, a community interest company (CIC) or a partnership.

Another advantage of building their own homes from scratch was the occupants could design them themselves. The group worked with Deramore on the design and layout of the neighbourhood, the roads and infrastructure. They even decided that they would have their homes face away from the street, with the front looking on to green hillside views.

The Company consulted the residents of Woodbrook on their proposal. Locals could view the plans at an exhibition in the local pub, the Spinners Arms. The project was a real life example of the local community being able to provide input on development in their area.

“We could present ourselves as being anything other than profiteers,” Steve says. “We represented our own motives and gave people the chance to ask us questions. They could look us in the eye and see we weren’t in it for a quick buck.”

“That kind of consultation would never have happened if the site were being developed under the conventional model,” Deramore tells me. “Small developers don’t have the money to stage that kind of event and for them it’s all about the bottom line. With community development, of course we also didn’t have any money but we had more time. We had more opportunities to interact with locals because we were locals. That’s the difference.”

Doing the consultation in this way meant the proposal had the backing of the local community when it was submitted to the planners. 30 locals signed a petition in support of the proposal and this was submitted alongside the planning application. Deramore had also worked hard to get local councillors and MP Deborah Abrams on board, so there was support from local political figures too.

Once planning permission had been granted, the group had control over the design of the homes themselves. Beyond certain design requirements such as having green sedum roofs so that the development blended into the surrounding greenbelt, they were given free reign to appoint designers to add certain features. For instance, Steve had immense oak frames installed in his home and Melanie created an entertainment space by combining her kitchen, dining room and living room.

Undoubtedly there were challenges along the way, as some of the contractors employed to build the homes went bust halfway through construction, or families moved away from Saddleworth. “There was a lot of fluidity, mistakes and learning,” Melanie says. “But we all benefited from each others’ advice and contacts.”

However Steve says the challenges of setting up a community-led housing project were outweighed by the formation of a close community. “There was blood, sweat and tears – none of us had experience of managing a community led homes project before,” he says. “But we overcame these challenges together because we all believed in the project. We experienced the journey together and it produced a tight-knit community.”

Nowhere has this been clearer than during the coronavirus pandemic. “In many ways, we grew closer together during lockdown in spite of having to remain apart,” Melanie says. “If people ever went to the shops during lockdown, they’d ask if we needed anything,” she says. “One time I got up at the crack of dawn for a meeting and there was this van driving into Laureates Place. I sent a message to our WhatsApp group asking if anyone was expecting a delivery. It turned out a workman had just left some tools, but it was nice to be able to check in with everyone. That wouldn’t happen usually.”

The explosion of mutual aid groups we have seen during the pandemic shows the importance of co-operative structures which community led housing projects like Laureates Place create. Above all, they show how we protect the wellbeing of the most vulnerable, and engage people in concepts of solidarity and community responsibility.

It seems like the ideal way to set up a neighbourhood. “It’s been an amazing journey from not knowing people to a community where everyone matters,” Melanie says. “The project has made a group of people friends for life – and not just the people living at Laureates Place. The children on the self-build play with the kids in the adjacent cottages and they have all become friends. The project has strengthened community beyond the project itself.”Here’s to hoping we see more of these projects in Greater Manchester.