Letter: We stand with Jeremy Corbyn – just as he always stood with us

By Guest Writer | 11 December 2019Friends of The Meteor 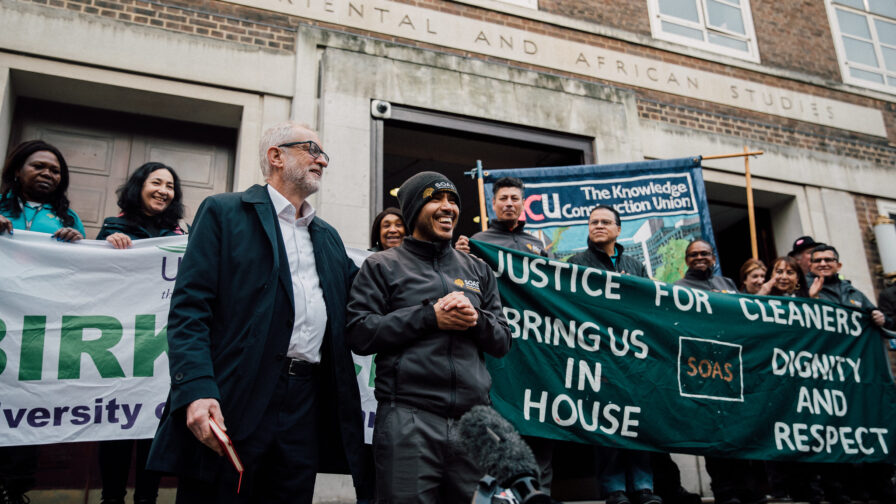 As BAME (Black, Asian and minority ethnic) representatives, organisations, anti-racist activists and individuals involved in local, national, and international campaigns, we urge BAME and migrant communities to vote for the Labour Party on 12 December, to elect Jeremy Corbyn, a long-standing friend and supporter of the anti-racist causes we campaign for.

Under Jeremy Corbyn’s leadership, the Labour Party has transformed politics in the UK, bringing hope to millions from our communities, who had previously been ignored, silenced, and oppressed by over nine years of Conservative and Liberal Democrat governments. Labour’s membership has soared since 2015, with a significant influx of BAME and migrant members. Our communities joined Labour because of Jeremy’s positions and exemplary record, over many decades, of standing beside us in our struggles against injustice and structural racism, at home and abroad. In the 2017 General Election, we turned out in record numbers to vote for Corbyn’s inclusive Labour party.

No other British politician in recent memory has been so dedicated to working with us in our communities, in order to overturn racism and achieve justice for those of us facing oppression and injustices. Jeremy’s first speech as Labour leader in 2015 was to a  “refugees welcome” rally, reflecting his longstanding commitment to achieve basic rights for migrants. Since becoming an MP in 1983, he has personally intervened on countless occasions to prevent deportations. In 2012 and 2014, Jeremy was one of only six MPs (alongside shadow cabinet members John McDonnell and Diane Abbott) that voted against the racist ‘Hostile Environment’ legislation that created the Windrush scandal, and has hurt hundreds of thousands of people in our communities.

Jeremy’s position on migrant justice is based on a true internationalism with a commitment to anti-racist and anti-colonial principles. In 1984, he was arrested protesting outside the embassy of Apartheid South Africa. In 1998, the Chilean former dictator Augusto Pinochet was arrested in London only after Corbyn supported a 25 year campaign against his fascist regime. In 2001, he publicly opposed the NATO invasion of Afghanistan.

In 2003, he spoke at the demonstration against the illegal British and American invasion of Iraq. He has always stood in solidarity with the Tamils of Sri Lanka, calling for accountability and ending the arms trade. He has spoken out against the oppression of persecuted peoples across the world, including Palestinians and Kurds in the Middle East, as well as communities in Mexico, Haiti, West Papua – often when no one else would.

Jeremy Corbyn was a key organiser in the Haringey Labour anti-racist group in the 1970s which later became the Anti-Nazi League. In 1977, he organised with the Indian Workers’ Association to turn back a violent National Front demonstration in Wood Green, North London. In 1992, Jeremy attended the inquest into the death of Leon Patterson, a young black man who died in police custody. In these ways and many more, he continues to keep police brutality against communities of colour on the political agenda, constantly tabling questions on police violence, including on Mark Duggan’s fatal shooting in 2011.

These are some of the reasons we know that Jeremy Corbyn is no ordinary politician. Each one of us, as individuals and organisations, have memories of Jeremy attending our events and demonstrations, large and small, championing our causes, and being our voice in Parliament – standing with us when we were dismissed and ignored.

In government he pledges to close detention centres, oppose imperial wars that have killed millions, and dismantle the Conservatives’ Hostile Environment policies, which criminalise our communities, and have led to the deaths of so many.

The Conservative government’s negligence allowed our brothers and sisters to die in the fatal fire at Grenfell Tower and has deported British citizens for the crime of being black during the Windrush scandal. We cannot continue like this: we must have a Labour victory in the upcoming election. We urgently need it.

Jeremy Corbyn will be the United Kingdom’s first anti-racist Prime Minister. We call on all of you, BAME and migrant communities to mobilise everyone you know, and ensure we get Labour elected on December 12. At this critical moment of possibility, and the chance for change, we stand with Jeremy Corbyn – just as he has always stood with us.

Labour Against Racism and Fascism (LARAF)

Women of Colour in the Global Women’s Strike

Crissie Richter – Women of Colour in the Global Women’s Strike

Sara Callway – Women of Colour in the Global Women’s Strike