By Guest Writer | October 2, 2019Friends of The Meteor 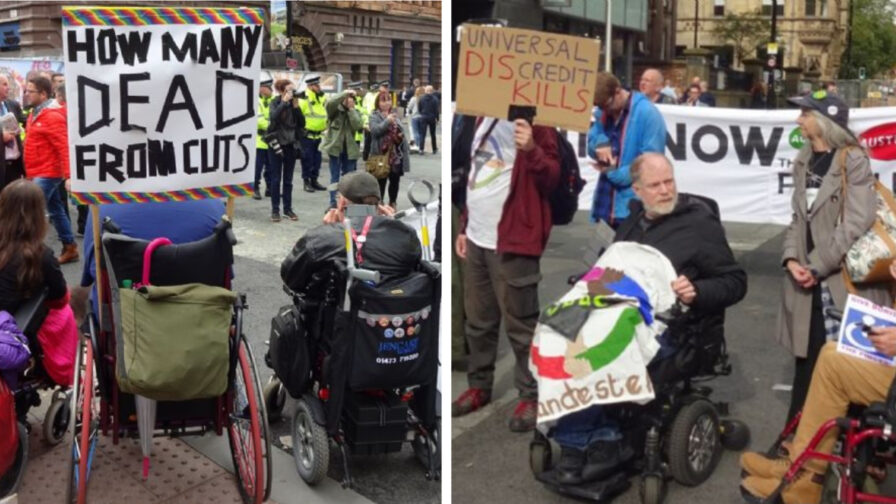 “You are responsible for mass suffering and mass deaths and we will not let you forget it”.

Said a speaker at the Disabled People Against Cuts protest outside the Conservative Party Conference in Manchester, with each speaker telling personal stories of suffering and neglect by the system.

Also protesting this  on an array of issues were a badger, a tree, a white elephant and silent Quakers.

Said another speaker at the Disabled People Against Cuts, or DPAC, protest outside the Tory Party Conference on Monday afternoon, and every speaker had a personal horror story to tell the delegates, most of whom smugly walked by.

“We have a social security system in this country that promised me that it would look after me from the cradle to the grave, and I worked to the age of 38 when I broke my spine” said one speaker “I returned to work and managed to work for four years until the system changed.

“Access to Work was cut, and if you could stand up and were breathing you were no longer entitled to disability benefits” she added “I have watched the social security system turn out to be something that I am eternally ashamed of.

“Thousands of disabled people are so frightened of the work capability assessments… it’s nothing to do with capability to work, it’s to frighten and humiliate you and we’re sick of it” she explained “Any one of us could become sick or disabled. Think of all that tax that you’re paying, or all that tax that I paid and my family paid. And now, when I walk into those offices I’m labelled a skiver and a scrounger; that’s why we’re here today.”

The sentiments were underlined by other speakers…”You’ve cut the funding to specialised schools and colleges, and when we get out of school and maybe get to university and we get £150,000 worth of debt you don’t class us as unemployed you class us as ‘economically inactive’ to help your unemployment figures” said an angry young disabled person.

“You say these changes are meant to support us, yet the numbers show you’re full of shit” he added “Why have you created more suffering? Why are we the first country in the entire world to be condemned by the United Nations for going back on disabled people’s rights; ‘grave and systemic’, to quote. We don’t want you in Manchester, we don’t want you in Government…piss off…”

The United Nations reports on disabled people came up again and again in speeches… “They know the UN has given two really clear and well researched and indisputable reports that show that disabled people in this country are being really badly demonised and persecuted by this awful Government” said another speaker.

“How many have died as a result of the cuts? How many people are stuck in their house unable to leave the front door because they haven’t got the adaptations and support that they need to do so?” he asked “It is an utter disgrace. No Tories can be under any illusions of the negative affect of their policies on those in society that can least afford them…They are openly breeding and causing a hostile environment for disabled people.

Another speaker linked everything…”The biggest handout in history was to the bankers” he said, adding that “We’ve had the Bedroom Tax, the PIP, benefit sanctions…we’ve had enough of being frightened…Boris Johnson is the enemy of the disabled and every working class person in this country…”

Also protesting at the Tory Party Conference this morning was a badger, stressing that 150,000 badgers will have been culled under this Government; and a white elephant plus a tree protesting about HS2…with leaflets pointing out the £56billion cost, the ‘irreversible damage to the environment’ and the fact that it ‘won’t bring the promised benefits to the North’…

Meanwhile, outside Friends Meeting House in the shadow of Manchester Central, the Quakers held their own silent protest… “We stand here in peaceful silence to remind our politicians of the climate emergency because we want them to safeguard the future of our planet”, their leaflet stated.