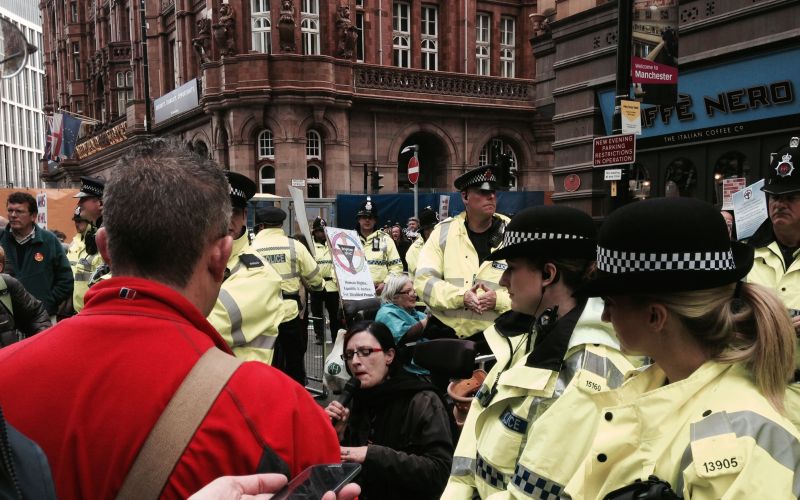 Greater Manchester Police (GMP) has admitted that it has a written agreement to share information about disabled people and other activists who take part in protests with the Department for Work and Pensions (DWP).

Disabled activists have expressed alarm at the confirmation, which came despite previous denials by the force and DWP that any such agreement existed.

They said the existence of the agreement was a clear blow to the right to protest of disabled people who claim benefits.

Greater Manchester Coalition of Disabled People (GMCDP) said it was “extremely concerned” that its local police force was “spying on disabled protesters and passing on their details onto the DWP”.

GMCDP said the agreement was “yet another example of the punitive and unwarranted targeting of disabled people”.

Concerns about links between DWP and police forces such as GMP – and the impact on disabled people’s right to protest – first emerged last December after Disability News Service (DNS) reported that forces had been targeting disabled protesters taking part in peaceful anti-fracking protests across England.

Lancashire police then admitted in December that it had shared both information and video footage of disabled anti-fracking protesters with DWP, in an apparent attempt to have their disability benefits removed.

Greater Manchester Police then told DNS that it had passed DWP information about protesters taking part in anti-fracking protests at Barton Moss, Salford, which took place in 2013 and 2014, and also confirmed that it had shared information with DWP from protests not connected with fracking.

This raised concerns that it might have passed information to DWP about disabled people who protested in Manchester about the government’s austerity-related social security reforms, particularly during high-profile actions around the Conservative party conferences in 2015 and 2017.

GMP later claimed that it had not shared any information with DWP about disabled activists who had taken part in the 2015 and 2017 protests.

The Conservative party is returning to Manchester for its annual conference in October.

GMP has previously denied – in response to a freedom of information request – having a written agreement to share data with DWP, while DWP has said repeatedly that it has no such “formal arrangement” with GMP or any other force.

GMP’s press office had initially suggested that it did have an agreement with DWP, before later denying there was one.

Labour’s deputy mayor for policing for Greater Manchester, Baroness [Bev] Hughes, told DNS in February that she had “consulted with senior officers within GMP who have assured me that there is no formal ‘sharing agreement’ in place, and that the police act on a case by case basis, sharing information in accordance with the Data Protection Act”.

But after DNS submitted a second freedom of information request to the force, a member of its information management team confirmed that there was such an agreement.

After DNS asked if GMP had an agreement to share information from various protests with DWP, he said he had “located a multi-agency agreement to which DWP are one of many partners”, but he said this had “not yet been assessed for disclosure to you”.

He said that most of the agreement “relates to controls/rules partners must adhere to when handling information”.

He later told DNS, on 17 April, that he had “identified the area of the force that is responsible for the sharing agreement” and had “posed your question to them, and am awaiting a reply”.

The force failed to respond to further emails – which appears to have been a breach of the Freedom of Information Act – until this week.

But yesterday (Wednesday), a member of GMP’s information management team said he would “risk assess the agreement next week for disclosure” to DNS.

The force’s press office refused to comment this week or to explain why it had previously claimed there was no such agreement.

Brian Hilton, GMCDP’s digital campaigns officer, said the coalition was “extremely concerned that our local police force is spying on disabled protesters and passing on their details onto the DWP”.

He said: “This is worrying on so many levels. Disabled people in Greater Manchester have always protested against injustice, whether this be campaigning for our own rights or in support of others.

“This news sends a clear message that disabled people should think carefully before they take to the streets and exercise their legitimate right to protest.”

He added: “Are we now saying if you can protest you should not be in receipt of benefits?

“Should disabled people stay locked inside their homes in case they are sanctioned?

“What’s next? Are the police going to run undercover operations at festivals to see if disabled people are brazen enough to sway in time to the music or, god forbid, dance?”

Hilton said repeated studies had shown there was “no epidemic of fraudulent [benefit] claims”, and that the force’s agreement with DWP was “yet another example of the punitive and unwarranted targeting of disabled people”.

Dennis Queen, from the Manchester branch of Disabled People Against Cuts (DPAC), said: “We would like to see this ‘multi-agency agreement’ to which DWP are one of many partners, because the agreement means conditions are effectively being imposed that disabled people have no idea about, they cannot bear them in mind, make informed consent, and so on.

“This sounds like a breach of our rights to engage in political protest to me.”

Queen said concerns about the agreement would have “a directly chilling effect on people’s ability to stick up for their rights and join in campaigns, both relating to disability and not.

“Given my own arrest for an offence I did not commit during [a Tory] conference this is a personal concern too.”

In 2017, disabled activists from the Disabled People’s Direct Action Network (DAN) and DPAC criticised “heavy-handed” police tactics at a direct action protest that blocked tram lines outside the conference.

Queen was arrested for public disorder but was later found not guilty.

She said: “Have I been reported to the DWP? Do the police now have a right to find out if I am a client of theirs?

“What other private information are they privy to? Did the police update them that I wasn’t guilty of the charges?”

First published in the Disability News Service  on 25 July 2019