Peterloo and Protest at the People’s History Museum 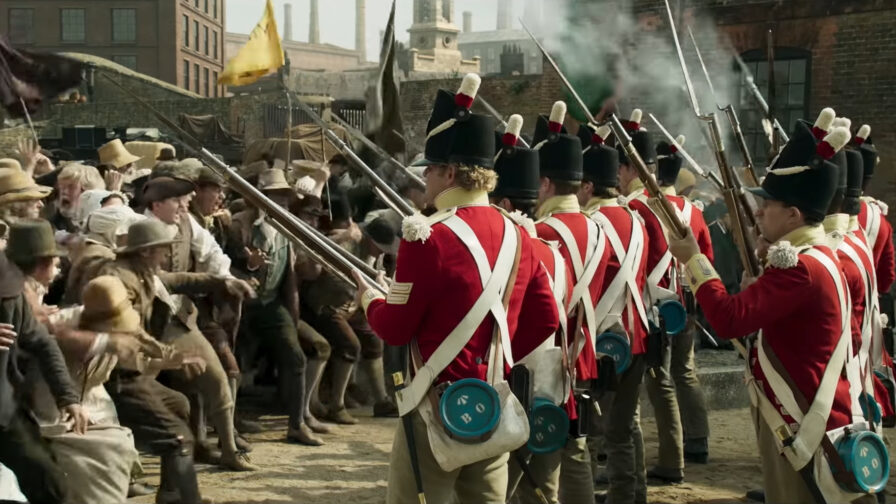 A new exhibition opened last Saturday at the People’s History Museum in Manchester to mark two hundred years since the Peterloo Massacre. Featuring artefacts never displayed before, as well as a short film giving the whole history, Peterloo is brought up to date with a Protest Lab, where people from Salford and beyond can put their campaigns on a giant map, as well as submitting photos of their protest.

As the 200th anniversary of the Peterloo Massacre approaches there’s loads of events, books and happenings but a new exhibition that opened yesterday at the People’s History Museum, called Disrupt? Peterloo and Protest, is aiming to bring it all up to date with a Protest Lab and lots more.

For anyone who still doesn’t know what the Peterloo Massacre is, it happened on 16 August 1819 when 60,000 people met at St Peter’s Field in Manchester to demand basic democratic rights. They were met by cavalry charges, resulting in 18 protesters dead and many hundreds more injured. The exhibition labels it as ‘the day blood ran in the streets of Manchester’.

“We wanted the exhibition to be a starting point to really raise the awareness of Peterloo across Greater Manchester” explains Jenny Mabbott, Head of Collections and Engagement at People’s History Museum “And every object has a really powerful story behind it.”

While the Museum has a permanent display on Peterloo upstairs in its main gallery, including two swords probably used in the massacre, this year long exhibition features newly acquired and loaned artefacts, some of which have never been displayed before.

They include a cartoon done just before Peterloo by George Cruikshank, called Universal Suffrage or the Scum Uppermost…”It shows the working classes, who wanted reform, as a many headed monster sitting on the institutions of royalty and the arts; a monstrous thing to be avoided!” says Jenny “But Cruikshank only initialled it and didn’t sign it, showing that it was his patron’s perspective rather than his own. He also did cartoons in favour of reform.”

There’s a bright glass painting, based on a print by Richard Carlisle, made soon after Peterloo, that’s been restored; a very rare Peterloo commemorative coin, and an oil-painted portrait of Hugh Hornby Birley, captain of the Manchester and Salford Yeomanry, who gave the orders for the local government forces to attack the crowds and then participated in the slaughter…

“It was donated by his family who are now under no illusions that he was the baddie of the story” Jenny explains “It’s an ornate painting, and you don’t have that of the ordinary people who were there and who were killed but it’s important to show that story. Afterwards he was put on trial but acquitted for his actions, his fees were paid by the Government and he was actually celebrated.”

In contrast to Birley, there is Mrs Mabbott’s dress on display, loaned from Manchester Art Gallery. She was a sweet shop owner from Shude Hill, and while she didn’t take part in the protest she was caught up in the chaos as it spread beyond St Peter’s Field

“We’ve also used it illustrate what women would have been wearing on the day and how they were targeted” says Jenny “Woman made up about twelve per cent of those present but twenty five per cent of the casualties. Their dress was restrictive.”

Hanging in a blue glass case in the gallery is the Skelmanthorpe flag, with slogans like; ‘Nay never a cock in England crow/Nor never a pipe in Scotland blow/Nor never a harp in Ireland play/Till liberty regains her sway…’; while there’s a satirical pamphlet titled A Slap at Slop from 1821, featuring another cartoon by Cruikshank showing an ironic take on Peterloo via a mythical memorial to the cavalry with sabres drawn…

“We’ve used this to show the role of the radical press and how, for example, the Manchester Guardian was formed in 1821” Jenny explains “There was lots of repression after the Peterloo Massacre but also lots of new ways to get the messages out….”

And, at the end of the displays, there’s the first secret ballot box, used at a Pontefract by-election in 1872, when one of the demands of Peterloo was finally put into practice… “It’s got a liquorice seal on it which is what they use to make Pontefract cakes, which is really nice” says Jenny “We wanted to show that it took until 1872 for it to happen but it doesn’t mean it wasn’t worth campaigning for. Change can take time.”

Salford shouldn’t have a problem here, with the Saving Our Neighbourhood, Save Our Duncan Matheson Playing Fields, Stop The A666 Bus Lane Madness, Cadishead and Irlam Save The Green Belt, plus the Saving People Shelter in Eccles and loads more currently kicking off, as well as wider anti-cuts and anti-racism campaigns.

Campaigns or individuals can also submit photos of protest by email – disrupt@phm.org.uk or via Twitter #myprotestPHM – which will be shown at the exhibition; while objects symbolising protest can be dropped off for display – these could be anything from badges to placards, or something more personal. Jenny herself has added a reusable coffee cup that she asks shops to fill, rather than choking the planet with one-off cups. Another member of staff has added a lipstick she uses on protests for ’empowerment’ – for range of drop-off days click here.

The idea is that the whole interactive space will become full and alive as the exhibition progresses throughout the year.

The whole thing is tied together with a short film, including extracts from Mike Leigh’s Peterloo and contributions from Maxine Peake, Krishnan Guru-Murthy, Angela Rayner MP and Greater Manchester Police Chief Inspector Tariq Butt arguing that policing of protest has changed since the St Peter’s Field slaughter. The film takes viewers through the story of Peterloo and brings it up to date, fitting the theme of The Past, Present and Future of Protest.

Free with a suggested donation of £5

To go with the exhibition, there’s a year-long programme of events. To find out more details on everything that is happening – click here