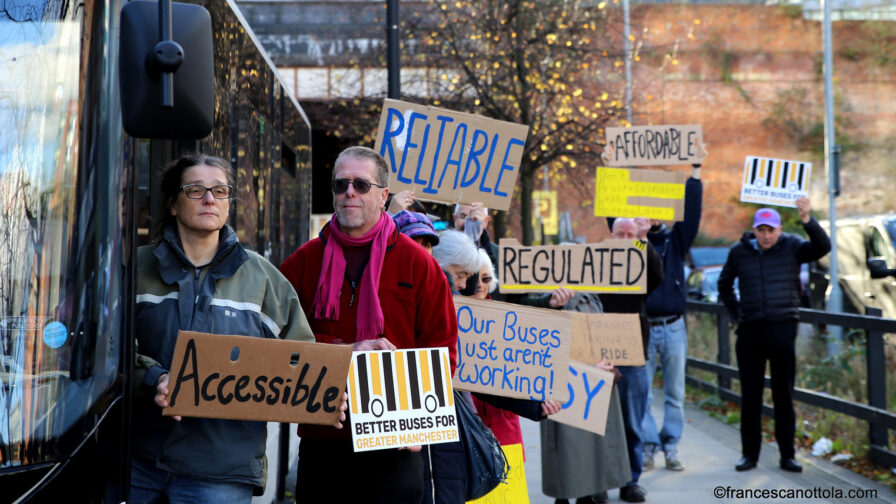 Campaign group Better Buses for Greater Manchester has organised a public meeting for next week, calling for GM Mayor Andy Burnham to choose a London-style system of publicly controlled regulated buses. The meeting is on
Wednesday 6 February, 6:30pm-8:30pm, at the Manchester Art Gallery.

Last week, Salford councillor Roger Jones estimated that, even if Greater Manchester Mayor, Andy Burnham, chose to regulate the region’s buses, it would take between “two to three years”.

If Burnham did re-regulate the buses it would give local authorities more control over fares, routes and timetables, as well the ability to bring in a simple smart card which automatically caps spending like London’s Oyster card.

So far, the process has been painfully slow with Burnham having to choose at some point between re-regulation and a ‘partnership’ model with the current bus operators. Both sides are intensifying their PR campaigns, with the bus companies’ One Bus launch last week pledging 450 new buses, a simplified ticket system and two year price freeze, plus a ‘review’ of the bus network in a £100million process.

The campaign group Better Buses for Greater Manchester has trashed this idea, arguing that an average of £18.4million is pocketed by shareholders every year, calling for Burnham to “take a stand for our buses and fight the fat cats who profit from our unreliable, expensive, disjointed bus services”.

“The de-regulated system we currently have means the bus companies just cherry-picking the profitable routes and charging what they like, making a killing” says Pascale Robinson, of Better Buses for Greater Manchester.

“It’s us as passengers and staff in Greater Manchester who suffer from infrequent, unreliable and expensive buses” she adds “London’s regulated network outperforms ours on almost every front. We’re calling on Mr Burnham to be bold, to give us the bus network we deserve and to regulate buses”.

There is still no Parliamentary Order in place, transferring transport powers to the GM Mayor, although this is expected during the current financial year. Last week, to finance the bus stuff, the Greater Manchester Combined Authority (GMCA) approved an extra £9 on everyone’s Council Tax bill “for other Mayoral General functions, specifically bus reform”.

A total of £8.3million will be given over to Bus Reform and the new 16-18 Opportunity Pass two-year pilot, which will provide free bus travel to all 16 to 18 year olds in Greater Manchester from September this year.

In the long term, some sort of bus reform is coming, either re-regulation or a ‘partnership’, and Better Buses for Greater Manchester is pressing for the former system. The public meeting next week is another salvo in that campaign…

First published in the Salford Star on 28 January 2018

Better Buses for Greater Manchester also has an ongoing petition with over 8,000 signatures calling for Burnham to ‘regulate our buses’ – to sign it – click here