Man given eight-month sanction for missing an appointment. Can we please stop sanctioning people? 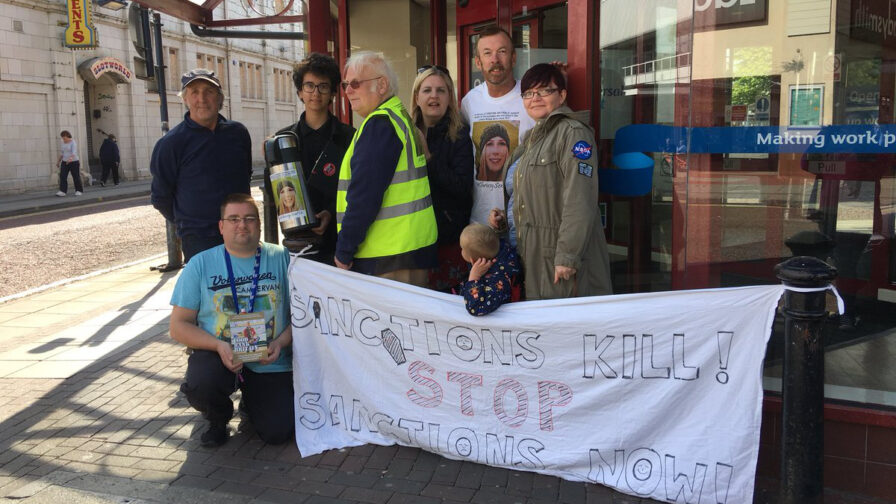 As you may have heard Esther Mcvey has resigned from her role as the DWP minister because she doesn’t agree with the deal put forward by Theresa May, she actually stated that she wouldn’t be able to look her constituents in the eye. I found this quite hypocritical because she has no problem looking in the eyes of the disabled, poor, working poor and the families of those who have died as a result of her cruel decisions whilst in office.

Don’t celebrate yet because she’ll be back, she’s done this before, and anyway, they’ll replace her with someone equally as odious and stone-hearted. We shouldn’t start celebrating until we have a general election and Labour win, and if this happened it’d take us years to repair the damage.

Anyway, the blogs late because I had to go to Salford Quays to be interviewed by Granada news regarding this. So please accept my apologies.

Once again can I remind people that we handed out five food parcels, we helped and advised everyone that we spoke to and signposted everyone that needed to be signposted. We also act as an impromptu councilling group and we offer advice concerning other matters also.

The campaign doesn’t end at 12pm on Thursday, for me, it lasts for seven days a week.

Yesterday was a little warmer even though it was dull. armed with a cup of decaf I walked over to the Jobcentre. I was greeted by a woman who we’ve been helping for a while now. She’s a shy woman and yesterday we had a breakthrough, she opened up about her situation and we can now help her further.

Due to circumstances out of her control, she’s had to make changes to her claim for universal credit and as a result, she’s not going to receive any payments so I handed her a food parcel.

It’s so sad to see someone that’s desperately trying to improve her situation being pushed further down into poverty. This won’t enrich her life, it’ll make life much harder for her and to be honest I’m worried about her.

I spotted a lady walking out of the Jobcentre with two small children, one in a pram. She told me that she’s had to make a new claim for universal credit and she has been forced to take a loan from the DWP to survive.

It shouldn’t be like this, children shouldn’t be forced by the government to go hungry, not to forget their mother will be hungry and no doubt their health will suffer. It takes a government of psychopaths to inflict cruelty such as this.

A woman stopped Gordon and she explained her situation, which unfortunately isn’t uncommon. Her situation is this. She’s currently claiming JSA and has been offered a job. Brilliant you might say, and it is, however, there’s a problem. Her job is a part-time position and it would take her over the threshold that’s allowed when claiming JSA, she’d have to move over to universal credit and the thought of this scares her.

She knows that she’ll have to go without any payments for at least five weeks, she knows that the conditions of universal credit would damage her both physically and mentally. Basically, she’s scared.

We had a chat and we’re hoping that her situation has been rectified, but once again it shouldn’t be like this. Making a claim for universal credit feels like you’re being punished, and it’s a fact, to be honest. We’re being punished for being poor, for needing help and it’s cruel and unnecessary.

I was stopped by a man that myself and the law centre have been helping told me that his mandatory consideration. He’s beginning to gain confidence, mainly because he knows that he’s being supported, listened to, understood and respected. Being cruel certainly doesn’t encourage people does it.

We noticed a man walking around confused. He’d been told that he needs to provide proof of his address. Simple you might think, but it isn’t for many. People move homes, are homeless, have had to leave a property in a rush and are staying in temporary accommodation. Some people have chaotic lives, but it doesn’t mean that they should be punished for this, unfortunately, they are. There’s a massive lack of understanding not only from within the DWP but in all governmental and local governmental departments. Often the receptionists at these places can appear uncaring which doesn’t help.

Gordon and myself were stopped by a woman who I shall name Dot.

Dot is an older lady, her husband died in March and Dot is still grieving. She’s depressed and is finding life very difficult.

Dot is claiming the sickness (ESA) related element of universal credit and she’s struggling. She’s constantly worried and she’s being reminded that she’ll soon have to return to work. Dot should be allowed to recover and grieve, but there’s no way that the DWP will allow this.

Dot’s future doesn’t look good thanks to this government.

I spoke to a man whom I shall name Jim.

Jim walked out of the Jobcentre looking confused, he’s an older chap.

Jim had spent three days trying to make an online claim for universal credit. Three days folks, because he was struggling with the system. In his words, he ‘doesn’t get along’ with computers and he was constantly being thrown off the website for one reason or another.

You can see why Jim is confused, can’t you? I can. Honestly how hard is it to ensure that you give the correct advice? Impossible I fear. Does the DWP care about Jim? Not one bit.

I was stopped by a woman, she had been made redundant. She was told to go to the Jobcentre to start her universal credit claim. Simple you’d think. Nope. She told me that she was being sent to a different building to make her claim.

A rather frustrated man stormed out of the Jobcentre, he shouted ‘Theresa May is an old bag, shes horrible’. It’s hard to disagree with that, isn’t it?

I had a brief conversation with a man who told me that he’d been sanctioned for eight months. Yes, eight months. His reason for missing his appointment was that he had to help his father move into a nursing home out of the area. He provided evidence of this, he appealed and they refused his appeal. So he went without money for eight months.

I advised him on what he should do, but you might ask how does someone survive for eight months with no income. To put it bluntly many don’t. Many die, most are hungry and many lose their homes.

Sanctions and universal credit are two of the main reasons why people become homeless, but many are forgetting about sanctions and their impact on people, just like they are forgetting about the two-child limit, the benefit cap, the bedroom tax and the council tax supplement. I often feel that I’m a lone voice when talking about these issues because some have forgotten about them, many have accepted it as the norm.

I then had a conversation with a Kurdish man who had been temporarily employed by an agency. He didn’t understand that he had to make a new claim for universal credit and would have to wait for around five weeks or more for his claim to be processed.

The system is too complicated, it makes you financially worse off, combine this with a limited understanding of the English language and you’re certain to fail. Can I say that I hate this government?

Last but not least, I spoke to a woman who I shall name Jenny.

We advised Jenny but for her and people like her, their future is very bleak. It’s ok for local governments and organisations to provide internet access locally, but it’s completely useless for someone without a computer, who doesn’t know how to use a computer and can’t afford one also. We need a paper system, one that everyone understands and we should also be campaigning for this.

This all happened over two hours and we do this every week. We work hard helping people in cold and often with abuse from passers-by. I can’t thank everyone that comes along to help enough. You’re all amazing, you keep me going especially when I feel fed up like I do now. The work that we do is much needed and has become essential.

We’ll be back next week and every week.

Feature image: The Poor Side of Life