By Guest Writer | 7 April 2018Friends of The Meteor 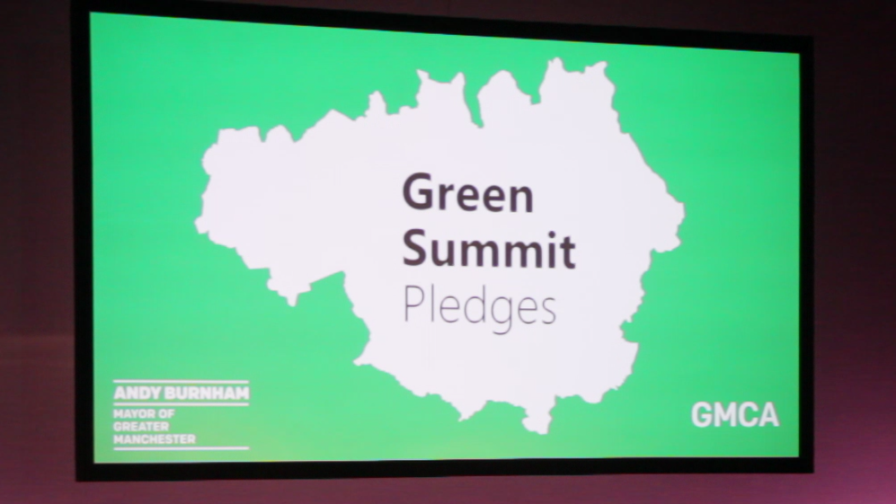 I attended the Greater Manchester Mayor’s Green City Summit on 21 March: here is a quick review.  The event was, as you’d expect, a mixed bag, with good and bad aspects. It is too soon to make an assessment but here, from a Viable Economy perspective, are the important points.

The key question: can Greater Manchester keep within the carbon budget?

During his campaign for mayor last year, Andy Burnham had pledged to hold this high profile event, bringing together stakeholders and experts to see how the city region’s ambition to tackle climate change and other environmental issues could be improved. This was him keeping that promise. Our city is fortunate to have leading climate scientists working here at the University of Manchester’s Tyndall Centre, and their input had been commissioned prior to the event. The result was the SCATTER framework, developed with Anthesis Group, the BEIS and the Core Cities network. Anthesis describes the tool:

“Today sees the launch of a UK city-focused low carbon pathway model, SCATTER (Setting City Area Targets and Trajectories for Emissions Reduction). It provides a tool to support cities across the UK to set emission reduction targets and define appropriate pathways to achieve them. The implementation of the model has been piloted by Greater Manchester and will support their vision to develop an ambitious science-based carbon reduction target as part of becoming a leading green city.”
I took away a leaflet to take a closer look but on getting home I was disappointed to find there was no weblink to explore the data further. The Anthesis site, at least as yet, lacks any link to the tool itself, and the data from it. Will this tool be made available to Greater Manchester citizens and organisations? Kevin Anderson, from the Tyndall centre gave a keynote which pulled no punches. He explained the concept of carbon budgets – the amount of greenhouse gases (measured in carbon dioxide equivalent) that it is possible to emit. He reminded us that we have no more than 4 or 5 years (globally) of emissions left for a better than evens chance of keeping global warming to 1.5 degrees (see the data HERE).

As yet (when taking imports, shipping and aviation into account) there has been no significant reduction in the UK’s emissions. It is the cumulative emissions that count, and I will return to this point. See the Tyndall Centre’s Report: Quantifying the implications of the Paris Agreement for Greater Manchester. Kevin also identified a number of radical actions that need to be taken, with the emphasis on the those who emit most: In addition to leaving most fossil fuels in the ground (and hence no fracking and the need for our organisations to divest from fossil fuel companies) these emphasised what Greater Manchester institutions and people need to do, including,

These are eminently do-able actions. Kevin was followed by Alex Ganotis, leader of Stockport council and Greater Manchester Combined Authority lead on climate change and environment. Alex introduced the SCATTER scenarios. Various interventions and scenarios have been modelled but none of them get us to zero emissions in time (that is by 2040 – the accelerated time scale that was adopted at the event). But it’s worse than that because they all reduce emissions too slowly: the cumulative emissions in the early years will blow the city region’s share of the carbon budget. As Kevin made clear (quoting fellow scientist, Alex Steffen), in the case of climate change, “winning slowly is basically the same thing as losing outright”.

It’s the area under the curve that counts, and as you can see, all the scenarios (the thin lines on the graph) bound a bigger area than the (mauve/grey) carbon budget.”

I am far from confident that this issue was recognised by more than a few of the people at the event: it means that early emissions reduction must be considerably ramped up, and Andy and Alex (Ganotis), you can’t do that while you are growing the economy. If you want to expand certain sectors (for example clean energy) then you also have to specify which sectors you will freeze and which you will contract: it’s a finite world and we’ve hit the walls. Yet, used properly, and critically, in coming months, the SCATTER methodology could help sort out the harsh reality from the self congratulation. An example of how to ramp up the emissions reductions, noted by one of the speakers, was rather than replacing domestic boilers with more efficient gas ones, to go to lower carbon options such as heat pumps or combined heat and power units – one example where technological innovation can really help. Another option would be what some of us called for nine years ago, to first cap airport expansion and then to implement a managed reduction in aviation: certainly challenging given the local authorities dependence on dividend from the airport which they partly own – but you just can’t fudge these issues.

It is worth quoting in full the proposals “on the table” at the summit:

Andy Burnham also gave a welcome nod in the direction of the Fossil Free Greater Manchester campaign for the GM Pension Fund (still the dirtiest in the country) to divest from its fossil fuel holdings: “We need to look at the Pension Fund” he said.  (We might note that Sadiq Khan has now made a strong commitment to fossil fuel divestment on the part of the London Assembly and promised to campaign for the other London authorities to follow suit).

At the end of the summit it remained unclear to me which had been adopted and what the process for their development and implementation will be from now. The Mayor and Combined Authority can only do so much, being dependent on central government and other actors in this city and beyond, but the intention to quicken the pace of change and to facilitate the actions of others is very much to be welcomed.

A further initiative announced was to be the “first UK city-region to ditch single-use plastics”. This may be a little exaggerated: what has been launched is a pledge from the hotel and catering industry:

“Greater Manchester’s tourism and hospitality sector will aim to eradicate the use of single use plastics by 2020.  Within the next 6 months, local businesses will set out a plan to achieve this and, as a first step, have begun to replace plastic straws with more sustainable alternatives. This is part of a wider scheme to make our industry more sustainable.”
As of 24 March, 24 businesses had signed up. This is good, and could help bring about a wider change. Plastic not only pollutes but is overwhelmingly based on the pertochemical industry: when burnt, plastic contributes to carbon emissions, while exerting a demand pull on fossil fuel exploitation. Other campaigns are focusing on non-returnable bottles (in the 1970s, as a student, the first environment campaigns I was involved in, against Schweppes and Tesco, were on this question, when single trip containers were a new thing) and on the use of plastics by fast food outlets.

Unfortunately, the initiative was fronted by Gary Neville, a property developer responsible for the St Michaels and Turn Moss plans. The former is an out of scale, city centre development that threatens liveability and heritage resources (even with the revisions following the first wave of objections) and like other city centre developments, has evaded the affordable housing requirement. The latter will fence off and build on green fields in the Mersey Valley. Neville’s invitation to the all male closing platform (where he winged about costs of sustainable initiatives) was a monumental misjudgement that undermined Burnham’s otherwise commendable initiative. The question of Green Space also raises the question of how the Green City initiative links with other GMCA and Mayoral initiatives and plans, including the Spatial Framework (to be relaunched in July, after Burnham’s demand for a “radical rewrite”, with a three month consultation), the Town Centres Challenge, and the overall GM Strategy.

In the context of commercial interests often undermining environmental and climate initiatives, it was refreshing to learn about some good work by large organisations. There was a lot on display, and I did not get around everything. Inevitably there was some greenwashing: the airport was there showing how incredibly sustainable their operation is (sic). To illustrate the better work, here are two. The GM Fire and Rescue Service is getting on with some really worthwhile things: with reductions in carbon footprint, water use, pollution and resource (fuel and materials) inputs. United Utilities has a number of initiatives from covering clean energy, water catchment and flood management, and water conservation and resilience building.

Andy Burnham announced a follow up event at which more concrete plans will be shared and feedback given. It would be worth making every effort to make the event truly participative: last week’s summit was far too passive, with the audience sitting for hours being lectured. While there is room for some scene setting and presentation of options and proposals to a large audience, much more can be done to engage the interested and committed audience, using a host of large group facilitation and deliberative methods.  There had been a lot of participative events prior to the day – it is a shame that this approach was not consolidated at the summit itself: there was no attempt even to get audience feedback on the proposals on the table! There are also plans for a People’s Green Summit, probably in June, to bring the “movement” together with a shared understanding of what we should be campaigning for, to “encourage” the GMCA and other stakeholders to confront the really burning (literally) issues. Watch our events calendar for an announcement.

You can read the official announcements from the Summit here.
Phil Korbel from the Carbon Literacy Project has written a personal reflection on the summit.  It is worth a look, not least because of its insight into some of the political barriers faced in getting commitment to ambitious targets.
Feature image: Twitter