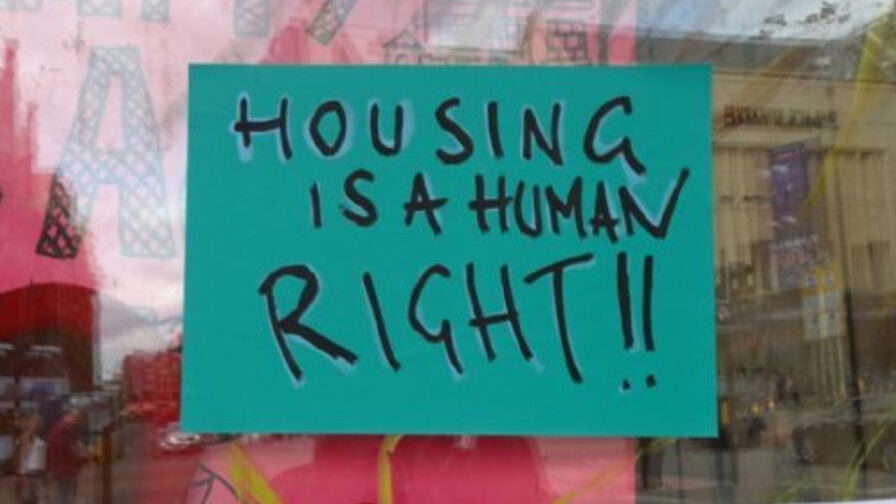 As the Homelessness Reduction Act kicks in this month, Salford City Council is about to publish its new 44-page Homeless Strategy which reveals shocking and staggering levels of homelessness in the city.

Included in the report is the fact that Salford has a higher level of rough sleeping than Manchester; that the main cause of loss of settled accommodation is violence (up 66%), and that most people presenting as homeless are under 35. What’s the Council going to do about it all?

More ‘visions’, more ‘strategies’, more ‘monitoring groups’ and ‘partnerships’… Salford City Council is about to publish its new Homeless Strategy, as the Homelessness Reduction Act comes into force this month.

Buried within the 44 page ‘Strategy’ are staggering statistics about homelessness and its causes within the city – which are a shocking indictment, not just of failed Government and Salford Council policies but also of society in general.

Salford, relatively, now has a higher level of rough sleeping than Manchester, which at the last count numbered 49, up 600% in the last five years. While this is the second highest number in Greater Manchester, in terms of numbers per 1,000 households it’s actually higher than Manchester and joint highest with Tameside.

Meanwhile, over the last five years, homeless acceptances rose by 95%, compared to a 43% rise in Greater Manchester as a whole and a 33% rise across the North West. Last year, 471 individuals and households were accepted as homeless and in priority need in Salford.

Last year, there was also a 201% increase in households placed in bed and breakfast accommodation, while over the last five years the use of temporary accommodation has increased by 102%.

The Strategy cites the main cause for the loss of settled accommodation is not rent or mortgage arrears (that’s second) but violence, the rate of which has increased by 66% over the last five years. And families and relatives are reluctant to help out, with this ‘reluctance’ increasing by 110%.

Most Salford people (60%) presenting as homeless are under 35, over half of whom are single, and thus not ‘priority need’. Only 41% of these are ‘accepted’ as homeless by the Council.

The massive problems are compounded by the absolute shortage of affordable housing. Even getting on the housing ladder at all is becoming tougher, with average house prices in Salford increasing by 16% over the last five years – from £131,419 to £152,579.

Underpinning this is an annual shortfall of 760 affordable properties. And the Strategy notes what everyone in the city already knows… “It is recognised that most of the new build growth caters for the medium and higher end markets but vulnerable households are also becoming more reliant on the lower end of the private rented market due to the limited supply of social and affordable housing…”

All this is happening while Salford is undergoing its biggest property boom for years. 17,723 properties are currently in the city’s planning pipeline, with 40% of those developed for the Private Rented Sector. According to the Council, only 3,500 ‘affordable homes’ are to be delivered by 2021, and nowhere does it define ‘affordable’ – are they social rent, affordable rent, ‘intermediate houses’? It doesn’t say.

Also, nowhere in the ‘Strategy’ does Salford Council admit its own failings that have contributed to the housing crisis – the bulldozing of hundreds and hundreds of real affordable houses, to make way for over-expensive market houses to attract ‘young professionals’. Plus its own SPD planning policies that have let developers avoid contributing thousands of affordable houses, via Section 106 (see a zillion previous Salford Star articles).

It’s all led to a perfect storm of a housing and homelessness mess that is only just beginning, with the massive elephant of Universal Credit about to enter even more rooms…as housing benefits go directly to claimants rather than landlords.

So what are Salford Council and Salford City Mayor, Paul Dennett, going to do about it?  Well, there’s certainly a strategy – indeed, the word ‘strategy’ appears almost seventy times within the Homeless Strategy, along with ‘visions’, ‘monitoring groups’ and ‘partnership working’.

The priorities, the report proudly announces, are ‘Preventing homelessness’, ‘Reduce the impact of homelessness’ and to ‘Eradicate the need for rough sleeping’…and to do this it identifies ‘key challenges’ of  a ‘shortage of affordable housing’, ‘Welfare Reform’, the ‘Rise in rough sleeping’, ‘Domestic violence’, the ‘Lack of accommodation for under 35’s’ and ‘A lack of support for people with complex mental health and health issues’…

Greater Manchester Mayor, Andy Burnham, has a huge pot of money to help deal with all this – £5.6million from the Government, plus whatever his Mayoral Fund is standing at currently. He has £1.8million as part of a Social Impact Bond to help sort ‘entrenched rough sleepers’, plus £3.8million “to develop a new city region wide approach to preventing homelessness and reducing rough sleeping”.

Salford was supposed to be getting a ‘local hub’ on the site of the old Woolpack pub in Pendleton, to be run by Coffee4Craig…but the Salford Star understands that this has fallen through, despite Burnham making a song and dance about the venture at the site of the derelict pub last June.

To conform to the Homelessness Reduction Act, which puts a duty on Salford Council to  ‘prevent’ and ‘relieve’ homelessness, the Council is going to “engage with people and services early before reaching the homelessness stage as prevention is the key”; “Allocate resources and additional support so people can keep their existing accommodation”; and it’s going to have “Early identification of homelessness risk factors, to enable early referral to the supported tenancies service to promote early intervention and homelessness prevention”…

It is also going to “Develop and agree a pre-eviction protocol between Registered Providers, Children’s Services and SHOP [Salford Housing Option Point] to agree trigger points for referrals” and “Develop and widely publicise customer pathways to prevent homelessness” by next year (!), and to support Burnham’s initiatives by 2019 (!).

The Council is also finally admitting the need to listen to people at the sharp end of homelessness, rather than officers, stating that there has been a “lack” of “service user participation”.

The Strategy also promises “Provision of more affordable housing”, although its announcement last week of 67 ‘Salford rent’ homes over five years is barely going to scratch the surface. Indeed, the Council might have got a better grip on the problem had it not hived off virtually all its social housing stock to private companies, City West and Salix Homes.

Indeed the Strategy almost acknowledges this, arguing that Government led changes to social housing “particularly housing providers having the option to use ‘affordable rents’ and ‘flexible tenancies’, the extension of Right to Buy to housing associations, and the sale of ‘high value stock’, if implemented, could potentially have adverse impact on number of people becoming homeless, and put pressure on homelessness services”.

The Council is also making some bold promises to “Reduce placement into bed and breakfast and length of stay by 10%” and to reduce the number of rough sleepers “by approximately 25% year on year” – from the current 49 rough sleepers, to 37 by November 2018, to 14 by 2020…even though Andy Burnham has promised that there will be no rough sleepers by that date.

There’s very little detail on how the Council is going to do all this – there’s certainly no mention of opening up tinned up Council properties (see here). Instead, action plans consist of leaflets, online information, staff training, a ‘joined up approach’ and a bucketful of more ‘strategies’…

Words…jargon…titles…the Salford Star has in its archive a recycling bin full of these un-kept ‘strategies’ dating back years. And there’s still unacceptable levels of poverty in the city…and still an unacceptable housing crisis. It’s hard to have faith that anything is going to change with this latest ‘strategy’. Both the GM Mayor and Salford Mayor’s reputation is resting on it…

First published in The Salford Star on 4 April 2018