By Bernadette Hyland | March 7, 2018Friends of The Meteor 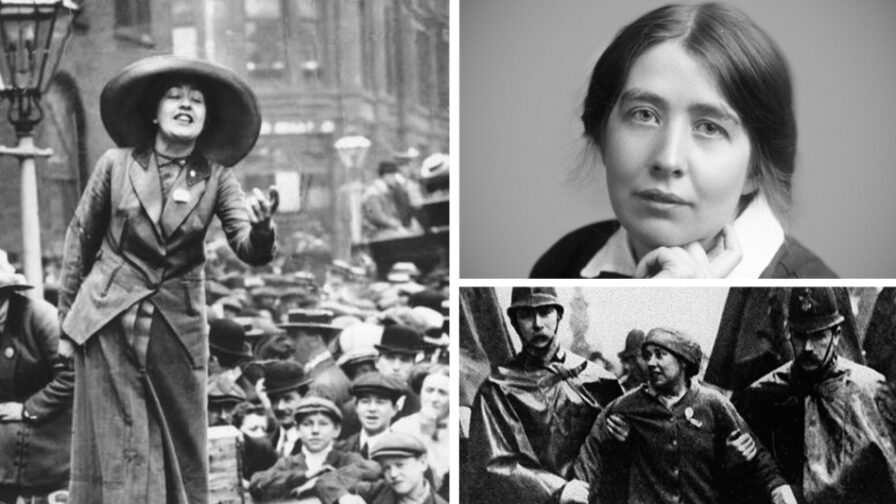 Guest article from the Lipstick Socialist:

Sylvia Pankhurst’s  response to the 1918 Representation of the People Act reflected her politics. She had opposed the First World War from the start and  spent the war years defending the rights of poor women and children in the East End of London who had  become economic  victims of that war. Sylvia believed that a partial suffrage victory was no victory at all, particularly when it left most poor women still without the vote. Her words could be echoed today by the inheritors of her philosophy and activity. Uncompromising, and offended by the legislation, she responded:

“Saddened and oppressed by the great world tragedy, by the multiplying graves of men, and the broken hearts of women, we hold aloof from such rejoicings; they stride with a hollow and unreal sound upon our consciousness.”

1918, and  the years following,  were a bad time for women in this country. The 1918 Act rewarded the homecoming soldiers by giving all men the vote,   whilst as the  war industries wound down tens of thousands of women who had been working  in traditionally male industries were bundled out of the way for men:  a miserable  reward for keeping the wartime economy going.

Female unemployment rose rapidly. By March 1919  at least half a million women were registered as unemployed, but it was probably higher as the Labour Exchanges were encouraged to refuse to register women as not genuinely seeking work. Just like in 2018. Also they could be refused benefit if they turned down work,  no matter how unsuited to their skills or how badly paid. Just like in  2018.  Many women were forced to return to domestic service – or rather “domestic slavery” as many  women called it.

In 2018 suffrage history has been sanitised. On 6  February, for instance,   Theresa May was welcomed by Helen Pankhurst, Emmeline’s grand-daughter, to the Pankhurst Centre in Manchester (the home of the Pankhurst family until 1907) to kick off their celebrations of 1918.

Charlotte Hughes, anti-austerity campaigner and writer was not invited to this event, of course. She blasts; “In my opinion it is abhorrent that Theresa May is celebrating a 100 years of some women getting the vote. Since Theresa May and the Conservative party have been in office, women have been victim to what appears like endless cuts to their income, their right to stay at home to look after children, while the cuts to legal aid and women’s aid services and refuges have forced women and children to live with an abusive partner.”

The #Vote100   events symbolise the massive gap there is between the well off women who can turn up at these events and promote their books, their businesses and brand  as “feminists”.  Absent from these events are the young women who are today’s Sylvia Pankhursts:  the true inheritors of suffragism and radical politics.

Life for young women in 2018 has improved dramatically over the last 100 years. Young women today have a personal and economic independence only dreamed of by women in 1918.

But life is still hard. I spoke to Josephine Clark, aged 23, a parent and student nurse. She is one of the lucky student nurses as she started her training when there were still  bursaries, but even with her partner working full time they, like most people, are  just one pay cheque away from economic meltdown.

She has been politicised by her grandmother, Christine Clark, a Green Party and feminist activist. “Everything I know about politics I have learnt from my Gran,” she says.   “I have voted since I turned  18 and always for the Green Party.” But working in the NHS has made her change her views. “I really like Corbyn, and being worried about the state of the NHS,  I decided to vote Labour at the last election.”

Josephine sees herself as a feminist. She cares about inequalities,  and feels that even in 2018 they are still there. “I do feel equal to my partner,  but I think that there needs to be improvements in the way women and ethnic minorities are treated.”

Student Eden Lewis, aged 19, is confident about being a feminist and holding her own against the men on her sports journalist course. “My generation is not going to let people keep us down, we won’t stand for it.” As a young woman she was involved in the “Girls Against” group which challenged sexual harassment at pop concerts. She voted for the first time at the last General Election and reluctantly voted Labour. “The Labour MP, Helen Goodman, does nothing for the area and the only other choice was Tory or UKIP.”

Eden’s mother is Lisa Turnbull, one of the most inspiring women activists of the Durham Teaching Assistants Campaign. Eden supported her Mum, not just in keeping her morale high, but wrote a leaflet for the campaign and took part in their actions. “Taking part in their campaign made me more vocal and more politically aware.”

Lauren McCourt, aged 23, is a feminist and  a prominent activist in her union, the BFAWU.  She has chosen to challenge the everyday oppression meted out to young people in her workplace, some of which has parallels with 1918. “We have zero hour contracts, low pay, and bullying managers. Unions are important to protect people against these issues.” And just as in 1918 the response from women was to get organised.  “Being in a union for a woman shows the management that women will fight back against issues such as sexual harassment.”

In 2018 some feminists are trying to turn Sylvia into a kind of celebrity feminist as shown by the campaign to get her a statue which literally means turning her Marxist politics into stone. What women need is her anger and actions to make real her socialist view of the world. The true inheritors of that philosophy is found in the words and actions of women such as Charlotte, Josephine, Eden and Lauren.

This article was first published on 1 March 2018, on the Lipstick Socialist website.

Come and hear Lauren McCourt speak on 10th  March at 2pm at a joint event between the Mary Quaile Club and the Working Class Movement in Salford. Book tickets at trustees@wcml.org.uk