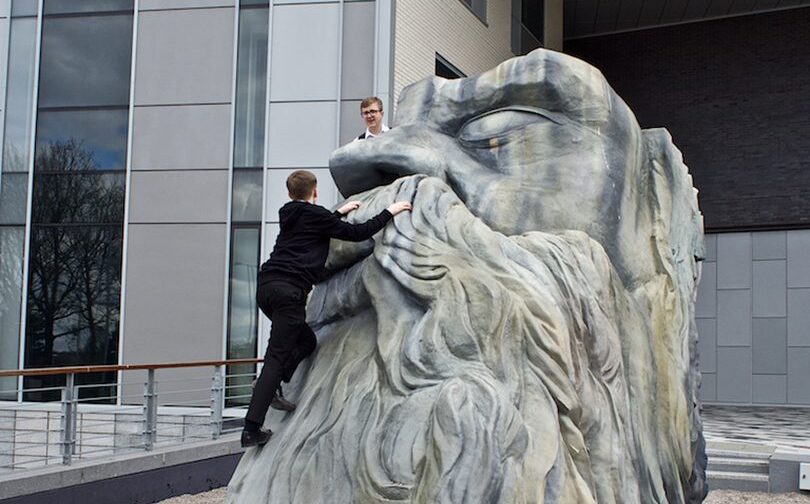 Guest article from Manchester’s Now Then Magazine. This article follows Part One, which can be found here:

The first part of this article previewed the unveiling in Manchester of a statue of communist pioneer Friedrich Engels as part of Manchester International Festival. But that statue, brought from the former Soviet Union by Turner Prize nominated video artist Phil Collins, isn’t the only example of the region rehoming statues.

Why would Manchester want a second hand statue of Engels? It’s not the first time they have tried to get one. Dave Haslam in his book Manchester, England tells of Christine Derbyshire from Central Manchester Development Corporation, a 1980s-90s redevelopment quango. She watched statues falling on television and had the idea of getting a surplus Engels from Manchester’s twin city of Leningrad, now called St Petersburg again (see What’s In A Name? in NT#8). One possible site for a statue was in front of the disused fire station near Piccadilly train station. The plan came to nothing and the fire station is still un-re-developed.

Had the plan gone ahead, it would not have been the first time Manchester had bought a statue with ‘one careful owner’. Abraham Lincoln was, like Engels, a hero to some, a villain to others.  He was sculpted in bronze by George Grey Barnard and intended to stand outside the Houses of Parliament. But the statue was judged not statesmanlike enough, so London ordered up another one. Manchester got the old one and managed to find a link between Manchester and the US President in the form of a letter he wrote to the cotton workers of Lancashire. It stood in Platt Fields from 1919 and moved to its present location in Lincoln Square in 1986. If Lincoln’s links with Manchester were slightly tenuous, Engels was positively chained to the city.

Friedrich Engels was born in 1820 into a wealthy family in Barmen, Germany, but the 20 years he spent as a radical in Manchester are the reason for statues of him. He first came here in 1842 to look after the family’s interests in Ermen and Engels, a textile firm based in Victoria Mill in Weaste, Salford. His father hoped the move would cure the young Engels of his radical politics. It had the opposite effect. Manchester was the world’s first modern, industrial city. Here, the new class of capitalist factory owners extracted as much profit as they could from workers, whose life expectancy fell as profits rose. It was here where the conflict between capital and labour was sharpest. Manchester was then, as it is now, a radical city. Engels described the place at that time as, “The seat of the most powerful unions, the central point of Chartism [a petition calling for basic rights such as the vote], the place which numbers the most socialists”.  Engels lived a double life – a respectable member of the family firm by day, radical by night.

Engels had already met Karl Marx, with whom he would collaborate and support as a patron for the rest of Marx’s life and whose work he would continue for a dozen more years, until his own death in 1895. In Manchester, Engels began the other central relationship of his life when he set up a clandestine home with Mary Burns, a working class woman of Irish descent. She guided him amongst the city’s impoverished working class. He added these first hand observations to meticulous research and the beginnings of the political philosophy he and Marx would develop. This would become his classic book The Condition of the Working Class in England. It was published in 1845 in German, but not available in English until 1887. Historian Eric Hobsbawm described it as, “By far the best single book on the working class of the period. It remains an indispensable work and a landmark in the fight for the emancipation of humanity”.

In the 1960s, a block of high rise flats in Barton was named Engels House by Salford Council and there are a couple of blue plaques, but it was only last year that Engels was honoured with a more concrete memorial – actually it was fiberglass and some critics say it dishonours his importance.

The buzzword of the defunct CMDC, who didn’t manage to get us an Engels in the 1990s, was ‘redevelopment’. Today, its private sector equivalent is ‘regeneration’ and sculptors in search of public commissions have to make work that “engages with communities”. In the case of an artwork for Salford University’s new Adelphi arts campus, this meant a five-metre tall fiberglass sculpture called Engels’ Beard. The design came from Jai Redman of Engine, a Salford arts production company. He too had read in Dave Haslam’s book about trying to get an Engels statue, and decided to make his own. Redman’s sculpture inexplicably incorporates a climbing wall in its rear elevation. Journalist and lecturer Rachel Broady described the concept as “fodder for regeneration nostalgia” and was quoted in the Salford Star saying, “At a time when Salford children are experiencing increasing poverty and a rise in Victorian diseases, I think as a city we should look more closely at the work of Engels, instead we’re invited to climb his face in what seems to be an ironic beard joke that’s gone too far.”

So does the mid-19th Century work of Engels and Marx have anything to say to workers in Manchester today? A small exhibition at The Working Class Movement Library concludes that they do. Workers are still as exploited, though globalisation means the very worst examples are no longer in Manchester.

The Radical City tour runs from 3pm to 4:30pm from Wednesday 12 July to Sunday 16 July 2017. Tickets are £10 and the meeting point is Festival Square.

The Life and Work of Marx and Engels runs until 29 September at Working Class Movement Library. The Library is open Wednesday-Friday, 1-5pm, and the first Saturday of the month 10am-4pm. Admission is free. There’s more information at wcml.org.uk / 0161 736 3601.

The first part of this article is available to read on Now Then’s website here.