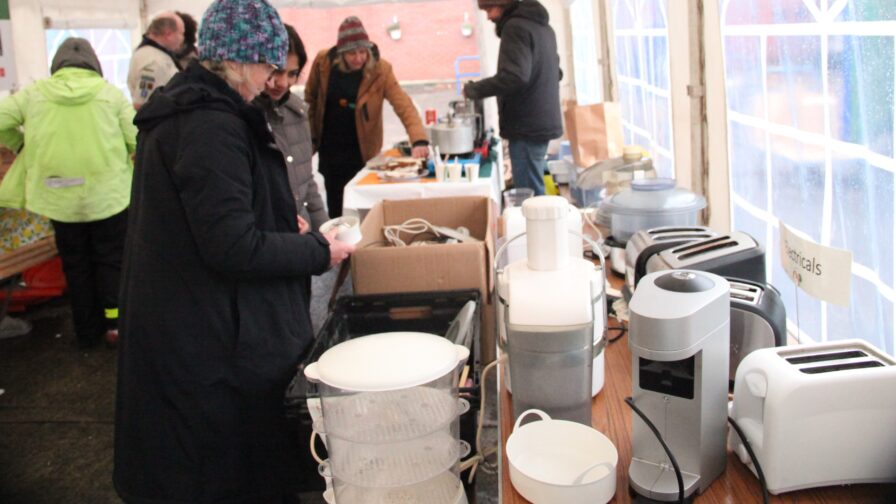 On a chilly Saturday morning, a small crowd gather outside a storage unit facility on Princess Parkway, huddled under a marquee filled with plates, cups, pots, pans and an array of electrical kitchen appliances.

Despite freezing temperatures, the scene is festive – smiling faces dish out warming soup and pass a hot water bottle around, chatting and laughing with new arrivals while showing them around the marquee’s selection – a section for utensils, a section for crockery, as well as some less familiar wares – such as a silver contraption which opens up like a robotic flower (apparently it’s a steamer). People fill boxes with kitchenware, strapping them to bikes and filling car boots. No money changes hands – it is all being given away for free.

The occasion drawing the crowd is a ‘kitchen kit redistribution day’, which took place last weekend (10 December) outside Apex Self Storage in Hulme.

Its organisers, a social enterprise called Cracking Good Food, say to “think of it like a kitchen kit car boot sale – but everything is free for community groups, charities, homeless prevention hostels and other organisations, and individuals who need it.” The kit is donated and collected from across Greater Manchester, cleaned and packed by volunteers and PAT tested before being put to use in community kitchens and people’s homes.

It’s only the second of these events run by Cracking Good Food, and they are already building a reputation.

”We already had a queue of people when we opened at 10am,” says co-director Gemma Foxcroft. Of around 25 organisations who attended to collect equipment, one of the first is Friends of Clarence Park in Bury, who have been running cooking classes with Cracking Good Food and have just moved into a new premises. They are opening it as a warm space, and at the moment the kitchen has nothing other than a fridge in it, explains Gemma. The equipment they collect at the event will now allow them to get the space up and running and serve soup to visitors.

Another group represented at the event is the Jinnah Day Care Centre, also in Bury, which runs sessions for over-50s, including two groups where participants show each other how to make cost effective meals.

Imtiaz, the centre’s manager, says, “This kind of event really helps us. We can get plates, cups, pans, mixers, utensils….” He explains that buying the kitchenware they need for the sessions they run would be unaffordable if buying new, and instead they are helping to save the kit from going to landfill.

“It’s a very useful service for us,” says Imtiaz. “We benefit from it, and rather than all this going to waste, it’s coming back to groups that we’ve established. They can use it, benefit from it and then, it can be passed on to others – so we’re kind of one stop along the way.”

By the end of the day, 2.6 tonnes of kitchen equipment is redistributed, saving it from landfill.

The Lord Mayor of Manchester, Councillor Donna Ludford, opened the redistribution event, and more than 10 volunteers attended on the day to help set up the space and pack and move the equipment. The team included the 1st Great Moor Scouts and Explorers, who had given up their Saturday to get involved. My knowledge of Scouts being patchy, I asked if there was some kind of badge earned for helping today – they replied no, they just wanted to help out.

“We’ve had a lot of smiling faces down here… Last time, it was only open to organisations, but this time it’s open to people who just need the stuff as well,” says Rose, a 16-year-old Explorer..

Lewis, a Scout aged 14, adds: “I think [this event] is very helpful, especially now with the cost-of-living crisis, less people will be able to afford the stuff they need.”

Jacob, a 13-year-old Scout, agrees, adding, “especially with all the pandemic stuff as well, things are quite expensive.”

Gemma confirms that both at this event and in Cracking Good Food’s wider work, she has seen that people are now hyper-focused on the low use of energy in their cooking.

“The use of fuel is really key to people’s decision-making about what they’re taking at the moment,” she explains.

The items most in demand at the moment include slow cookers, air fryers, and, more worryingly, camping gas stoves.

“One of the most common questions at these events is about our gas stoves – people are asking if we’re giving them away, which we’re not, because they’re not for indoor use, they’re not appropriate for using in a kitchen.

“The reason people are asking about them is because they are self-disconnecting from utilities, they don’t want to or can’t use the gas. People are so desperately concerned about their gas and electric bill, and trying to find ways [to reduce it], including using a camping stove indoors.”

“A lot of these things sound gimmicky, but they do have an impact on energy. And that is something people are talking a lot about,” says Gemma.

“We’ve had lots of community members as well who’ve heard about the event through attending our sessions, and they’ve come and got the equipment that they need to use the skills that they’ve been learning in our sessions as well. So that’s really great.”

One such lady at the event shows me her new pressure cooker as she packs it away, explaining that using a pressure cooker can reduce cooking time by two thirds compared with a pan on the hob.

As well as the practical need for certain types of cooking equipment, much of the kit being offered is simply helping to spark more fun in the kitchen.

“There’s just nothing better than getting a new kitchen gadget,” says Gemma. “Something to excite you about being in the kitchen again. It doesn’t have to all be super practical. We’ve had people taking away bread making machines, juicers, you know, things that are not strictly completely necessary, but will just bring a bit of joy and interest to the kitchen again.”

It’s this kind of excitement around cooking that Cracking Good Food aims to ignite, as part of its mission to eradicate food poverty and increase food sustainability in Greater Manchester.

To further this work, Cracking Good Food recently secured funding from the Charity Service, enabling them to run more kitchen kit redistribution events. The next one will take place in Stockport, and a Kitchen Kit Call Out will be shared ahead of the event via Cracking Good Food’s social media channels, detailing the locations of the collection bins people can take unwanted equipment to.

For anyone wishing to make a donation in the meantime, they can do so during office hours, at the reception desk of Apex Self Storage in Hulme or Ardwick.

Upon leaving the event, my mind makes its way guiltily to the back of a cupboard in my kitchen at home, and I remember the slow cooker I was so chuffed to find in a charity shop about 2 years ago. I count on one hand the number of times I’ve used it… Okay, on one finger.

I have until the next kitchen kit redistribution day to become reacquainted with it, or it will be up for grabs there instead.